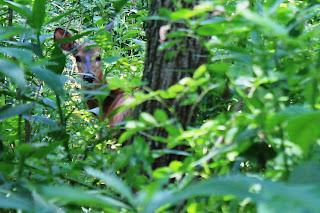 Today was a nice day and very short.  We only covered about 139 miles but we saw a lot.  First thing we did was drive to Cuyahoga Valley National Park.  We checked out the Brandywine Falls. It was nice and the rain last night helped to make the flow really fast.  After seeing many falls around the U.S., this wasn't that spectacular but still nice.  Next we stopped at the Boston Store and Peninsula Train Depot. We walked across the Everett Covered Bridge were Eric met a very freaked out snake.  The snake was sunning himself on the rock Eric just about stepped on. The snake scurried into the water and Eric maintained his balance on a different rock.  I went to the view area for the bridge and out of no where a deer jump out.  He was seriously 10 feet away from me.  He was nice enough to hang around so I could snap a picture. Next we went to the Beaver Marsh but sadly no beavers. :-(

After Cuyahoga Valley National Park we went to the Pro Football Hall of Fame in Canton.  I'm not all that excited about football...baseball is my sport...but I do root for my Minnesota Vikings and hate the Green Bay Packers.  It was interesting with lots of exhibits.

Right now we are just chilling out at our hotel...it is an early night!
Posted by KimmerBee at 5:30 PM