This vacation has been pretty laid back.  And if you know me that is not normal.   We had an amazing breakfast this morning with stinky cheese from Switzerland and summer sausage among other wonderful things.  We didn't leave the hotel until after 10:30. First stop is the University of Pittsburgh. The main reason for going on campus, besides the obviously one that I love college campuses, is because the campus still has the old Forbes Field Wall.  I love historic baseball stuff so this was up my alley. We also saw the home plate from the last game played at Forbes Field in 1970.

After that we did the  Duquesne Incline (the other incline in the city). The view wasn't as good and it cost more to go up there so it was a bust.  We got back to Station Square in time for the river boat tour.  It was nice to take a boat ride but the narrator was really stupid.  The only thing I really learned is that there are 406 bridges, over 100 bars and they love their sports teams. Only 19,000 at the game so ya they really love their teams (snicker).

The afternoon was hot at over 95 degrees, thankfully our seats were not in the sun. The game was great and it went really fast.  Not much hitting but some great defense and not too bad pitching.  We sat 3 rows behind the dugout so we got really close to the players. It was awesome. PNC Park is really nice.  It is in my top 5 list...it met all my requirements: open air with NO ROOF, a seat with a great view and in the downtown area. Willingham hit a home run in the 8th inning to put the Twins in front. The couple sitting next to us was from Rapid City, SD!!  Small world.  They are also going to Cincinnati. 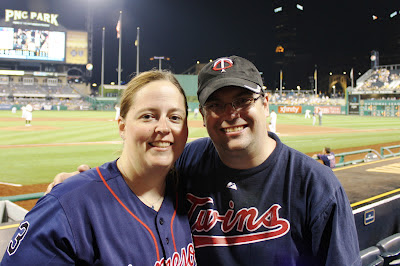