Now that we are filed, I can finally put this picture out here.  A couple weeks ago, I brought home a draft of our annual report to read.  If you have never read annual report, you don’t know what you are missing. It is EXCITING. So I was sitting on the couch reading and Swirl curled up and fell asleep on the pages I had finished.  He felt the same way about the reading as I did. :) 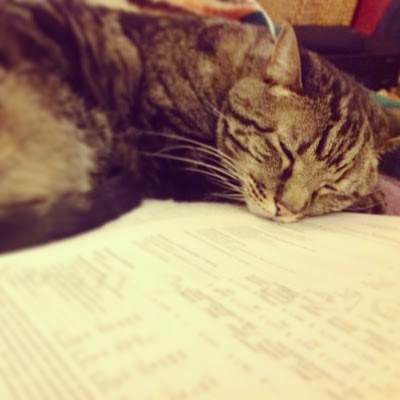 Posted by KimmerBee at 9:57 AM No comments:

He earns his keep 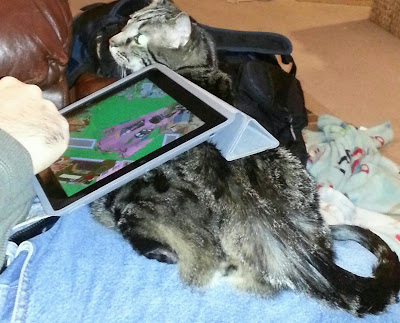 Posted by KimmerBee at 6:06 PM No comments:

The end is near!

Thank God the end of our busy life season is near.  It is a very stressful couple of months.  Now it really isn’t “over” as we had stuff to do up until the middle of May but the two major things, the 10-K (GAAP) and the Statutory Blue Books (STAT) are almost filed.  No more working Saturdays, not as many late nights. We haven’t filed yet, that will come next week but there is light at the end of the tunnel.  I have all my state forms done are and ready to mail. I have a cute picture of Swirl sleeping on pages from my 10-K document I was reading a weekend or so ago. He felt how I felt about it...boring read!  I'll post it after we have filed. (I can't do it before...don't want to get in trouble!)
Unfortunately, the end will be sad this year as the VP in my area was let go effective the first week of March. It is such a sad thing. She has been the best leader ever. She is compassionate and supportive.  She went to bat for us on numerous occasions. It is a very sad day indeed.  She will be ok though. She said she is looking forward to golfing with her daughter and playing on their new jet skis.
Another sad thing is my team is being split up between the GAAP side and STAT side.  It puts me in a pickle because my job is really 50% GAAP and 50% STAT so I’m not sure what that means.   I’m trying not to worry because the work I do still has to get done. I’m trying to be optimistic but some days it is a struggle.
Eric was supposed to have class tonight but it was cancelled because of the snow.  Shucks, there goes my evening of being alone. LOL! I guess I have to drag him swimming. And dinner…what to have for dinner?  Now that he will be home tonight I actually have to make something instead just cereal. Lent is so tough. Cheese pizza I guess.
That’s about it from here.  I’m looking forward to having a work-free weekend.  But I’m sure I’ll be working in the house. I have lots of housework.
Posted by KimmerBee at 4:13 PM No comments:

Typical male…it's hard to see but he is trying to figure out how to turn the page on the swimsuit issue.  I wouldn't have taken him as a Kate Upton fan. 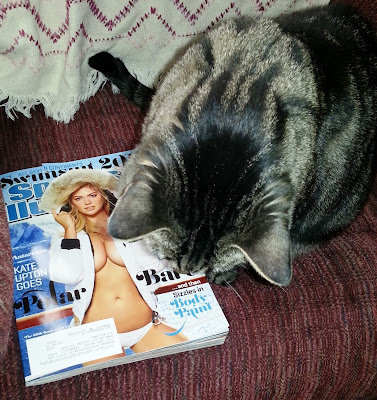 Posted by KimmerBee at 12:23 PM No comments:

Happy Valentine’s Day!  We had a nice dinner at Turtle’s restaurant.  That was the excitement of the day.  Turtle’s isn’t very romantic…but what am I saying.  Eric and romantic never get used in the same sentence.

This morning was rough.  The traffic was terrible, the roads were icy and we saw 3 accidents.  We got to Eric’s work place 15 minutes late which means I had to take the bus from his work place.  But I had a 20 minute wait so I went inside Eric’s work place to stay warm.  The ladies he works with were really giving him crap that he should have taken me downtown. And that he wasn’t a nice husband. LOL!  They harassed him all morning.  But truth be told, it was a nasty walk to the bus stop.  The sidewalk wasn’t cleaned off so it was packed ice and snow.  The bus was 5 minutes late and it sat idle for 5 minute while the bus drivers swapped out.  I got to work an hour late.  Oh well.

This week has been odd.  Sunday was a big storm, rain, snow, sleet…all the good stuff.  Monday the Pope announced he was going to resign effective February 28. Yes, he is resigning.  Here is a cute cartoon I found on facebook…it is hilarious. 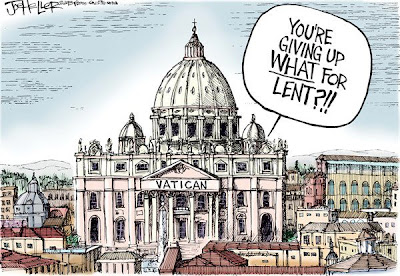 Tuesday was Mardi Gras. We celebrated by going to Don Pablo's. It was delicious.  After that I had a volleyball doubleheader. We only had 5 players but we won 6 out of 7 games. We were on fire! Wednesday was Ash Wednesday.  Eric met me for Mass.  As always, we went swimming.

That’s about it from here.
Posted by KimmerBee at 8:32 PM No comments:

And then it was gone

So this picture really doesn't do my new hair style justice. I think it is really cute. I feel like 10 lbs. have been lifted from my head...maybe I should go weigh myself. LOL! 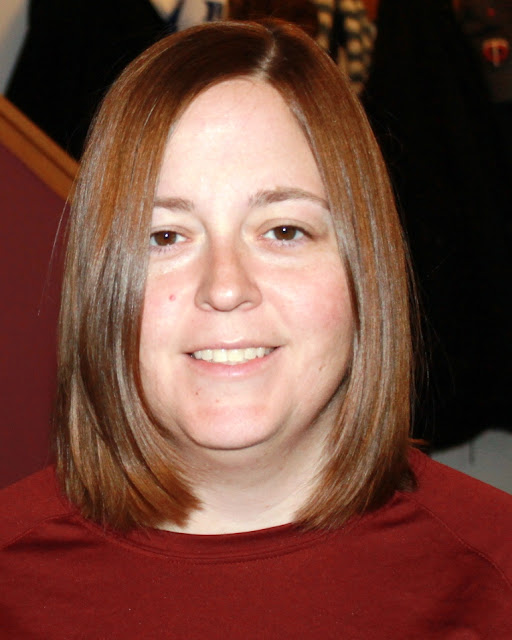 Posted by KimmerBee at 3:33 PM No comments:

Last night we went to the Broadway hit musical the Book of Mormon at Orpheum Theater. This is the first time I have been to the Orpheum.  That is sad considering I have lived in the Twin Cities for over 12 years. The show was raunchy but funny. It was written by the guys who created the show South Park. So what you got was a South Park episode but live on the stage.
The story was pretty funny.  It is about these two Mormon Missionaries Elder Cunningham and Elder Price. Cunningham is an overweight nerd and a compulsive liar who is completely hopeless at sticking to the approved dialogue. Price is the superstar Mormon kid who believes if he prays enough, he will be sent to Orlando for his two-year mission.  But to Price’s shock and horror he was paired with Cunningham and they are sent to Uganda.
Once they get there, Price has a vocation crisis and runs away. Meanwhile, Cunningham starts telling the people his version of the Book of Mormon because he never actually read the book himself.  He would make up stories about Joseph Smith that the Ugandan people could relate to. For instance, he told them Joseph Smith also suffered from AIDS and had sex with a frog and was cured. Or that he died of dysentery.  These people bought it and got baptized.   The Mormon Church was so surprised and happy that they got these new converts that the Head of the Church went to Uganda to meet these people.  The new converts decided to put on a play about the Book of Mormon for the Head of the Church.  Well as you can imagine…their play was based on all the stories (lies) that Cunningham told them. LOL!  It was funny.  But as I said very raunchy and downright vulgar.  Definitely not kid friendly. You have been warned.
Posted by KimmerBee at 8:40 AM No comments:

Swirl and the Pineapple

Swirl is a very strange cat. For the first 7 or 8 years of his life he was a quiet cat, he barely meowed except when he had his toy bee in his mouth.  Lately though he has been very vocal. Swirl loves to chew on the crown of pineapples. I'm not sure why but he goes nuts for it.  Yesterday I bought a pineapple and I put it in the fridge. As I was putting away the other groceries, I turned around and he jumped in the fridge!  Of course I snapped a picture before I kicked him out. After that he stared at the fridge and meowed.  What a crazy cat! 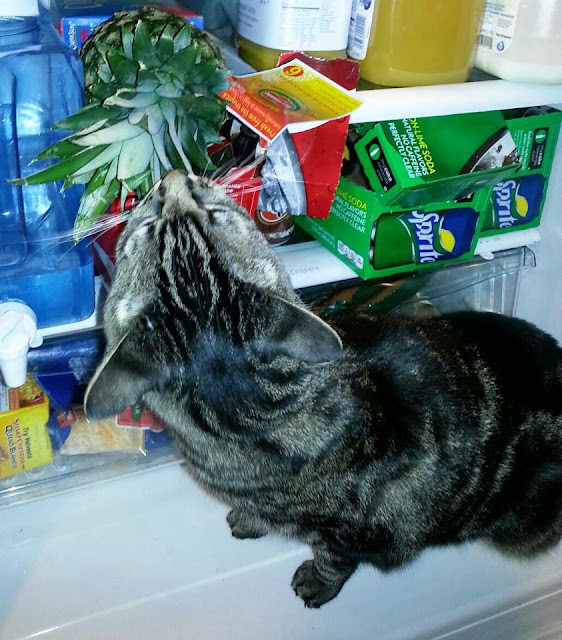 Then I moved the pineapple up a shelf.... 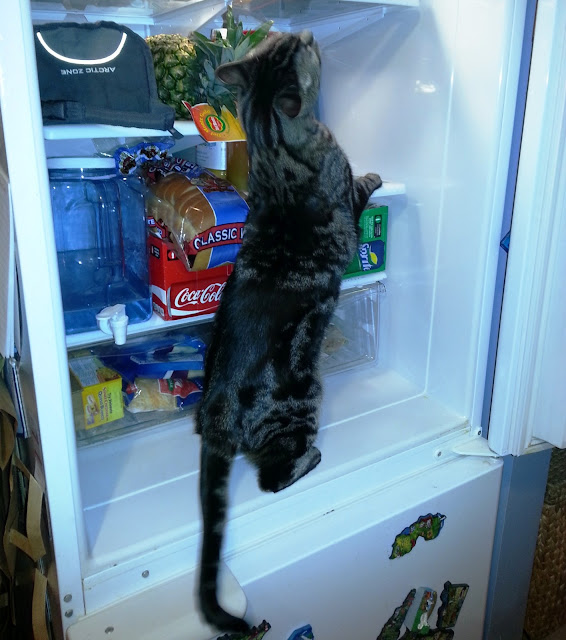 Posted by KimmerBee at 4:09 PM No comments: