Well I officially quit yesterday.  This training sucks.  Eric and I went for a run and he blasted past me and was finished 10 minutes ahead of me and he ran further than me. I was angry the entire run.  I was mad that my volleyball team had to forfeit our games because everybody was sick, injured or out of town, (which was the only reason I was out running in the first place). I was mad because I was slower than normal, I was mad because I was in pain and I said many profane words along the way.  Thankfully I was at the wildlife preserve so nobody could hear me…well maybe the few duck hunters out there shooting at me probably did but that is ok because they scared the crap out of me every time they shot at the stupid birds. You would think that hearing guns going off we have kicked my butt into gear but it didn't. Instead, I screamed from the top of my lungs "I QUIT!" Now I don’t think I was smiling when I said it and I know for a fact there was no rainbow over my head or a smiling star (I thought this was cute). 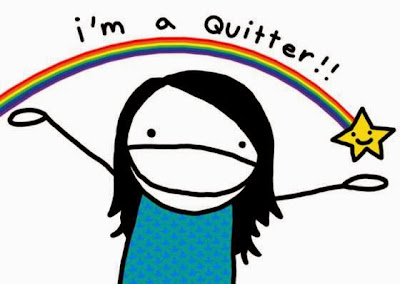 I was just really upset.  My time was so slow and I was furious. Eric tried to be nice and walk…yes walk…water to me but I was so upset I said "NO! I’m no done yet!"  He really takes abuse from me whenever we go running "together." We never really do it together...either I'm mad at him for blasting past me and leaving me or I'm mad at him for running with me because I know my pace is too slow for him...he really can't win.   I’m so much happy when I’m alone.  When he comes along for a run, all my ugliness comes out. I’m so angry at his ability to go out and run 3.5 miles in less time than it take me to run 3 miles. I'm angry that he can do this even though he hasn't run since the triathlon which was over 6 weeks ago.  I have been “training” for 6 weeks and I still SUCK! It frustrates me.

But I’m better now.  I came home and after another meltdown, I registered us for a 5K on Thanksgiving Day in Omaha and a 5K on New Year's Day in Minneapolis.  Now that I’ve invested into these two races, I can’t quit.  So let’s just say I temporarily quit.  And I quit in the middle of a run and continued running so is that really quitting?!  If I was a true quitter, I would have turned around and walked back. And actually after I said those words (around mile 2), I ran better and I felt better at the end of mile 3 and actually wanted to keep running.  See here are my splits...SLOOWWWW.

I ended up in bed at 8:30 last night.  Having all these meltdowns and being angry is tiring!
Posted by KimmerBee at 8:32 AM