My Teams are Winning!

Well this week could have been another boring week but I have had a lot to celebrate to make it not so boring. If you forget about the team in purple (Vikings), all my teams won this week. 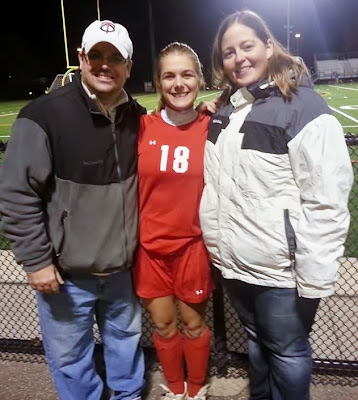 Let’s start with Eric’s niece, Abbie.  Her soccer team (Mankato West) made it to Minnesota State Soccer Tournament.  We went to their game Thursday after work (yes I skipped band!). Eric and DJ had prepared me for the game saying they aren’t the greatest and LaCrescent was a good team…blah, blah, blah.  So sadly, I wasn’t very optimistic going into the game.  First thing first, Abbie started which is a shock…well this year it is because she is on a different team this year.  She was all conference and all city last year but moving schools and a new coach hindered her playing time.  90 freezing minutes later, Mankato West won 5-2.  Say what?  Yep!  They won and now they are going to the Metrodome! Whoop! Here is a pic:

This morning I was happy to see my hometown team football team won their first round playoff game.  The team isn’t the best but the beat the No. 1 seed CFC.  Very shocking and exciting. I hope they do well the rest of the way.  I have a vested interested because my cousin is the head coach…go John!

And then today the Gophers shocked the world and beat Nebraska.  Eric isn’t too happy about that…I’m still in awe that the Gophers managed to beat them.  When it comes to Big 10 play the Gophers are a laughing stock.  Now they have beat Northwestern and Nebraska…are they turning things around? I hope so!

So what else is new this week? Well on Wednesday, my official weigh in day, I lost almost 2 pounds since my last weigh in…very excited. I was down another pound since then but after all the crap I ate today I’m sure I’ll gain that back. :(

Training Update:
This week is a rest week which means I do less miles.  I’m not really sure if I’m at the level where I deserve a rest week but I took full advantage!

Sunday was a run day.  I mentioned this before…hills in Arcadia…almost killed me. I did 3 miles. It was cold and frosty.  Monday was an off day. Not that I wanted to but I wasn’t feel well.  Tuesday was a doubleheader in volleyball and we only had 4 players.  So I got a good workout.  Now we only have single games so I can’t count on that being my workout.  I really don’t burn that many calories playing. I probably lost a pound of skin on floor from my elbow.  People ask why I don’t wear knee pads. I always reply, why do I need them, I always land on my elbow.  Wednesday was supposed to be a swim day but I worked really late. However, I managed to do 30 minutes on the elliptical.  The old me would have said, Eric take me to the closest fast food restaurant and let’s veg on the couch and watch TV.  But the new me dragged Eric to the community center for a workout! As I mentioned above, I took Thursday off for the game.  Last night I did a short swim.

Today I broke another running record.  I went 6.5 miles and I ran most of the first 4 miles.  The last two were not as good.  I was fighting a strong cold wind.  I was colder on the last mile than I was the first mile.  My splits are below. Like I’ve said before I’m very SSSSLLLLLLOOOOOWWWW!  But I’ve been reading some other blogs of slow fat runners (their words, not mine!) like me and they post their splits with pride. So I will too. By the way, I’m faster than most of those other people so that made me feel a little better. I find it interesting that my last mile was faster than my 5th mile. I must have done a lot of walking in mile 5! I must have run the 1st mile too fast since I slowed way down. I'm a little disappointed in that. 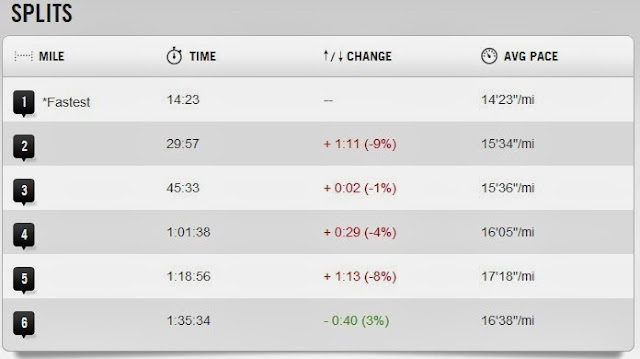