2.5K at State Capitol
The first race of the challenge didn’t scare me, a 2.5 K or approximately 1.5 miles. Easy peasy! I ran the entire race, even the hills and there were hills! It was a great run to start this challenge. My time was 16:05, an 11:03 pace. DJ and I finished together. It was nice to have a race that was fast again. I know that it was a very short race but that was the fastest mile since April. I left happy! We stopped at Davanni’s for a late dinner before heading home for the night.

10K
The first race yesterday was the 10K. I’m so relieved that the first race was the long one.  The start was cool but the humidity was very high. There were about 1,826 people doing the 10K. It seemed a bit crowded but I guess not. My goal for the 10K was to finish before 1:30 and finish with DJ. We did a lot of run/walk intervals which was good. The course was an out and back (my least favorite). It was very straight but had some hills, long hills. I didn’t realize that it was like that. We saw the first half marathon finisher on our way out. There were water stops in the right spots at miles 1, 3 and 5. But there wasn’t much crowd support. It was long stretches of loneliness. We ran it faster than I anticipated and finished in 1:22.19. We had short time to grab a banana and some nut rolls before it was off the 5K race.

5K
The 5K race was so hard. The time between the two races was about 15 minutes. I switched shoes, I’m not sure if that helped or not. The 5K was actually smaller than the 10K with almost 1,500 runners. I would say a third of those were doing the Starlet Challenge. I noticed that there was a lot of walking by us challengers. I think the break was hard for us. If I had some food and was able to immediately start the 5K I would have been better. Seeing so many walkers really played on my brain and we walked a lot too. There was two water stops and I needed them both. Again it was an out and back course…the same course as the 10K except the turnaround point is obviously closer.  It was my worst 5K since I started running back in September 2013.

Overall and Pictures
My overall time for the 15K yesterday was 2:05 minutes…that is 8 and a half minutes slower than the 15K I ran in April. But again, there was the 15 minute break in the middle. My race Friday was great. 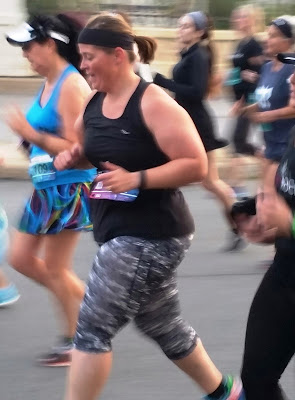 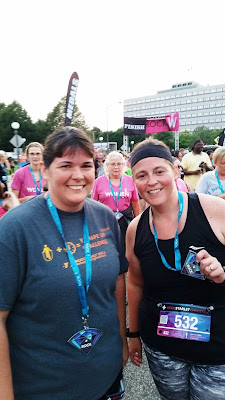