A reunion of old friends

This weekend we camped at O’Neil Creek Campground in Chippewa Falls, WI. My friend from grade school/high school has a permanent site there. Our site was right across from hers on the creek. The site was small but it was very nice. It turned out to be a very hot weekend! We got to the campground around 7pm. Jenny came over immediately and gave me a hug. Her appearance hasn’t changed since school. I hadn’t seen her in 19 years; it has been way too long. We quickly put up the tent. I was a bucket of sweat since it was so hot and humid. I seriously considered jumping in the creek! We took a walk around the campground with her three year old, Natayla. The place is huge. There are over 270 permanent sites and 50 or so weekend sites. We caught up on the last 19 years of our lives. After the walk we just sat around the fire, well not around the fire, it was too stinking hot! My friend Dawn was there too. She is the one that got me into trouble!  Haha. She has MS so has a hard time getting around. Earlier this week a heavy industrial door shut on her Achilles heel and she required 7 staples! We finally called it a night at midnight and went to bed. By that time the air temp had cooled quite a bit. It was still very humid though. It wasn't too uncomfortable sleeping weather but our next door neighbors set up their party right next to our tent…and I mean right next to our tent. And they conversation was annoying. At one point they were describing the new Vacation movie and got a main plot wrong. I was tempted to unzip our window and tell them they were wrong but I didn’t. I finally feel asleep around 1am and was up at 2:30 to use the bathroom. The one thing that I hate about camping…having to pee at night. Ha! I feel back to sleep and didn’t get up until 8am.

Jenny made breakfast burritos for breakfast. It was delicious. I just had egg, cheese and bacon…no spicy stuff for me. But it was a mistake to eat that and then go for a run…not a smart move! Eric and I drove over to the Old Abe Trail for our run. It was such a struggle. It was hot (80’s) very humid (83%). It was so bad that I had to stop every half a mile to take a drink. The breakfast didn’t sit well with me; I wanted to puke the whole time. I think I would have felt better. I know now no breakfast burritos before my long runs. I’ll stick to my toast and Nutella! My pace was almost 13:30 for the run…not great.

After the run, we came back to the campground and waited for Mandi to arrive. She had planned on camping but her husband is suffering from gallstones and is actually having surgery on Monday to have it removed. But she didn’t want to miss out so she came up for the day. Once she got there we went tubing down the creek. The water was cold but felt so good with the 90 degree temps. We floated down the creek twice. It was so much fun! I love tubing! 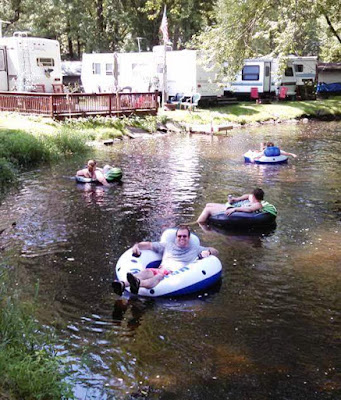 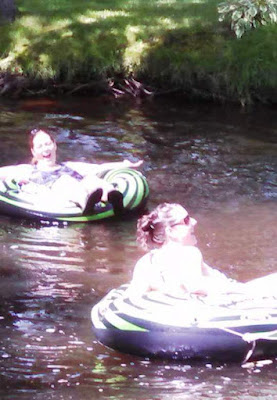 After the second time we just put chairs in the creek and talked about the past. Around 4pm was the “train” ride. The train took us all around the campground. 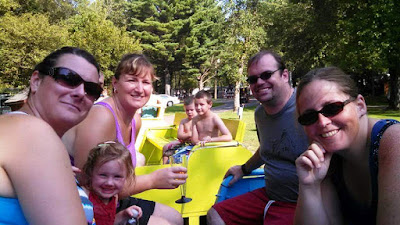 Monica showed up about that time. We had hot dogs and cheddarwurst on the fire for dinner. We talked about where all our classmates are now. We took another walk around the campground. We found Noah’s bike at another site so Eric said he would ride it back to Jenny’s site (Noah is her son). I think Eric found himself some new wheels and helmet! 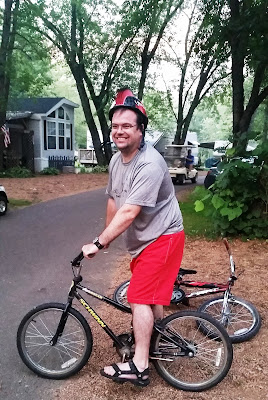 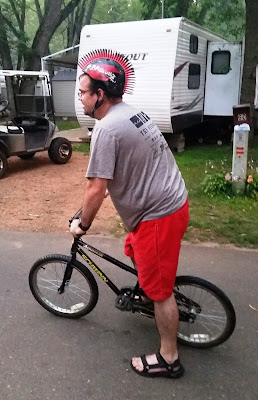 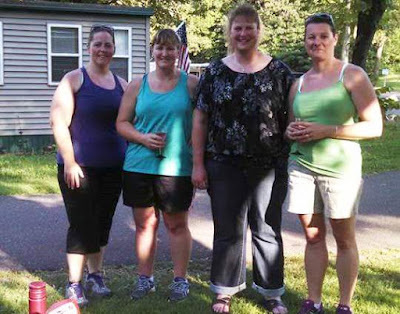 Mandi left shortly after that and Monica joined us for the lighted night “train.” Eric and I spent a lot of time talking with Jenny’s oldest daughter, Theresa about sports, mostly track and field. Once she got out of her shell and book, she had a lot to say! We spent the rest of the night around the fire. At midnight I was exhausted and went to bed. Monica went home shortly after that. She is a night owl! Again, the temperature cooled down that it was comfortable sleeping but again we had the annoying neighbors on top of our tent. Argh!

Sleeping last night was much better. I made sure not to drink too much water after 7pm. I have to remember to do this when I camp so I don't have to wake up at 3am to pee! This morning, after we put everything away, (I think the tearing down is so much hard then putting up. I again was a bucket of sweat) we had a big breakfast of blueberry pancakes, bacon, sausage, fried eggs and hash browns. It was all good. Natayla wanted to go for another walk. This time we covered the whole campground. Shortly after that we came home. It was a great weekend!
Posted by KimmerBee at 12:17 AM