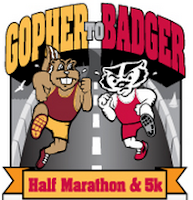 The Start
We had a very early morning wake up for this race as parking was in Hudson, WI about an hour away from our house and we had to catch a shuttle bus to the start. The last shuttle bus left at 7:20. So we were up and on the road before 6. It was a cool morning but very humid! There were about 500 of us running the 5K. We started at mile 10 on the half marathon course. The start was very secluded and the timing mat was very small so we all had to funnel over this little mat to start the race. We ran about a mile before the first water stop. I didn’t need water but took some anyways. The mile one marker was just before the entrance ramp to the I-94 Bridge. The first mile split was 11:18 which is the fastest I’ve ran since April. I had a 11:19 at Torchlight. This race was very similar to Torchlight as I compare the two.

The Middle
The Middle of the race consisted of the I-94 Bridge. I am not a big fan of running over the bridge. I’m not sure why, maybe the semi’s whipping past us at 70 mph or something like that. And there isn’t much of a wall. Just the standard size concrete barrier that is what 2 feet tall tops. It is a bit frightening. In addition, other people were using this narrow pedestrian bridge. Like the two bikers who seemed annoyed that we were in their way. I actually stopped and moved over so they could ride past as they were kind of huffy. The total distance on the bridge was about 0.6 miles and it took me about 7 minutes to cross.  Mile 2 was just on the other side of the bridge after you run under it to get into Hudson. My time was 12:06...about 3 seconds faster than Torchlight.

The Finish
There was another water stop around the end of mile 2. This time I took water and put it on my Buff to keep me cool. Like I said in the beginning it was cool at about 65 degrees but 95% humidity which made it stuffy and sweaty.  Somewhere around this time Eric took off on me. That was fine with me. The last mile was along the St. Croix River to Lakefront Park. At the mile 3 marker we had to run up steps. It was a killer for me and I only ran 3 miles. I can’t imagine how demoralizing it is to see steps at the end of mile 13!  Mile 3 was 11:52 which was 21 seconds better than Torchlight! I tried my best to sprint to the finish. And I did ok. I finished under 37 minutes which was a relief and my average pace was 11:41. Not a major improvement from last week race or Torchlight but I’ll take it. 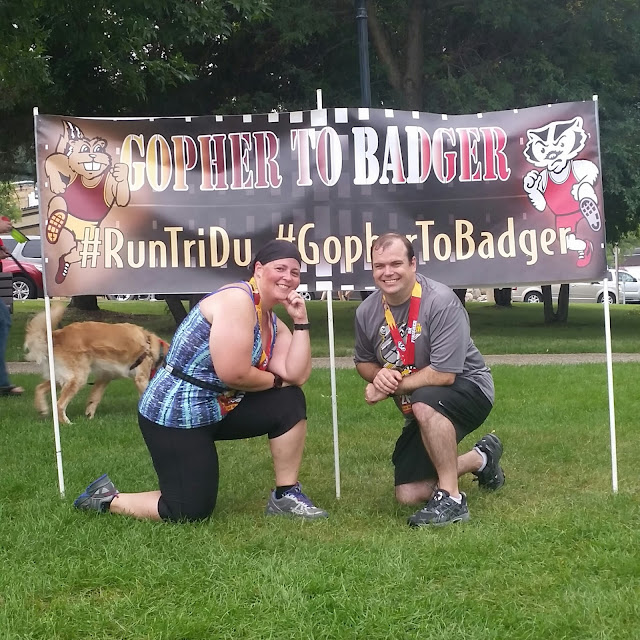 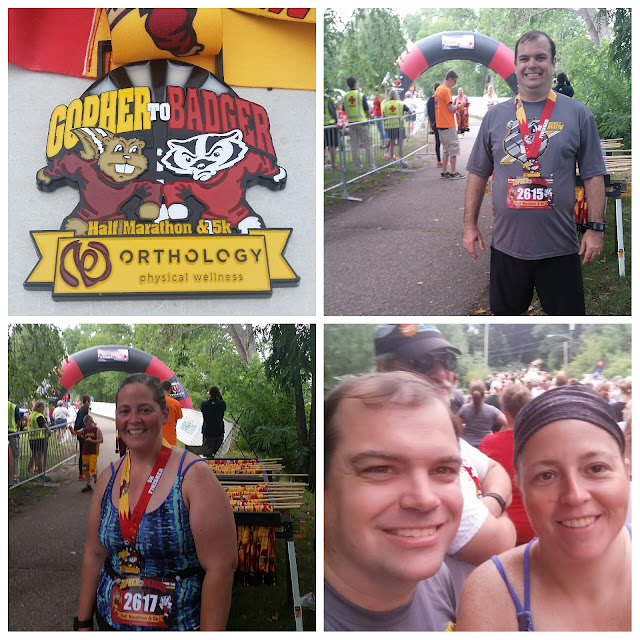 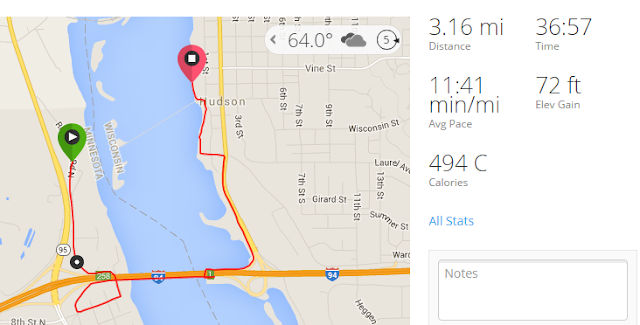