This weekend was filled with adventure and family. Friday night we drove down to Mankato to pick up our packet for the Zombie Run. We had pizza at the house with DJ and kids and Danielle. We spent the night at DJ because we had to be at the Zombie Run in the morning.

Zombie Run Mankato
Well this race wasn’t really about time and as such I’m not even sure what my time was. I think my pace was like 19:00 per mile and I think we did 1.25 miles. I’m not really sure. This was a challenge. The course was entirely on grass, mud and sand. There were zombies all over that you had to dodge so you did more side stepping then running. It was really a sprint through the zombie field, then walk to the next one and sprint again. So I guess it was more like a speed workout. Ha!  We had to run through 2 buildings, one had a maze and it was dark and there were zombies. The killer was the steep hill that had no really path and we were walking sideways trying not to slide down it. Pulling on trees to make sure we can get to the top. Oh and through brambles. It wasn’t the best part. On top there was a water stop. I never imagined I’d need a water stop on such a short run but it was really hot and it was more of a workout than I had expected. We finished with flags so we all got a corny “medal” that says we survived.

Packet Pick up!
After the Zombie Run we headed for Downtown Minneapolis to pick up our Minneapolis Marathon Relay packet. It was a busy place. We also pick up our stuff for Women Rock and Monster Dash. We got some stuff. I got a nice headband for Women Rock and we got the nice gray Marathon Training tee. It was a fun time. We drove the race course and checked out the exchange areas and our plan for picking people up and picked up some Chinese food and meet Beth, Abbie and Abbie’s teammate at our house. We had a fun house! We called it an early night since we had an early walk up call. The race started at 6:30 so we had to leave the house by 5:30 at the latest. 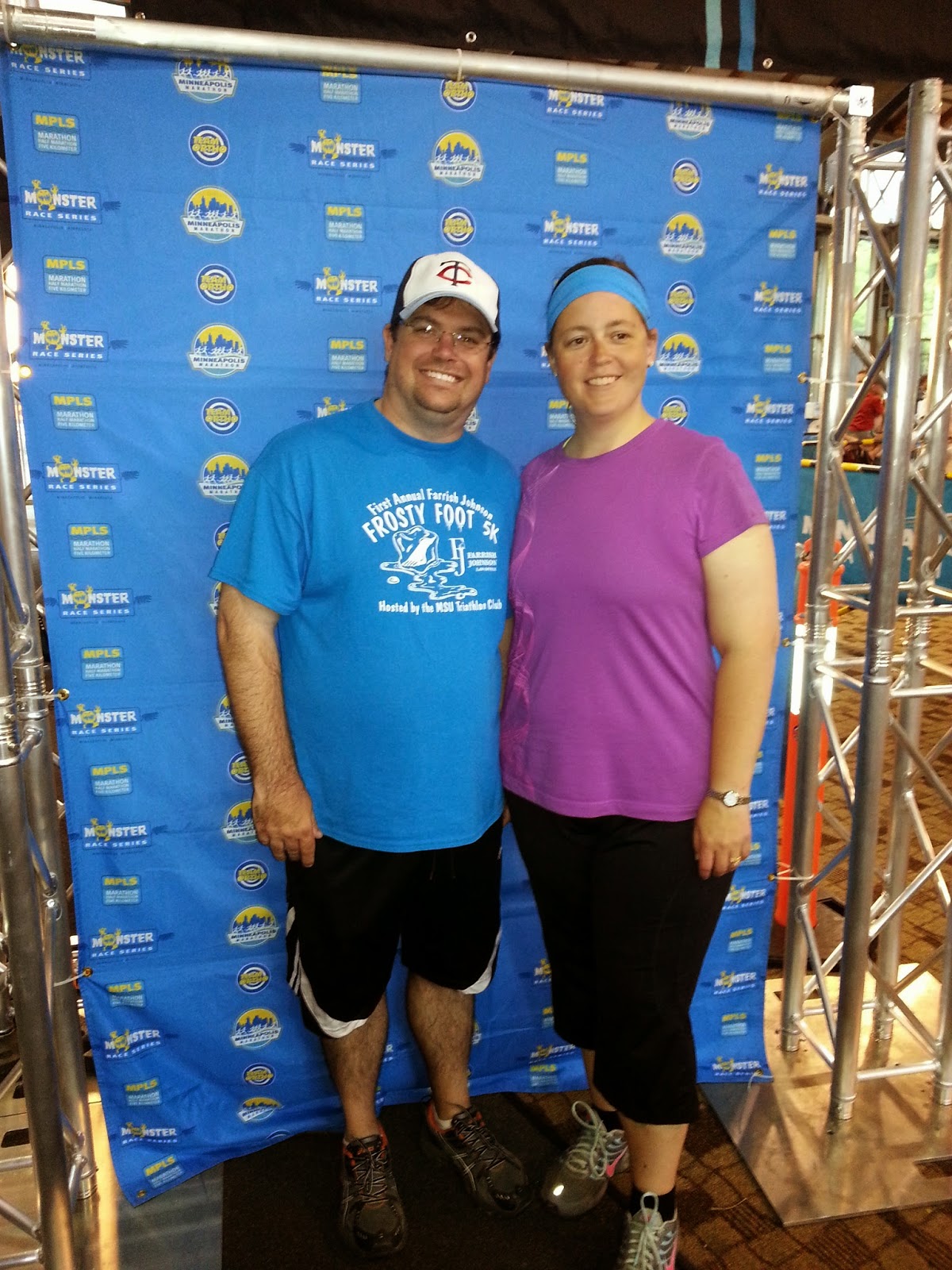 Minneapolis non-Marathon
I was rudely awaken at 4:15 am by the National Weather Service because there was a flash flood warning for my location. Really?  You had to call me? Where did I sign up for this?  I was mad! I tried getting back to sleep, even though it would only be for an hour at most. But then the rain came. And it was the type of rain that I probably would have slept through if I was sleeping but since I was up there was no way I was getting back to sleep. So I grabbed my nook and started surfing. At some point the marathon time was delayed an hour. I changed the alarm clock up an hour since Eric was still sleeping. Man he can sleep through anything! I went downstairs to let Brenda and DJ that the race was delayed an hour. They were already ready to go so we went to Caribou for our morning fix. It was pouring when we ran out to the car but when we got to Caribou, which is less than 2 miles away. It was not raining. We sat around there for a while talking about the day and I kept checking for a cancellation. I forgot to mention we were getting a lot of lightning too. Nothing was being updated. So we went home I put on my race gear and got Eric up. We headed out the door and made our way to the drop off point for the start. We wished Eric good luck and said we would see him later. We drove to place along the route at mile 2 or so and hunkered down for the runners. Well they never came. The course marshal said that she didn’t hear anything about cancellation so we waited. Then there was a car that was driving down the parkway. She stopped him and said he had to get off because there was a race coming through very soon. The driver said there was no race and the first water station was already taken down. Poor communication! Well we got in our car and started driving down a different street and then we saw the hordes of runners. Some of them decided there were going to do the course anyways. We panicked because we didn’t think Eric would have decided to run but we were not sure. So I jumped out of the car and ran toward the start line to see if I could find Eric. I never saw him. HE wasn’t anywhere to be found. Thankfully Eric and DJ share the Williams’ brain and DJ instinctively knew where he was. Very bizarre! So we found Eric on a park bench about a half of mile down the road from the start line. I never would have thought of that. We drove downtown to get our medals (I earned it!), stopped at Caribou again and drove down the last part of the race route. There were runners running it. Good for them. We drove. LOL! 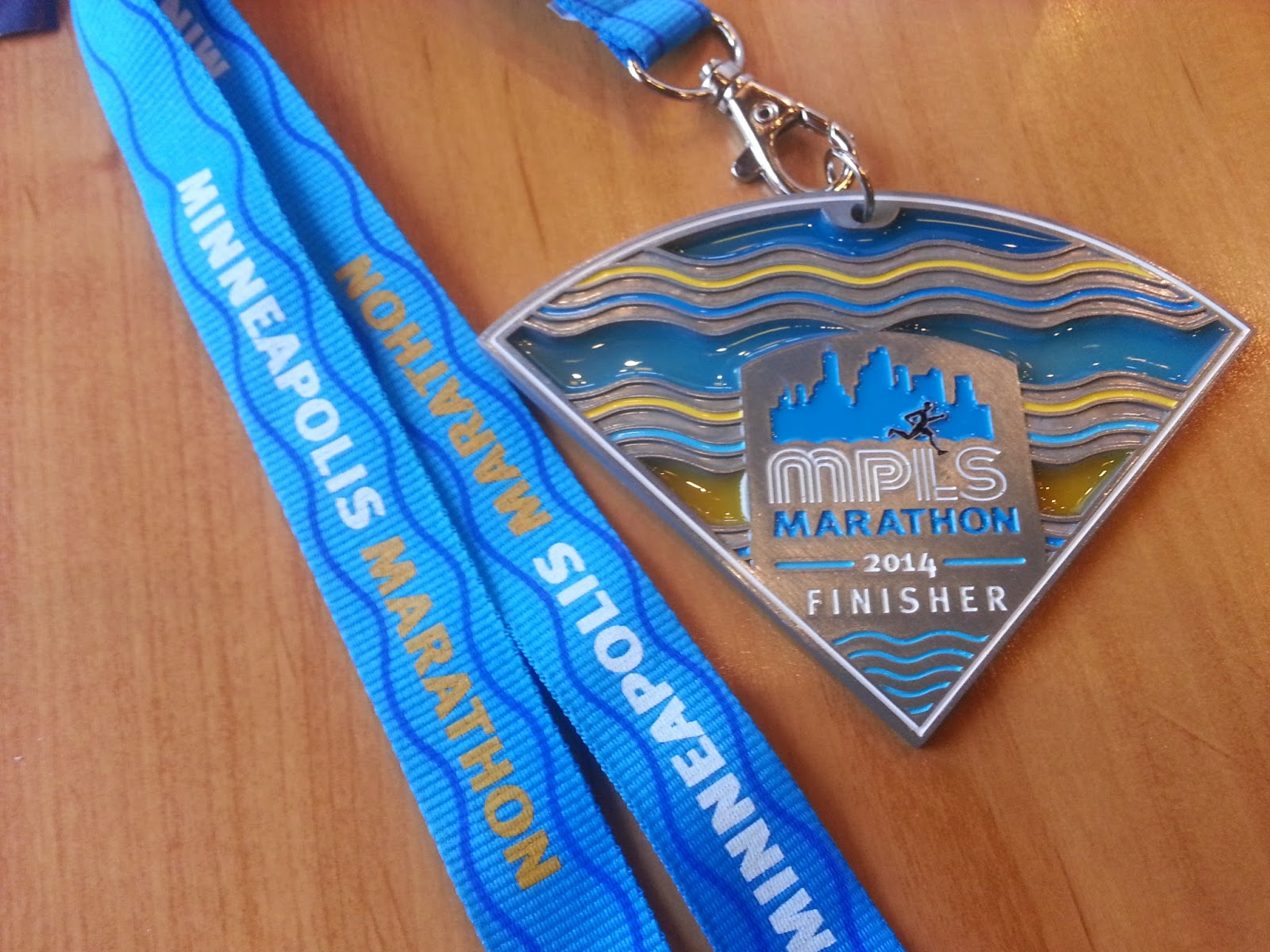 Minnehaha Falls
We stopped at Minnehaha Falls. With all this rain I was figuring it was going pretty good. It was!  It was busting its banks!  Crazy! 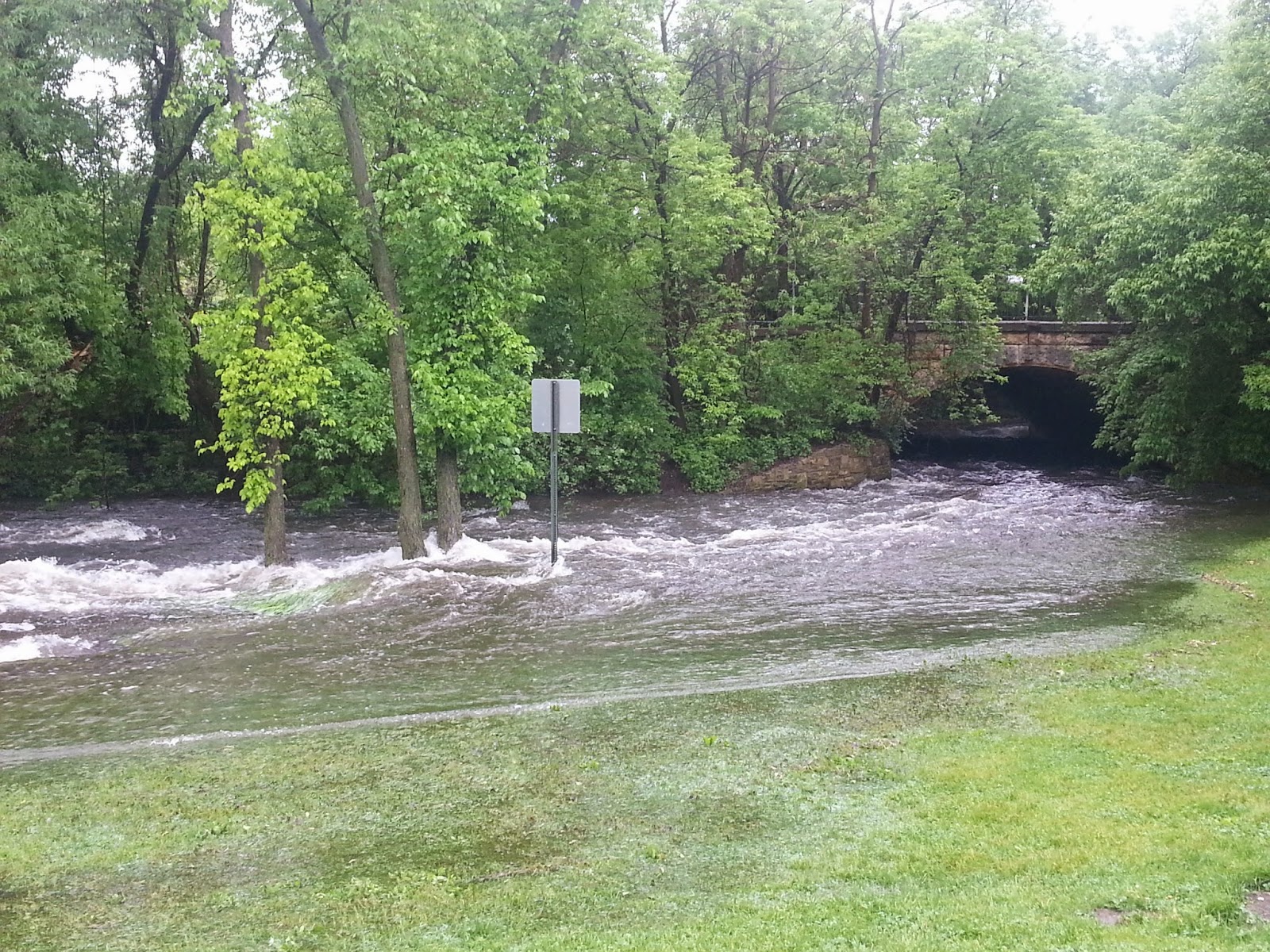 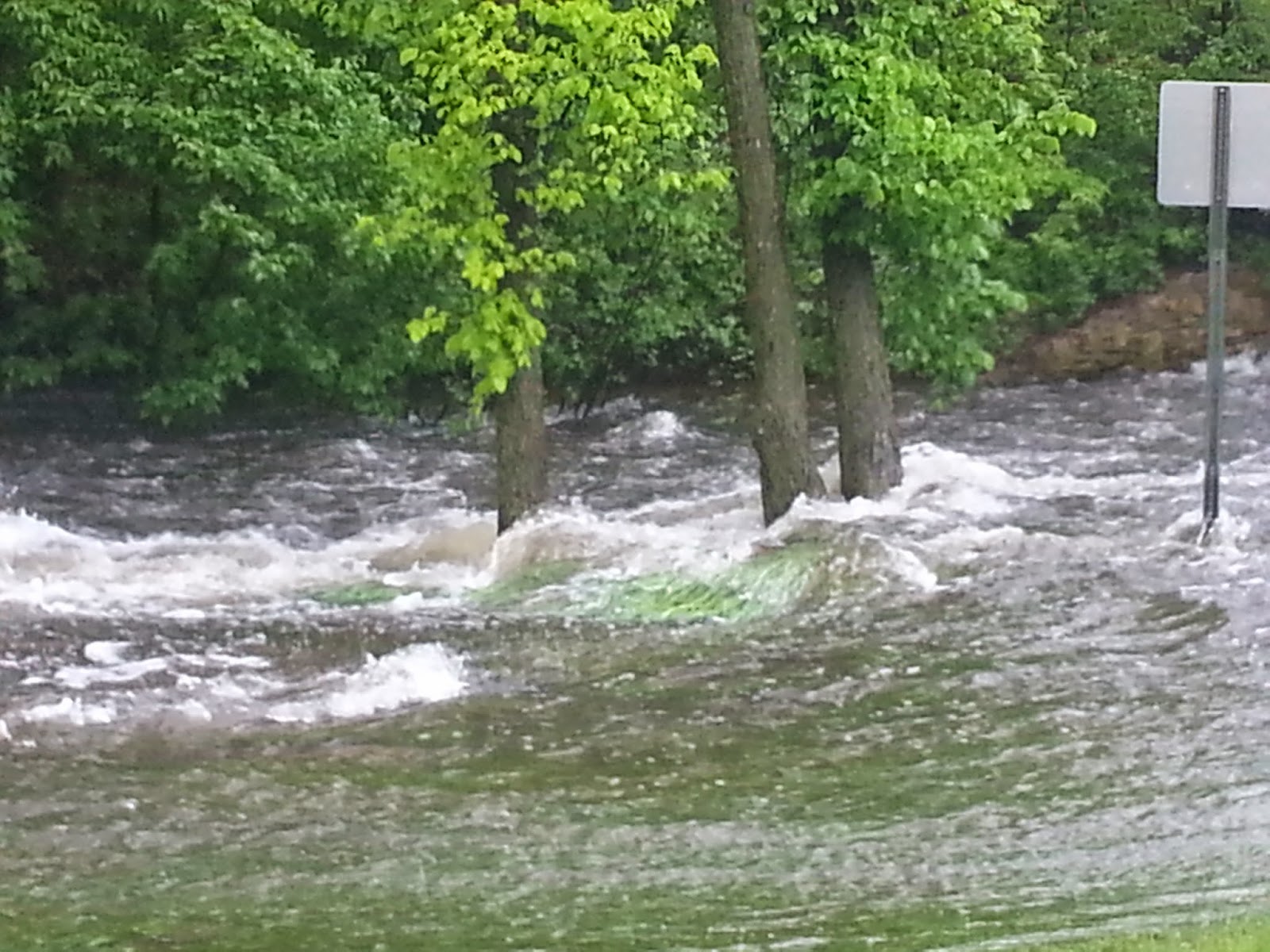 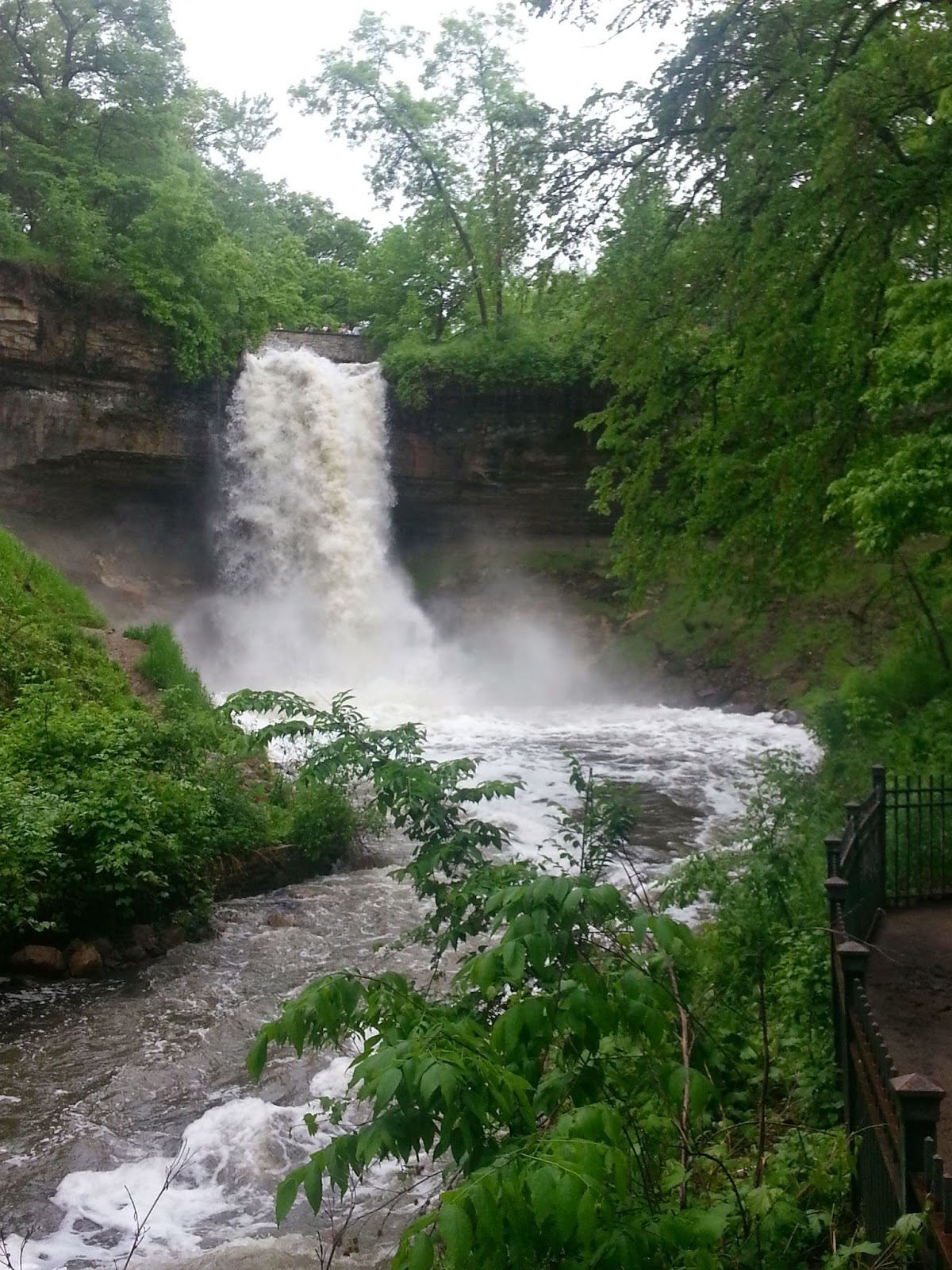 So we got home and DJ and the kids went home. Abbie’s soccer games were cancelled too. Eric and I just lounged on the coach watching movies the rest of the day. I never did go for my run.
Posted by KimmerBee at 8:29 AM