So I have 2 more days of work before our big trip and I have packing dilemmas. What to pack, what weather to plan for and should I take the scale. Yes, I said scale. I’m going to be away from home for many days and I don’t know if I can handle not know my weight for that long. I’m addicted to the scale. It isn’t just an easy yes or no question. I have put some thought into this. There are two ways of thinking.

Option 1 ~ Don’t take the scale
If I don’t take the scale, I will go willy-nilly and eat a ton of crap and gain 15 pounds…No I’m serious here. 15 pounds is what I estimated my weight gain will be over the next 3 weeks. I will be happy for the trip but very depressed when I get home and say the heck with this whole diet thing and stop counting calories and gain the 40 pounds back afterwards. I’m being very pessimistic here but I know me and that is something I’d do. Plus there is the added weight to the bag, my scale doesn’t weigh that much but it takes up a lot of space which means I either take less clothes or I take a bigger bag. We have almost a ½ mile walk to our hotel in San Francisco; do I really want an annoying bag to drag through the streets of San Francisco? Dilemma!!!

Option 2 ~ Take the scale
The other option is to pack the scale. This would require a bigger bag and one that is not as easy to maneuver around the streets. But it is only one city that would require me to walk around with it so is it really that much of a hassle? Having the scale with me won’t help me control my eating. I will probably still go willy-nilly but at least I’d be cognizant of how much I’m gaining and won’t be slammed with a huge weight gain at the end of the trip and get depressed and gain my 40 pounds back.

Decisions
I don’t know what to do. When I went to Branson with my Mom in November, I took the scale. I gained 4 pounds in the first 3 days and then leveled off. It don't make me eat any less or think about my eating and I was really only depressed the first couple days. Since that trip I haven't taken the scale with me but I was never away from home for more that 3 or 4 days. Can I handle 10 days with out? I don't know. :-(

Conversations had in DT Minneapolis
As I walked around the block of my building to get a little fresh air, a black man was walking towards me and said

So that was a little awkward but flattering I guess.

Also in DT Minneapolis…
So this week before our trip is a crazy one as I’ve mentioned in the last blog. You know lots of eating out and not being able to work out. Well that changed on Tuesday!  We had a Twins game on Tuesday and Eric was going to put in some OT. My work isn’t really busy right now and I didn’t want to sit around here for hours waiting for Eric so I decided to RUN! I had my shoes and socks because I wanted to change before the game but I didn’t have any other running gear. I remembered I could use my phone to track the run (I don’t like running with my phone but it will do in a pinch). And I went to Target and bought running pants, a sports bra (on sale!) and a t-shirt and I went for a run. It felt amazing! I did 4 miles and I felt like I could do 4 more. It was the most awesome feeling. I ran across the Stone Arch bridge (St. Anthony Falls were really going!) and ran down St. Anthony Main, over to Nicollet Island, across the Hennepin Ave. bridge and down the West River Road to Gold Medal Park and back. I never walked and only stopped at stoplights but avoided them at all possible (which is why my map has so many turns on it!). I was so happy the entire time. I think I have a new tradition on game days! :)

Here is the map. Something is wrong with the splits because my total time for mile 1 was 12:30 and the little women in my head even said it but Nike+ online says it was almost 14. My total time at mile two was about 25:30 but it says it was almost 27 minutes but somehow the last 2 miles were very fast and I finished the last mile with a 12 minute pace. Not possible because I was sitting at stoplights a lot. Overall pace was 13:01. 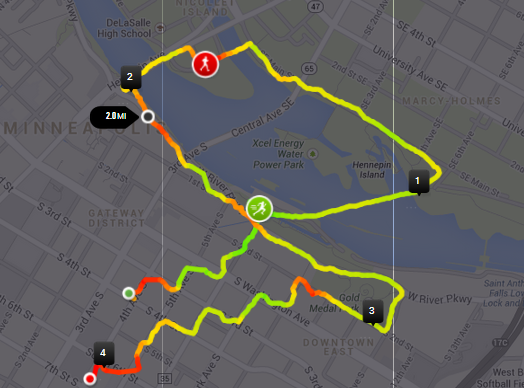 Posted by KimmerBee at 8:12 AM