Rafting the Rio Grande
We started out the morning with a drive to the Rio Grande River with Santa Fe Rafting. We piled into an old van and drove about an hour north of Santa Fe. You know there is always that one person that drives everybody crazy. Yep, we had her in our van. She wanted to stop to see Pueblo jewelry and I can’t remember what else she wanted. She was constantly asking questions. I’m all for ask questions but an hour of nonsense questions got very annoying. Eric and I just looked at each and rolled our eyes. She asked such random things like what is Allsups? (It is a local chain of gas stations in NM) and what does Allsups mean? Like our tour guides know or even care?  It is like somebody asking me what Kwik Trip stands for. LOL! About 15 minutes before we were supposed to arrive at the river we had to stop at some random machinery shop so she could use the bathroom because she couldn’t hold it anymore.  Seriously!?! So we finally get to the spot where we drop the raft in and thankfully Eric and I were paired with Tyler and Cynthia. They were from Austin, TX and he was a software engineer and she was a PT. We had Damian as our guide. Thank God as the other guide was not nearly as good.  And that annoying women was not in our raft. YAY!  We only went over a couple of Level 3 rapids. It wasn’t that exciting of rafting. It was not nearly as exciting as the one in Montana. But to their defense, the river is slower this time of year and it isn’t very high so there were times we got hung up. Overall it was a pleasant experience. Of course I don’t have pictures of the event and they want $20 for one digital pictures. Yeah…I don’t think so. We floated about 2 hours and had some snacks while the rafts were loaded back up and before long we were back in Santa Fe. The annoying women slept (and snored) the whole way home.
Scandia Peak Tramway
We didn’t waste any time getting out there and headed to Albuquerque. I didn’t have much time for ABQ and when our rafting day got switched (we were supposed to go on our anniversary) it really left us with no time. I did the number one thing to see in ABQ, the Scandia Tramway. It was a very expensive ride to the top of Scandia Peak. It was $25 each for 30 minute ride roundtrip. It was fun riding up to the top and seeing the area from 10,378 feet. Once we were up there it was freezing and there really wasn’t much to do so we walked around a bit and took the next tram down. Overall it was an interesting experience but I’m not sure it was worth $25. 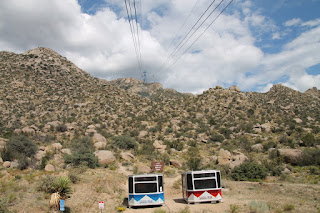 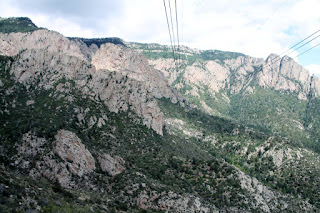 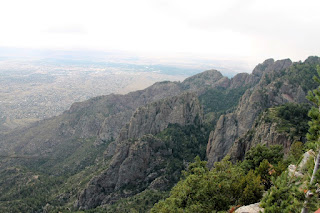 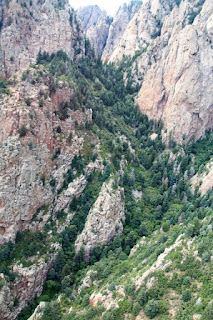 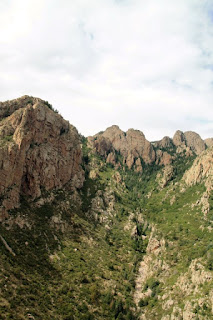 Albuquerque Isotopes
The main reason for this entire trip to the Southwest was to see an Isotopes game. So here is the back story, Eric loves The Simpsons and in the episode Hungry, Hungry Homer, Homer accidentally discovers evidence that the Springfield Isotopes are moving to Albuquerque. Homer stages a hunger strike in which he chains himself to a pole near Duff Stadium in order to force the owners of the team to admit they are moving to Albuquerque. Homer becomes thin and sickly, and he nearly gives in after seeing all the fans eating at the ballpark, but he gets visited by the spirit of Cesar Chavez (looking like Cesar Romero, since Homer doesn't know what Chavez looks like), telling Homer to not give up. Thinking Homer's gone crazy and his publicity is wearing thin, the team's owner unchains Homer and, in a public ceremony, offers him a free hot dog. Homer realizes the hot dog is topped with Southwestern ingredients (such as mesquite grilled onions, mango-lime salsa and jalapeño relish), proving the team really is moving to Albuquerque. The crowd then takes notice that the hot dogs are even wrapped with "Albuquerque Isotopes" paper and become enraged.
Ever since that episode aired and two years later the Isotopes actually came to ABQ, Eric has wanted to see a game. So here we are. I loved the stadium. Our seats were cheap and very close, the food was cheap and the entertainment was great. There were Simpsons stuff all around the stadium and they even had a donut shop. Homer loves donuts. I got a new Isotopes shirt and Eric got a hat we watched most of the game. All around it was a fun time. 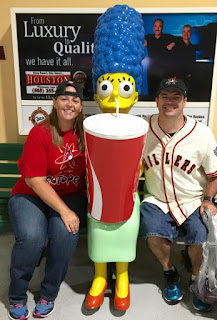 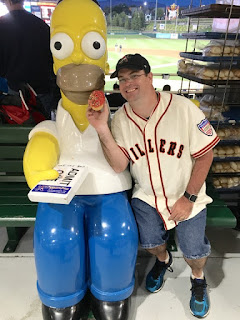 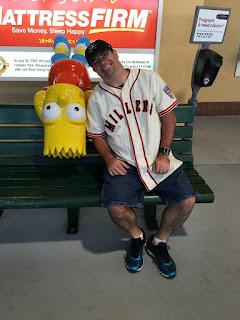 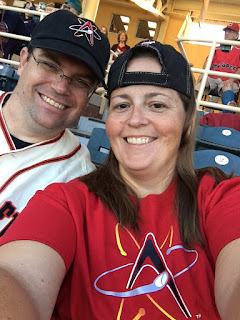 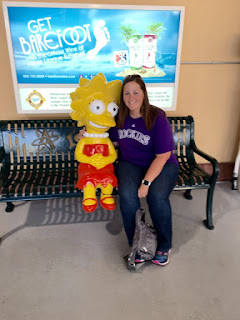 Day 5 miles driven: approximately 70 (excluding the miles in the van to/from rafting)
More pictures can be found here.
Posted by KimmerBee at 6:47 PM