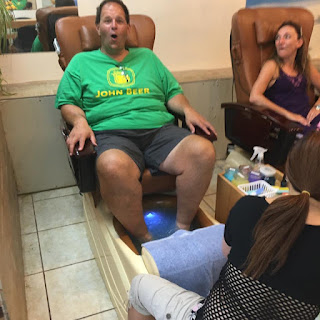 Wow, what a whirl of a weekend. There was lots of family, friends and food.  This post will focus on pre-reunion.

Wednesday morning I left with them for Wisconsin. Eric still had to work on Wednesday and half day on Thursday.  We stop in Rochester on our way to pick up some last minute items for the weekend and to have lunch at Newt’s with Linda’s parents. They took Alec for the night. We finally got to Arcadia and had pizza for dinner.

Thursday morning mom and I made a half recipe of monster cookies. So we only used 6 eggs instead of 12. LOL! When the cookies were done, Mom, Bev and I made a trip on the backroads to Whitehall and through Independence to check out the flooding. We got a lot of rain early Thursday and roads were flood and washed out everywhere. Places around Independence got 8-10 inches of rain in an hour or less.  Yikes! That massive amount of rain caused Elk Creek to swell and flood Hwy 93 between Independence and Eleva. We drove through Independence and noticed Bugle Lake was really high. We stopped by Anna’s to drop off some cookies and she said she was going to Whitehall
later and I said the road was open. We got home via more backroads and about an hour later Anna calls and says I lied to her! In that short period of time, the bridge in Independence was shut down because of flooding. It came so fast. The dam in town was eventually opened but the lake flooded across the street into those houses too. Crazy! Thankfully Eric went the Minnesota side to Arcadia. 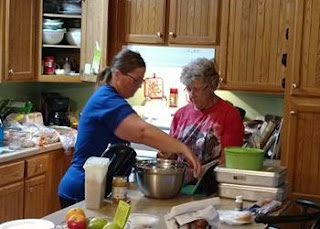 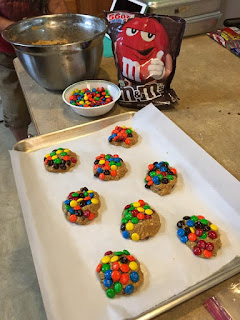 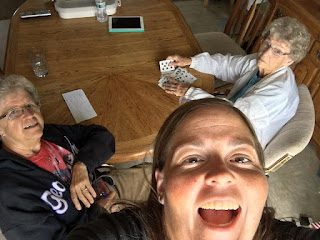 So the first event for Ashley for the Arts was the 5K run/walk. The race was small this year but it doesn’t surprise me as all the flooding around caused many roads to be closed. There were 145 I think. Mike and Linda were going to walk, Eric was trying to get in the top 25 and I just wanted to run well. Alec was running the 1 mile race…I should say he was registered for the one mile race. The course was very hill. The first 2 miles sucked and my time sucked too. I started out way too fast and paid for it early. Around 1.8 miles I ran into Alec. He missed the one mile turn and was walking. I came up to him and asked him why he was running the 5K. His response was WHAT?! Nobody told me to turn! I told him he had gone almost two miles already. I told him I’d finish with him. It meant walking to the finish but that was ok, my time sucked anyways. Of course, now he started complaining that his feet hurt. LOL! We sprinted to the finish had a time of 49:22. 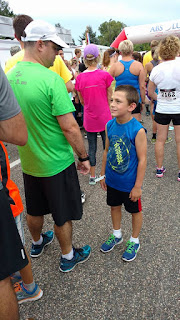 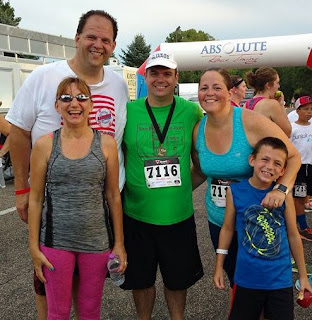 We got home the rest of the family was finally there. It was nice to meet Melissa finally (Dylan’s girlfriend).
Friday morning we had a nice breakfast with french toast and bacon. Dylan and Danielle ran to La Crosse to see their dad and Nancy went with them to visit her former employer. We got things ready for the reunion by washing the tables and chairs. Eric and I went for a little drive in the country to check out places that were flooded on Thursday. It was a fun trip. We got home in time to see The Memories at Ashley for the Arts. Thankfully it was in the Pavilion as it poured the entire time. there were so many people packed into the place.

After a great dinner, Eric and I went back to Ashley for the Arts for see Chicago. It was a great show. Even though it rained the entire time, it was fun. The first half hour wasn't great as it was their new songs that I'm not familiar with but the last hour was all the songs I know. It was awesome! 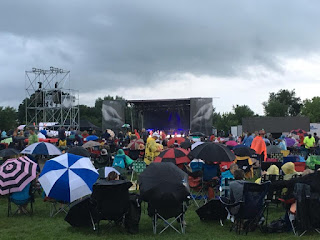 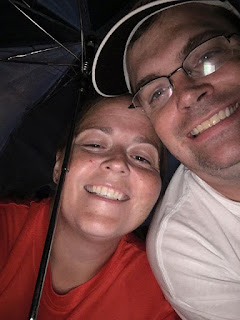 Posted by KimmerBee at 6:38 PM