Thunder Bay and the Sleeping Giant

This past weekend I went with my friends Mary Linda and Alice to Thunder Bay. It was a girls’ weekend up north. We left Friday after lunch and drove the long road up to Canada. We got to our hotel pretty late, especially since Thunder Bay is in Eastern Time…oops…forgot that. LOL!  We had a really late dinner at the hotel restaurant and then retired for the evening.

Kit Pick Up!
Since this is Canada, it is called a “kit” not a packet so we headed over to the Mall to get our kit for the race. Mary Linda missed signing up online and tried to register in person but they only accepted cash…Canadian cash! So she wasn’t going to do it. One of the race volunteers, Tom, came up to us and we talked a while about the race, Thunder Bay, the states, Costco among other things and eventually Mary Linda took out some money and registered. I also took out some money for a long sleeve running shirt. When I went to pay, the girl said we except cards…Doh!  I didn’t have to take out money, I could have just used my card. LOL! We eventually got out of there and headed to the Harley dealer so Alice could stock up on Thunder Bay Harley gear.

Bum Numbing Road
Finally we made our way to the Sleeping Giant. It is a bit of a drive from Thunder Bay but worth it. The first thing we did was drive the 9km gravel road to the Thunder Bay Lookout...it reminded me of the road we took to the glacier in Iceland. Except this time I was driving! It was pretty scary drive out to the point: 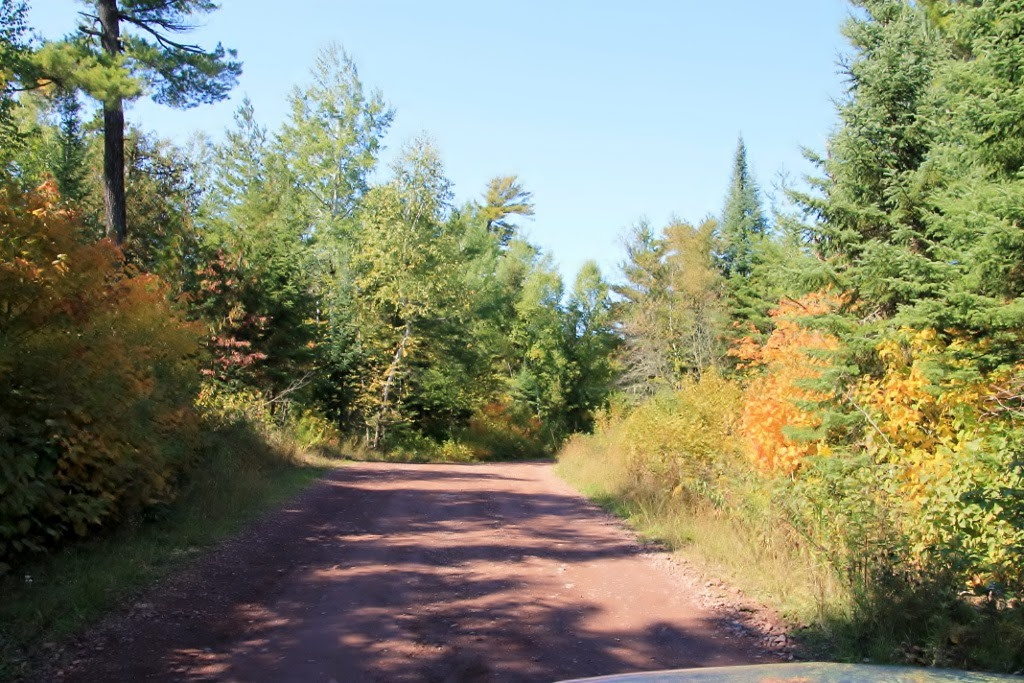 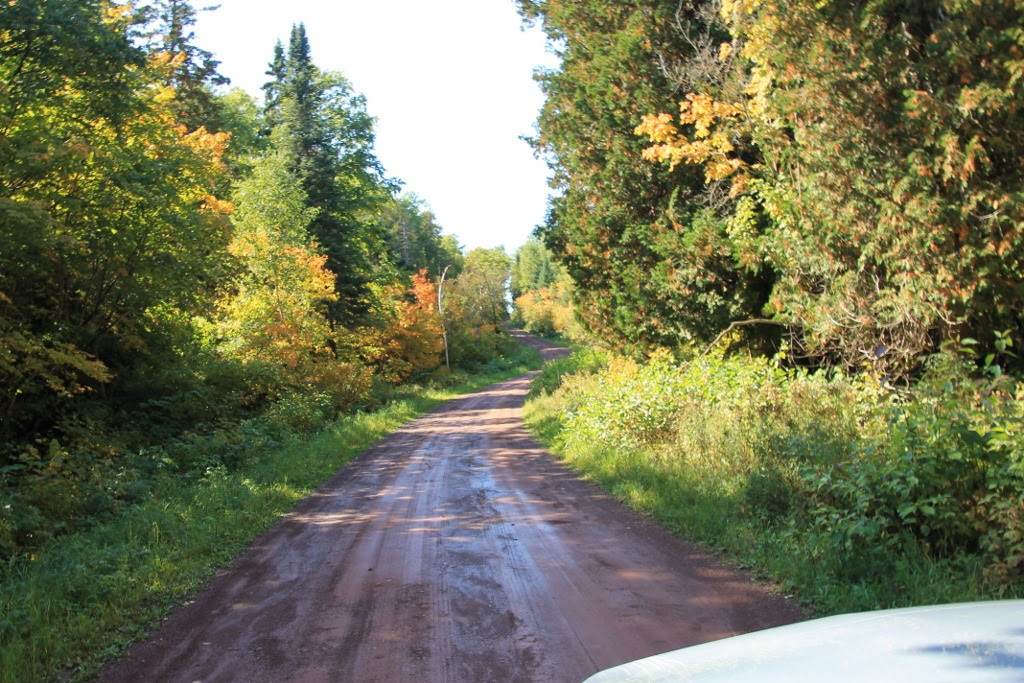 but the view was worth it: 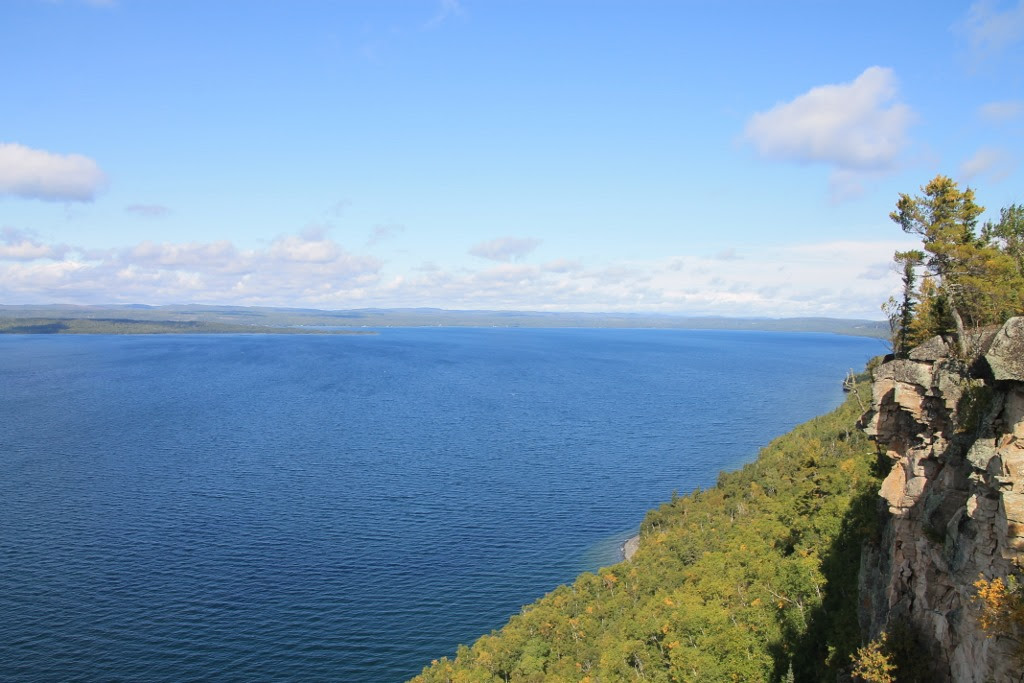 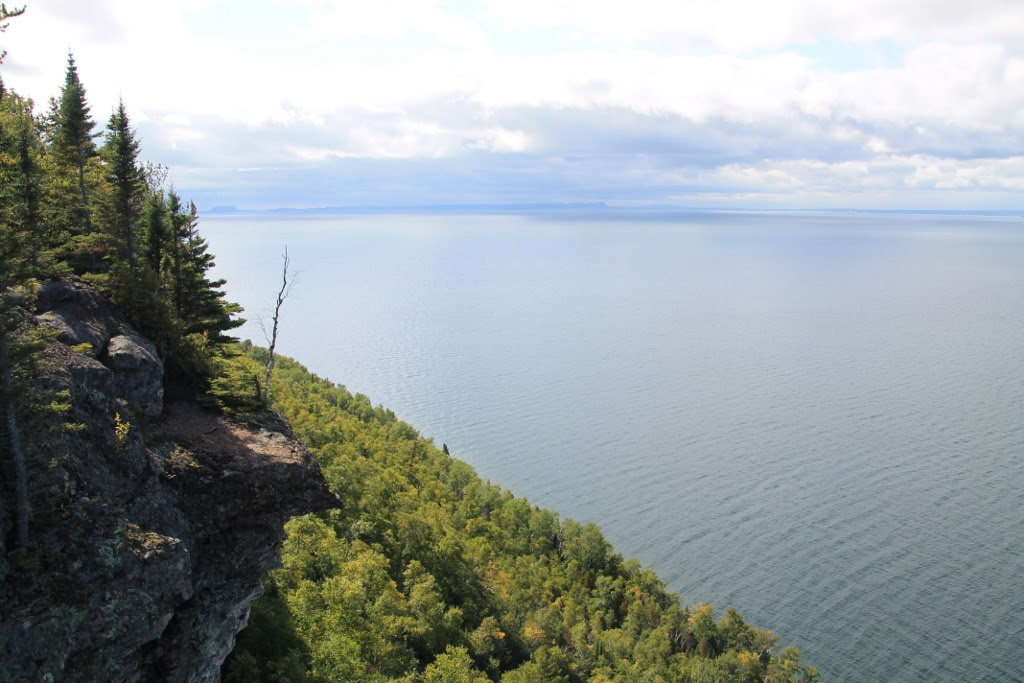 The drive back didn’t seem as horrible. Maybe I was used to the road by then. Who knows!? 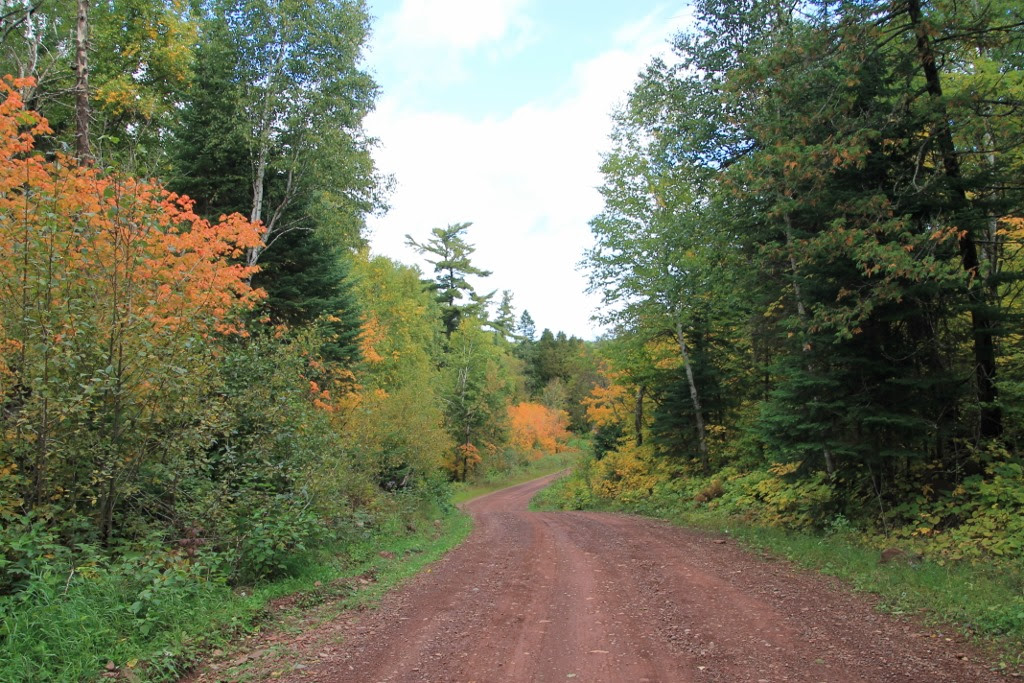 Sea Lion
The next stop, after a detour to Silver Islet at the end of the peninsula, we made our way to the Sea Lion. It wasn’t quite a mile hike to the point, it was fun with some challenges. We got some great pictures of the arch. So the name Sea Lion refers to a lion in the sea not the sea lion animal…I was confused. The arch used to have a lion’s head and looked like a lion but it fell off in the early 1900s. So now it looks like this: 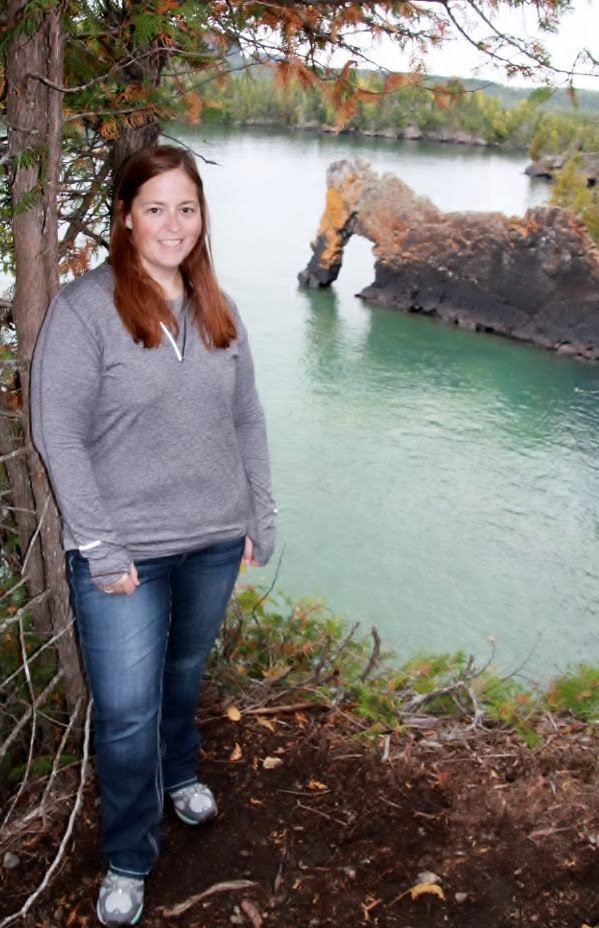 We did some more hiking around the beach area before heading back to Thunder Bay. 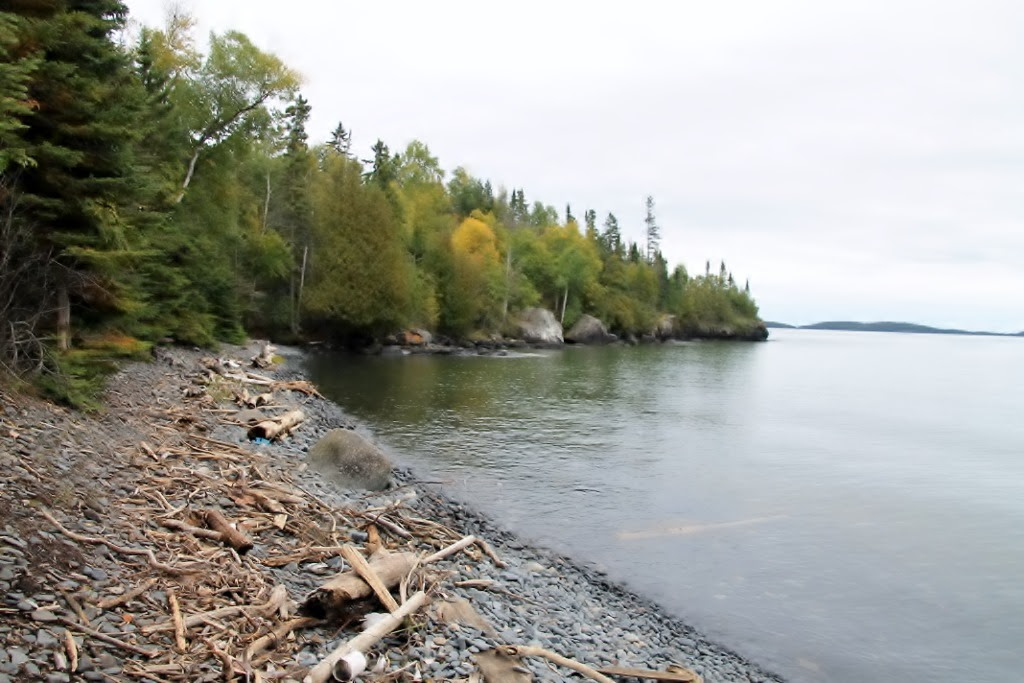 Swiss Chalet
If you ever visit Canada, eat at Swiss Chalet. Their chicken is the best. Eric and I ate at one in Sault Ste. Marie, Canada many years ago on our Great Lakes Road Trip. It was so delicious, we think about it every so often and wished there was one here. Anyways, I was so excited that Thunder Bay has since got one (it was new in 2012).  We had to go there, I had to show Mary Linda and Alice what good chicken taste like. It didn’t disappoint!

Sunday
We started off the morning packing up the room and heading to Starbucks for our pre-race drink. Next we headed to the Thunder Bay Marathon area…my report on that race will be in a separate post…The race went well. Mary Linda beat me by 28 seconds. My time was pretty good considering I’m still recovering from Bronchitis!

After the race we did a little shopping at the mall before heading south. We stopped for a late lunch in Grand Marais, MN. A very good little restaurant called A Piece of Pie Café. We eventually made our way to Alice’s house. Here is Duluth: 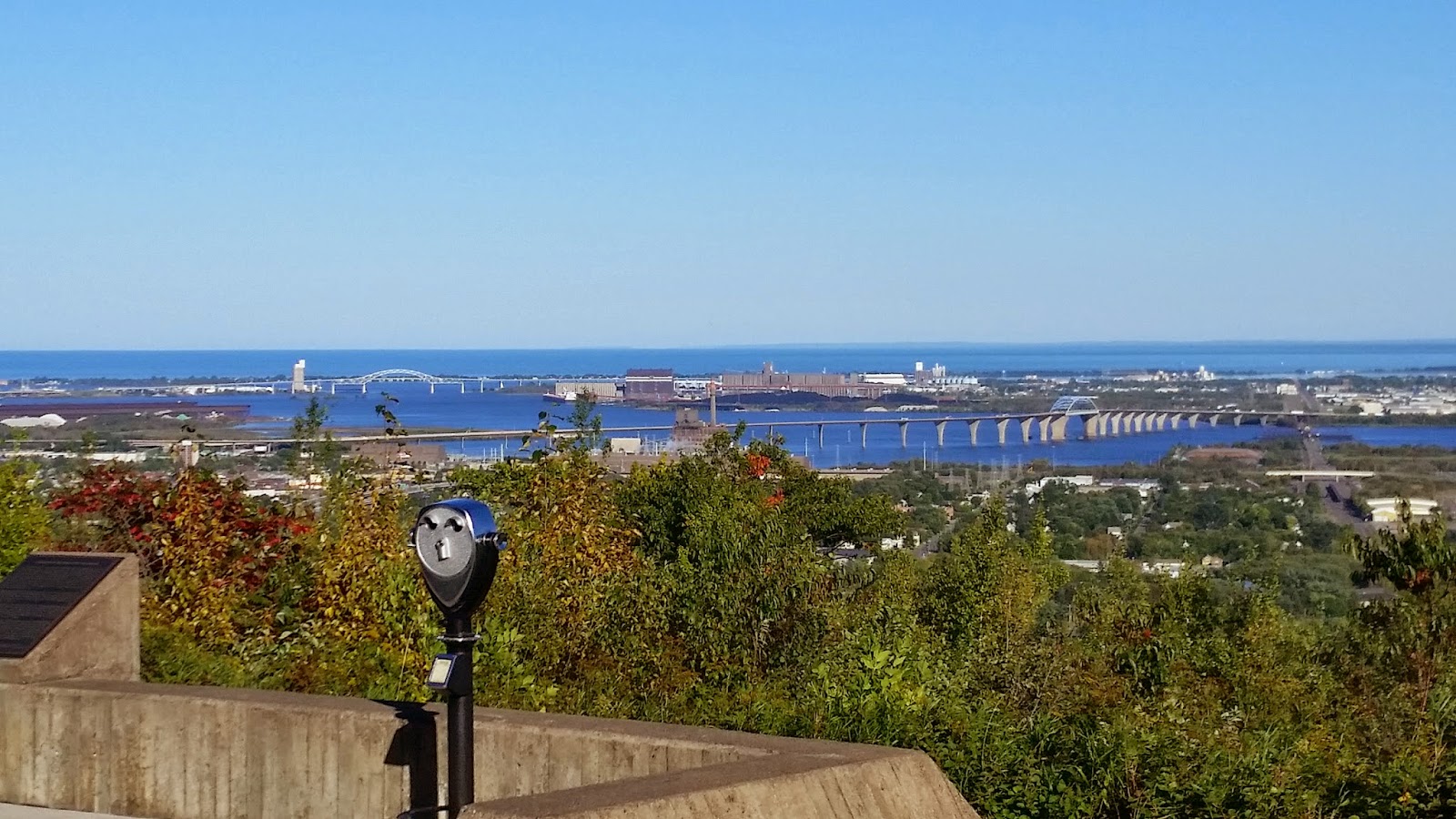 It was a great, fun-filled weekend.
Posted by KimmerBee at 8:30 AM