It was a very busy weekend considering we don’t go anywhere far away.

Thursday we went for a bike ride up the hills to Mystic Lake Casino sign. I’m trying to prepare myself for the hills of my bike ride this Saturday at the tri…yikes! After a bike ride and pancakes for dinner we went to watch the Canterbury Park fireworks show. Man, people turn out for that show. Every street, parking lot and field was full of cars waiting for the action! It was a good show but not fantastic. 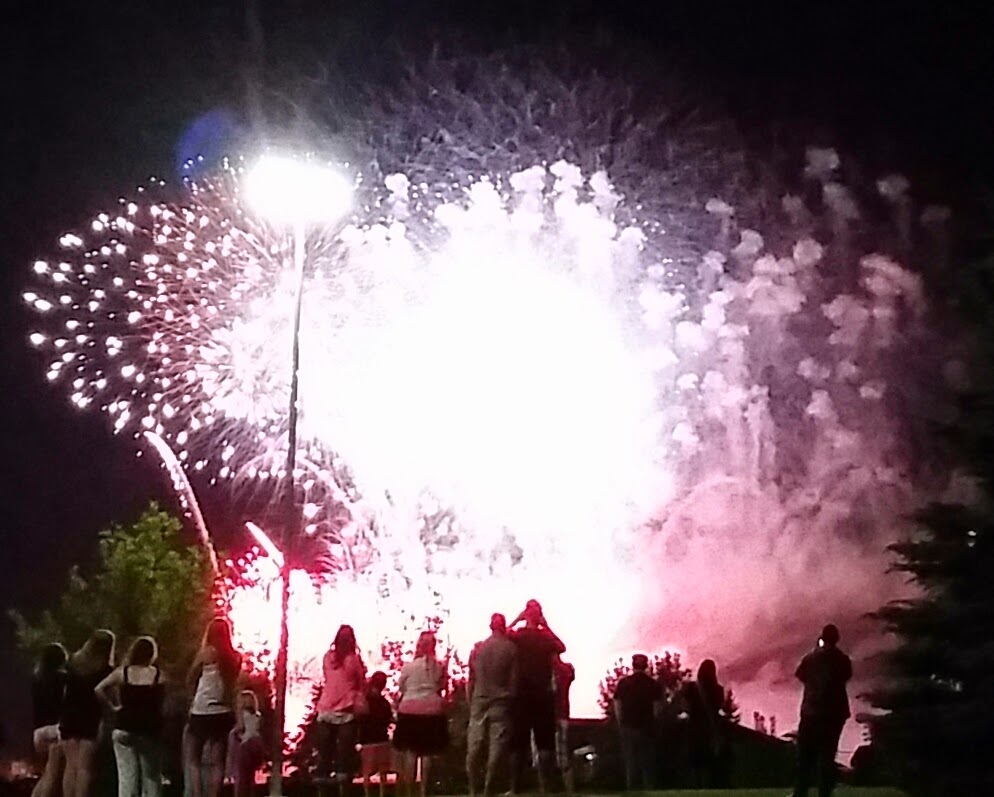 Happy 4th of July!
Friday I started the morning with a quick 2 mile run so I could get my Uncle Sam Badge on Nike+. Silly I know!

After that we got an early start on our Twins game vs the Yankees. They were giving away a Lou Gehrig Bobble Head to honor the 75th Anniversary of his famous speech. 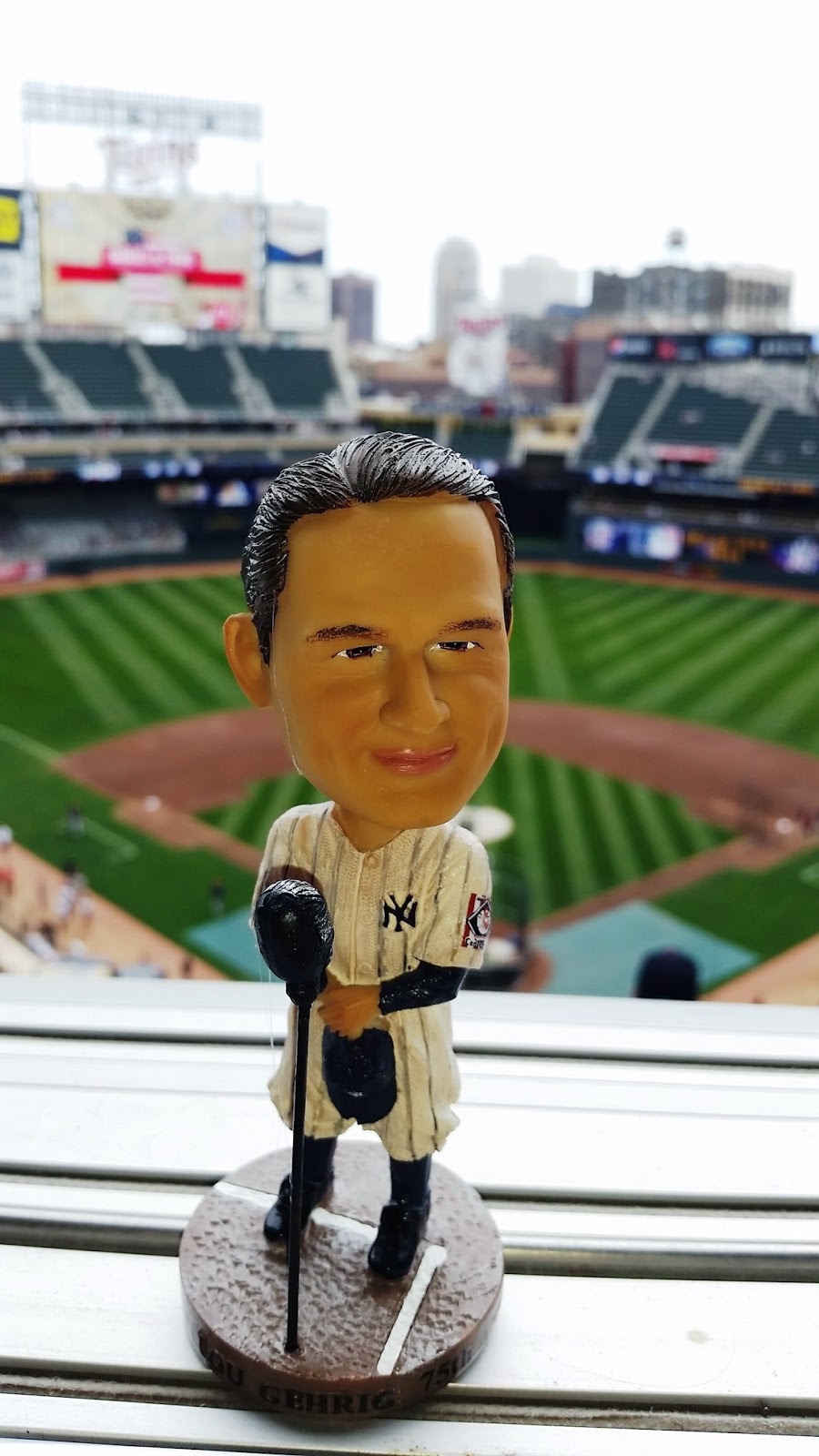 The Twins lost of course. We left after the 7th inning stretch because I had my annual 4th of July concert at Round Lake Park in Eden Prairie. Like last year we stayed for fireworks. Way better than Canterbury Park’s fireworks. I don’t really like fireworks but these were amazing.

Soften Butter
So Saturday morning, after grocery shopping, I decided to make some cookies. I pulled the butter out of the fridge it was already soften…huh? Yep our fridge went out…great more money going out the door. So I filled a cooler with ice and put all the important food in the coolers with ice. I left the waters and pops in the fridge. I called the Home Service Plus people to set up an appointment for Sunday…an all day appointment. I guess that means my Sunday is shot!

I also discovered that our garbage disposal leaks so for now I have a bucket under the sink. It only leaks when I run it. Thankfully it doesn’t leak when I’m just running water. ARGH!

Very Hilly Ride
After the frustration of the fridge, I went for a bike ride. I have to train on hills! Now I should have been training for a while now but I don’t do that. I purposely went on all the hills I could find. I thought I was going to die on some of them. I even thought to myself at one point, what the F*** have I gotten myself into?? But going downhill made it all worthwhile. I got up to almost 32 mph on my bike and it was fun again!  My overall pace was 13 mph. I’m very happy with that. I’d like to get up to an average pace of 15-18 but I’ll take 13, especially with the hills I had to climbed.

Mini Golf
Around 3pm Eric shut the TV off and grabbed the keys and said lets go. It is very strange for him to shut the TV off so I was confused. We drove for a bit and eventually we went mini golfing. Yay! It was fun.  We got home and I showered and we went to 7pm Mass at Marystown…the tiny country church about 7 miles outside of Shakopee. It is a very cute church and the priest this week was old Father Stolzman. Our old priest! I love him. Best part is we were out in 50 minutes. I think we will go there again.

Wasted Day
The tech guy came around 10 and said we needed to defrost our freezer…they could have told that on the phone I thought. Great we get to waste the whole day at home while our freezer thaws. It also meant that we need more coolers and ice. So I went to Walmart and got some cheap Styrofoam coolers and some ice and packed all our frozen food for the long day out of the freezer. It was so frustrating. We were basically kept hostage at our house all day! I went for a run in the hottest part of the day just because I was so frustrated. It was hot man and it was a brutal 3.5 miles. But I did it…and got sunburned. :( But I was happy to see one of my day lilies bloomed.
Finally the tech came by and after a quick look he said a part that manages the automatic defrost went bad and was stuck in defrost. Weird! He had to order it and we have to call back for the repair. Great!  But he managed to get our fridge working again so until the part comes we can at least use our fridge/freezer. We just have to defrost it again when they come. Whew! That was about 4pm.

Valleyfair and Frisbee Golf
After all that fiasco, we decided to go to the waterpark at Valleyfair and cool down. It was so nice to go swimming! They have really changed a lot at Valleyfair this winter. They moved the Tilt-A-Whirl and Scrambler, added two new rides and took out a couple and the biggest change is the iMax theater is gone!

We finished off the evening with a round of Frisbee Golf. It was very comfortable at 8pm last night so it was a fun way to finish off the weekend.