Survival of the Unfittest


Well, well, well.  Yesterday was the One Last Tri triathlon in White Bear Lake.  It was a very early morning as it is almost an hour away from home.  We got there with time to spare.  We ditched the bike in the transition area and walked around the lake. The water was freezing and the outside temp was around 60 degrees. I really feel for Carrie. She didn’t have a wetsuit. She wasn’t the only one but she was definitely in the minority.  They started the long course swimmers first and then the short course.  I had to hurry back to the bike area to get ready for the ride.  By the time I got back to the transition area, some of the long course participants were already on the bike.  That is crazy fast!  Carrie came in just over 13 minutes and we exchanged the timing clip and off I went on my ride. 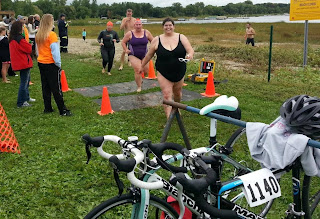 I was really nervous that I wouldn’t finish or I’d be really slow.  It started out sort of flat but the first hill was a beast.  And it really was hilly and the first 9 miles was mostly up.

It really sucked and I wasn’t prepared.  I was cursing myself for not training more during that first 9 miles. The road was not the best but that is no excuse.  I only passed two people…one was fixing something on the bike and the other was changing a flat.  I was passed by a bunch of people.  When the long course bikers caught up to me at my mile marker 8 (their mile 24) it was a bit discouraging.  Oh and the 68 year old guy that passed me too.  I was on my bike just over an hour.  I got back to dismount area and ran into the transition area on wobbly legs. I gave Eric the timing chip and he was off on his run.  Carrie took some pictures of me with my bike, the missed getting me on it. 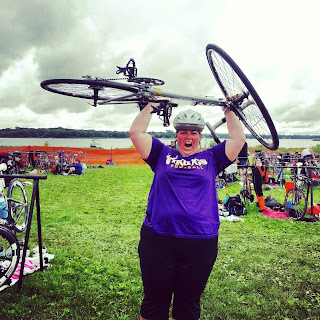 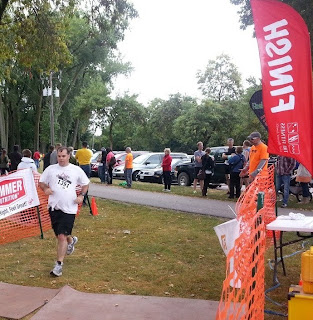 He was saying he wasn’t going to make it and he would be dragging his ass over the finish line.  He is such a liar!  So here is our picture after we finished.  We survived!  Our times weren’t the fastest but we did it and we weren’t last! :)  Our overall time was 1:52…I’d like it noted that I did most of the 1:52! LOL!
After the race we headed to Caribou Coffee for some warm drinks…I was so cold!

We got home and left right away for Mankato for a picnic with DJ and kids.  We stopped at Emma Krumbees for raspberry picking.  Overall it was a good day…I’m a little sore now.
Posted by KimmerBee at 11:08 AM