We started the long road home on Friday.  We stopped in Montgomery, AL to see the capitol building.  I pointed out to Eric all the important places from my last unfortunate trip to Montgomery.  It was really emotional for me to go back there after the dump truck incident in 2011.  The capitol is very lovely.  We also so the First White House of the Confederacy.  I think the town has some charm to it.  Here is the two buildings: 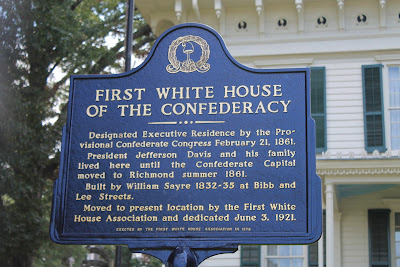 After Montgomery we continued north to Birmingham (which also looks like a cute city) and eventually made our way to Nashville, TN.  Again we drove through the downtown area to see the capitol building, again very nice building.  Downtown Nashville is very charming too. I definitely want to come back here some day and show Eric around.  I was in Nashville when I was younger.  I remember it very vividly.  I won 2 life sized penguin stuffed animals on the milk can toss.  There is a pictures somewhere with me smiling with my two huge penguins and dad in the background with the trunk of the car open and he has his hand on his chin trying to figure out where he was going to put them. LOL!  Memories!  Here is a picture of Tennessee capitol:
We drove through Kentucky and made our way to Mount Vernon, IL, a small town with 3 or 4 major interstates intersecting there.  Needless to say there are tons of hotels, gas stations and restaurants off one exit.  It is kind of a crazy place.

Saturday morning we started our last leg of the journey home.  We drove through St. Louis which is a construction nightmare.  I thought the Twin Cities were bad but St. Louis far worse.  Three interstates cross the Mississippi on one bridge and they reduced that bridge to one lane.  Yikes!  Thankfully I had us go around it through downtown St. Louis.  The rest of the journey home was uneventful…except when we ran into the Iowa Hawkeye fans leaving their game.  I never thought I’d run in to traffic in the middle of nowhere in Iowa!

We got home around 8pm. Swirl was very pissed at us.  He wouldn’t come out from under the bed.  And when he did finally make an appearance he meowed and meowed….”how dare you leave me for 10 days, you are going to pay”…is probably what he was saying.  He of course peed next to litter box.  Such a spiteful cat!  He warmed up by Sunday morning and was constantly at our side.  He doesn’t hold a grudge nearly as long as he did in his younger years…he is, after all, a senior citizen!

We spent all day yesterday relaxing. We went out to fill gas and get a car wash. The love bugs are still on there.  Stupid flies!  We also made a quick trip to the apple farm for some apples. Yum!

It was a good trip but I’m glad to be home.
Posted by KimmerBee at 1:54 PM