So the 2014 MLB baseball schedule was released yesterday at 1pm.  And the planning started at 1:01pm.  It seems crazy to be excited about 2014 but let’s face it the Twins suck this year so interest is waning but hey next year is a new year and they will be better…right?  I hope!  So the schedule has the usually suspects but the thing that interests me the most is the interleague games.  These games happen very rarely and there is a 50/50 chance the games will be played at their ball park.  That means road trip!  So this year was DC and the two Texas stadiums (the two Texas games were not interleague.) 2014 is the year we play the NL West.  I have not been to a baseball stadium out west…the closest I came was Arlington, TX and that is barely over the Mississippi River. Ok so it is 369 miles away but you get what I mean, right? LOL!

I thought wouldn’t it be nice if the Twins could play back-to-back series in LA or SF/Oakland.  But of course the schedule wasn’t that nice to us. Here are my complaints:
So my travel brain started thinking.  I really don’t care if I see the Twins play the games or not at the stadiums...I really want to see the stadiums. It would be nice but not required. So in May when we are in Colorado we will go see the Rockies play the Padres.  And if Cuddyer is still with the Rockies, I can wear my Twins shirt of his.  So we can check that stadium off the list.  Now after the graduation is when the Twins play two games in San Diego and 3 games in San Francisco.  I thought might as well check out this crazy multi-city flight.  “The Minneapolis-Denver-San Diego-San Francisco-Minneapolis flight.”  I was thinking this was going to be ridiculously high. I mean round trip flight from here to San Fran is over $500 alone.  Well nope, $583….did my eyes deceive me?  Nope $583. Well that really got me going.  But I thought to myself, we have 2 days to get to San Fran from San Diego. We’ve done San Diego so many times; there really isn’t anything left that we HAVE to see.   So I checked out renting a car in San Diego and driving to San Francisco. I have seen pictures of the drive on the Hwy 1 in California and all I can say is yes, Yes, YES! So this is my tentative plan…hopefully this will work out for us.

4 Ballparks in 11 days!  If you want a map, I created this cute little map of our plan.  See the little baseballs, planes, the car and the graduation hat? I feel so clever. 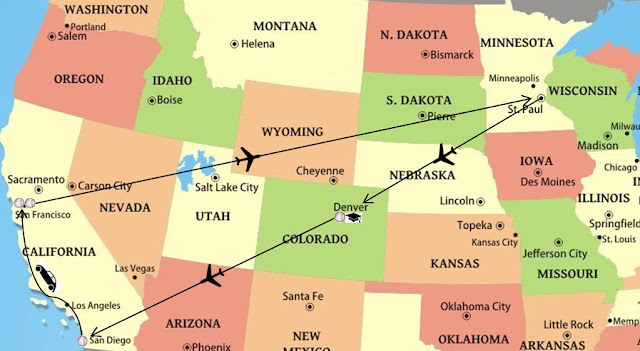