Now you are probably thinking to yourself, especially if you read my blog, you were training for a marathon?

Yep, fooled you. Only a handful of people knew I was training for the whole kit and caboodle! There was an Onion article last year that said, “Wife Trained for Marathon and Didn’t Tell Anybody.” Of course the Onion is a satire news which means it isn’t true, just fun. Seriously, most people training for a marathon will tell everybody. I did not. I didn’t tell too many people because 1) I didn’t know if I could do it and 2) I didn’t want some people worried about me (I’m looking at you, Mom!).

It was a very long winter and many of my long training runs were on the treadmill. I’m talking 15, 16 mile runs on a treadmill. I literally lived at the Community Center on Saturday or Sunday mornings and watch 2-3 movies while running. It was a struggle, the treadmill sucks. But I persevered and have a shiny LARGE medal to prove it.

We ran the Little Rock Marathon. You are probably thinking, why the heck would you got Little Rock. I can understand that, who goes to Little Rock?  Well this marathon is known for a few things, one being very LARGE medals and two, a very walker friendly 8 hour time limit. And it isn’t like a lot of other marathons where they have a long time limit but you are all alone. This is not the case. They have pacers all the way to 8 hours which is unheard of. Normally you would get a 5:30 pace, maybe a 6:00 if you are lucky. This race was great.

Little Rock is very hilly. The first half wasn’t so bad but the second half was awful. A long 2.5 mile climb during miles 14-16 and the big climbs during mile 25. Both were brutal.

The first half the race I ran mostly a 2:00 run/0:30 walk. A lot of times I would run longer than 2 minutes but I was fairly consistent. Eric stayed with me the whole while and we didn’t argue. AMAZING!

The first half of the race we ran past Clinton’s Presidential Library, Governor’s Mansion, Central High School (think late 1950’s desegregation conflict) and the Capitol building. My half marathon time was almost a PR at 3:02. I was feeling great the first half even though it rained the entire time. Yep, I was soaked!

The second half was interesting. Like I said we had the big hill during miles 14-16. We did a lot of walking. But I was still feeling awesome. Once we got to the top of the big climb, Eric seized up. Like literally, his calf muscles on both legs seized up, he was done running. It was unfortunate as we had some really nice long downhills coming up. He made a quick potty stop at mile 16 and we proceeded to walk.

I ran down the hills and walked slower than usually so Eric could keep up. The 6:15 pacers past us and I thought about tagging along with them but I told Eric I would stay with him to make sure he finishes. Funny thing, Eric was going to stay with me to make sure I finish my first ever marathon, but it was me, doing that for him!

During another long downhill I was running with the 6:30 pacers. The guy tried to convince me to leave Eric and join their pace group. He said I should ditch my hubby. But I said no, I’ll stay by my man. Aren’t I sweet?  During this time I also ran into Tabatha (Tabaliscious). She was doing her first with her fiancé. She was from Fort Worth, TX  and very nice. We talked quite a bit. Her fiancé stayed with her to the very end. He also went to a bakery during the race to buy her a warm peanut butter cookie. LOL! We ran into them quite a bit during the last 10 miles and I actually finished just before them.

Once we were done with the hills, we went on a long out and back through a park. Normally I don’t like out-and-backs but this was fun seeing all the fast people running to the finish. It also gave me an idea for water/food stops on the way back too. I would run for a few minutes and then walk so Eric could catch up. It is funny how many people commented that I was way too smiley and happy to be running a marathon. LOL! I was having a great time. I think it helps that I was supporting Eric and not the other way around. Eric told me to leave him when we got to the 20.5 mile turn around spot and I answer, “Why, I’m doing two of my favorite things, walking and social media.”

Oh did I mention that I was texting people and on Facebook, Snapchat and Twitter for a lot of the last 10 miles?  Haha!

I really didn’t have too much pain the entire time. Like I said, it rained the first half so my feet were wet and during mile 25 I felt my blisters. Boy they suck! During the long uphill during mile 25, my feet were burning. Once we reached the top of the hill, we finally got into downtown Little Rock and close to the finish line.  Eric told me again to leave him and I said my feet were burning too much. The last mile had the “couch potato ladies” who were handing out beads and about a quarter mile from the finish was the lipstick mile where I put on some lipstick for my finish line photos.

I sprinted to the finish and I felt great. I mean I was still able to pull off a pace of 10:00 mile!  I think the few people at the finish line were amazed that I was running that fast because I mean, seriously, we did a 7 hour marathon. Most people doing a 7 hour marathon aren’t running much…

During mile 21 or so I told Eric I wanted to do this again. And I do! I want to see what my true marathon time would be without the 10 mile walk. I can’t believe I’m saying this! 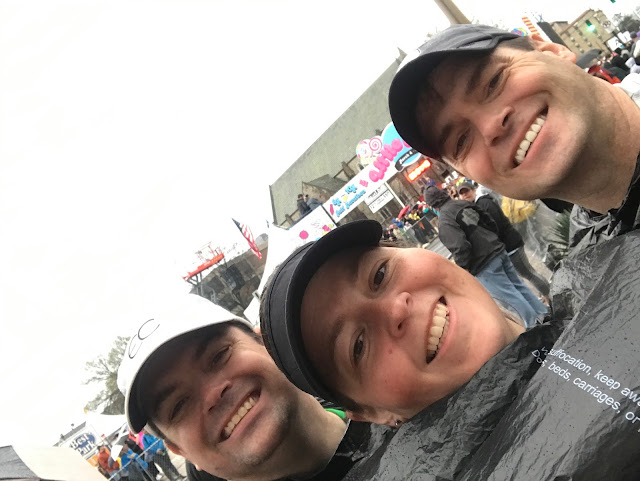 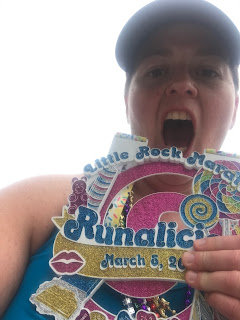 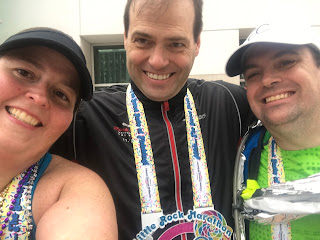 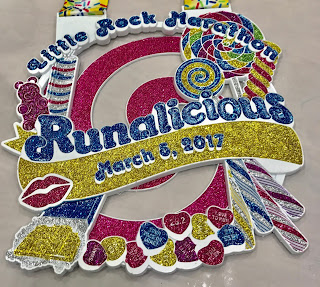 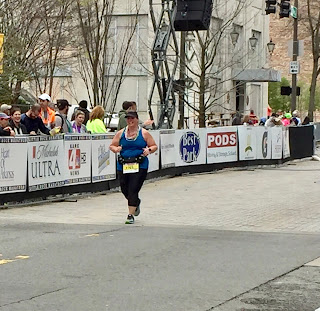 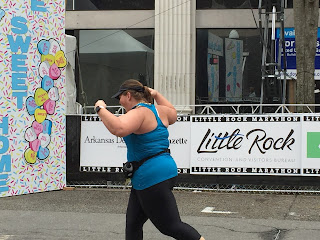 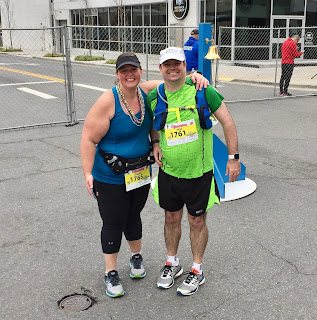 Posted by KimmerBee at 6:17 PM