I ran to Arcadia! (My 8 Mile Journey)

Saturday was a big day for me. Eric and I drove down to Sakatah State Park to go running on the trail. We did 8 miles. Yes I said 8 miles! It is a major thing for me. I have a 15K coming up in 3 weeks and to be honest I’ve been very scared of it. 9.3 miles is a long way to go. I’ve done a couple 7 mile runs before but they were all very hard. I thought to myself after the last 7 mile run, “How the heck am I going to do 2.34 more miles?” Now I can say I’ve done 8 miles and only have to worry about 1.34 miles. I can walk that…

Left in the woods…
The run was hard. I was bitter and ornery for the first 2 miles. Eric even made a comment about it. Eric is a saint for putting up with me. I eventually got my mind in the right spot. It helps when you think that if I keep treating him this way, he will sprint to the car and leave me there I the middle of the woods with no cell phone and no money. Not that he would actually do that but the threat is real, he had the car keys and can run faster than me!

Mile 3 was a breeze!
I had planned to turn around at the 2.5 mile mark but I didn’t look at my watch (Eric told me to stop looking at it) and before too long we were at 3 miles. I have to say mile 3 went by pretty fast. After we turned around, I drank some water and munched on a few tootsie rolls. I’m trying to figure out what will work to fuel me on the long distance runs. I hate the Gu stuff they try pushing so I’m looking for an alternative that doesn’t make me want to puke. Animal crackers worked but they make my mouth dry so my water was gone before the end of the run. Salted nut rolls work too but again I drink a lot of water with them. I’m not sure about tootsie rolls. They taste good and are easy to carry but they sticky on the teeth and require water, but not nearly as much as the other two options. So my quest for long run fuel continues.

Eric said what?
At mile 4, Eric actually said let’s walk for a bit. I know shocking…Eric said “walk.” This coming from somebody who used to say that walking was bad (and that is why he didn’t finish the TC Marathon many moons ago because Felicia made him walk.)  We walked a short bit, had another tootsie roll and then continued running. We meet some girls who were also running 8 miles. They were doing the Galoway, run-walk method.

I didn’t quit!
Around mile 6 we walked again for a bit and drank water and ate tootsie rolls. Even though my back was killing me, and we were close to the car, I pressed on. I didn’t quit like I could have. I gave Eric the water belt to take the weight off my back. Part of my problem with longer runs is I need water and I have to carry it with me. I felt much better when I got the weigh off my back. We ran to mile 7 (it was faster than mile 6!). My toes were tingly, numb and burning all at the same time during the entire mile 7. I’m not sure but I think my nerves in my toes were mad at me. I loosened the laces on my shoes and my toes stopped hurting. We turned around and headed down the home stretch. I walked a lot of the last mile but I still ran more than walked so that is good. Eric ran all of the last mile…he is so awesome. But I did it. I ran 8 miles!

To put that into prospective (for me), that is like running from my parent’s house in Independence to Arcadia. Or Mankato to DJ’s house in Rapidan or Rapid City to Blackhawk. For me that is amazing. For others that is nothing. But I don’t care about the others! I only care about me. Yes, I’m selfish!

In other news…
I’ve been a little lax on the blog lately. I haven’t really had much to say. I know shocking!

Last week was pretty boring. I think the most exciting thing was not having band on Thursday. It was cancelled last minute so Eric and I pigged out at Boston Market. And did I run on my night off?? Nope!

Let see, I went swimming on Wednesday. It had been a while. But of course when I get excited to swim again, the pool is closed down this week for Spring/Easter break. Darn it! Hopefully I will still be excited next week when it is open again. The only bad thing is it moves to the other pool in town. I like the East Jr. High pool better. Even though it is older and smaller, I just like it better. I think part of the problem with the West Jr. High pool is they always have swim team practice at the same time and I have to deal with that.

Friday after work we went to the KC fish fry with Greg and Celeste. It was delicious of course but a bit spendy, $12 each!?! It was cheaper to pig out at Boston Market!

Maps and Splits
This is my first shot at this distance and my time is slow but I’ll get faster! 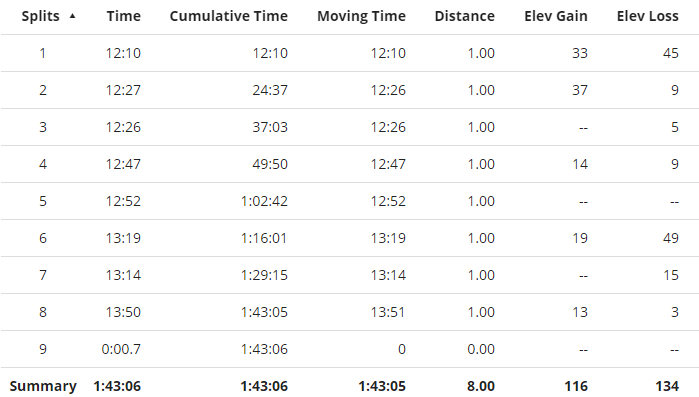 Posted by KimmerBee at 2:30 AM