The Run :)
Me and about 12,000 of my closest friends ran the  ♣ Get Lucky 7K ♣ on Saturday. It was crazy how many people were there. It was a sea of green. I even wore shamrock socks...see below! :) The weather was much better than the last run where it was below zero. It was a balmy 20 degrees with a cold breezy. I would say the waiting for the start was pretty miserable, not as miserable as the Polar Dash but it was cold. Thankfully the sun was out so it wasn’t too bad if you were standing in it but the shade was cold. They started us in waves and by the time we crossed the start line it was already 38 minutes into the race…that means that several people had crossed the finish line before we even started!

I’m not sure what wave we were as we just jumped into the mass crowd of people and went with it. It must have been the 10-11 minute milers because I was really booking it at the start. My pace for the first mile was 11:39 and it was much faster in the beginning. My pace was below 11:00 for the first 1/3 of a mile. I slowed down a bit once the massive crowd dissipated. Eric was there pushing me the whole way.

The second mile wasn’t bad coming in at 12:16. That mile included a large stretch of the horribly uneven cobblestone street of Main St. in St. Anthony and a little hill. I didn’t walk it like usual!

Mile 3 was a bit slower as I slowed down to get some water (which was frozen!) but I still managed to keep my pace under 13. Right when we hit the 5K mark (my time was 37:30 over 2 minutes faster than the last race!) we hit a major hill and my IT band was inflamed.

I walked up the hill and gave my leg a rest. Once at the crest I started running again but really I only lost 24 seconds on that last mile which means after the hill, I was booking it again, my pace for the last quarter of a mile was faster under 11. I was still under 13:30 for that mile. Overall I was very happy with my performance. My chip time was 54:03. My watch says closer to 54:25 but I’ll take it! :)  Overall pace was 12:26 which is the fastest I’ve ever had on an outside run (a long time ago I did 12:24 on a short 2 mile run inside on the track). I sustained that pace for over 4 miles which is amazing for me. I call that progress! See my splits and pictures...

The Celebration!
After the race we hit up the food, I was starving. I devoured a banana in like 10 seconds along with a mini salted nut roll. I didn’t realize I liked those. And on our walk back to the car I finished off a small bag of chips. Now I don’t normally eat chips but for some reason they were just delicious! As usually we celebrated at Caribou Coffee with a nice hot chocolate. I’m not sure what we are going to do for summer races. If it is 80 degrees do we want hot beverages???  I guess we will have to see.
The Chaos
We got home around noon and just relaxed on the couch. I made Eric and DJ get me Culvers while I showered and prepared for the next event for the day…the Eden Prairie District Band Festival. I’ve mentions this every year but it is 7 bands from grades 5-12 and the Community Band on the gym floor playing music, sometimes together. It is mass chaos. The bleachers on both sides of the gym are packed with parents, grandparents, siblings, etc. There is literally thousands of people pack into the gym. As horrible as that sounds, it is really quite fun.  I picked up my friend Jenny since the parking situation at the high school is a nightmare and carpooling is highly suggested. After participating in this event for 8 years I’ve learned a few things and one of them is to park on the last row, far end. The first year I did this event it took me 45 minutes to get out of the parking lot.  This year, 5 minutes!  Wisdom of the ages. Jenny and I stopped at DQ on our way back to her house and I eventually made my way home and did nothing the rest of the night.

The Green Cake
Yesterday morning I was up early, I hate that. I decided to make Abbie a cake for her birthday. Since her birthday is really today, St. Patty’s Day. I made her a green cake and with chocolate frosting and a green clover leaf. I’m quite proud of my cake. 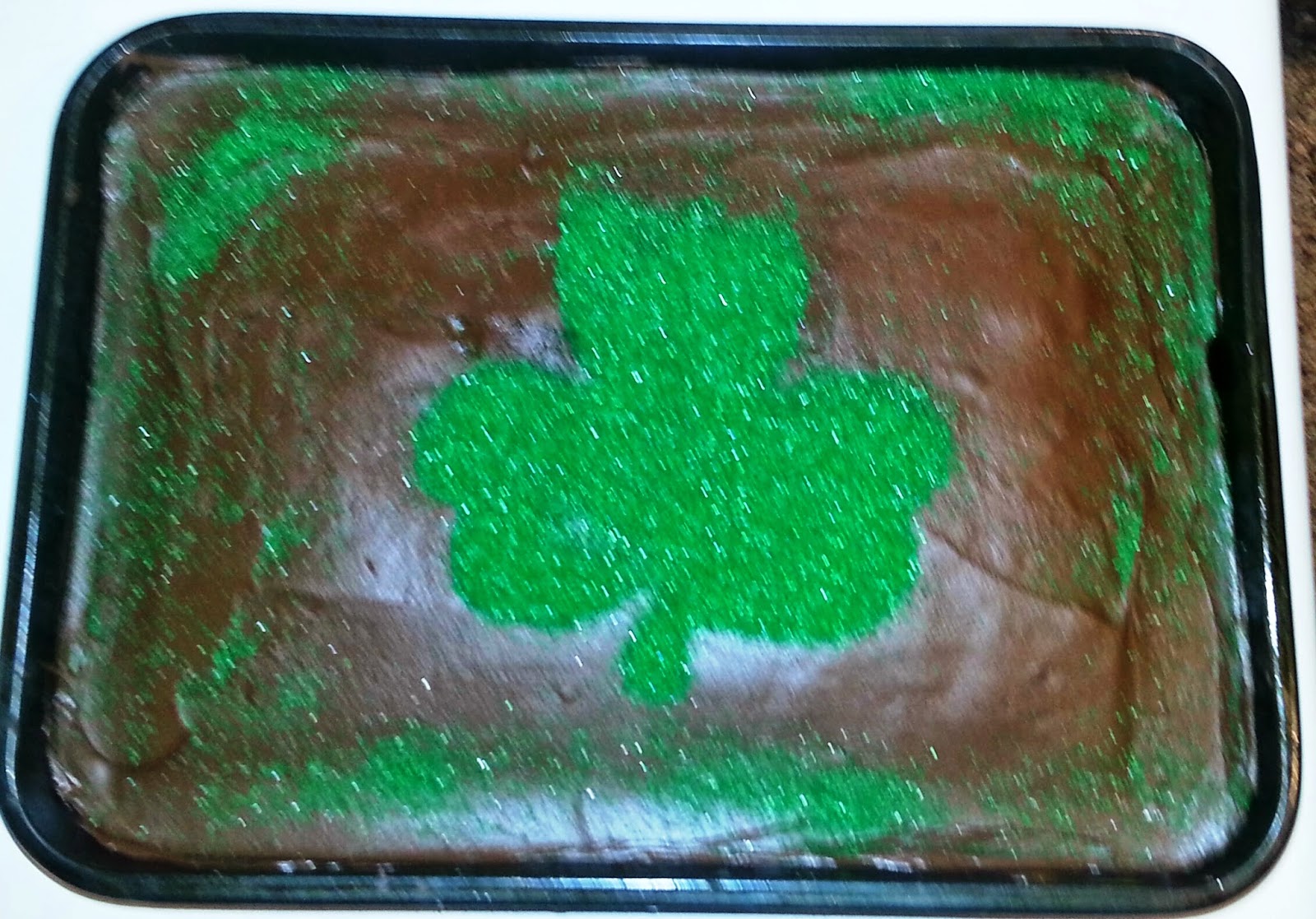 DJ and kids came up; we went to Pei Wei to celebrate the birthday and then to a movie. After the movie we ate cake and then randomly went to the Mall of America and IKEA. Beth was meeting a college friend and Abbie and Ethan went out to dinner with their dad. Eric, DJ and I walked around IKEA. It was a long day but fun.

Posted by KimmerBee at 8:32 AM