What is Up with the Gophers?

Well here we are, another week complete and I’m still training!  It is very shocking, I know!

Sunday morning I went running again. I’m very proud that I ran 3.25 miles and never walked!  It felt great, but I was disappointed that I was really slow…I mean slower than normal. :( But that is ok, at least my endurance is building.

Monday was another late night at work.  We finally filed our 10-Q quarterly report at 6:36pm.  So I didn’t get home until almost 8 and I was whipped so I decided to take a day off again.  It seems that Monday’s have become my off day.

Tuesday was volleyball night.  Our game was at 9:15pm.  Ugh! With the time change it was brutal staying up that late.  To make sure I stay awake I dragged Eric to the community center where I did the elliptical and stationary bike.  We only had 4 for volleyball so I think I got a good workout.  It also snowed…that sucked!

Wednesday was another swim day.  I only did a half mile and tread water in the deep end for 10 minutes. I know I was swimming more early this fall but I was by myself and I could swim laps for an hour easy but the Mr. has been coming with me and he doesn’t like to go longer than 30 minutes.

Thursday we had a happy hour after work to celebrate another quarter end being done.  I stuck around until after 5. With band practice at 7, there wasn’t any time for me to workout.

Friday we stopped at Eric’s favorite restaurant for dinner…Boston Market.  They were having a free tasting for Thanksgiving. Basically we got the full Thanksgiving meal so we were stuffed.  We also got our intended meal but just took it to go.  Even though we were overly stuffed we still went swimming.  It was awful…I kept thinking I was going to throw up.  I love green bean casserole but it doesn’t like me. I struggled to a half mile before I called it quits.

Yesterday was a very fun and tiring day.  I started it with Swirl waking me up at 6ish.  I really hate him sometimes and 6 yesterday was one of those times.  I poked around Facebook for a while and found this pictures and thought it described me to a tee: 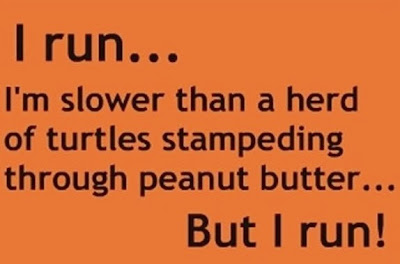 So after I kicked Swirl off my lap, I ran my normal 5 miles (I never in my life thought those words would come out of my mouth).  I only walked about a minute of the entire run!  I’m in shock…it felt great.  The weather wasn’t the best.  20mph winds suck when you are running in an open plain.  Why did they get rid of my trees???  But I survived and like I said I ran the entire time and when I got to mile 5 I didn’t think I was going to die!  I actually ran mile 5 faster than mile 3 or 4. You will see below in my splits.  SO yay me!!

Now the really fun part…Gopher game.  I love going to Gopher games. I only manage to get to one a year which is sad.  Of course I picked a day when the wind was whipping around at 20+ mph and it was 40 degrees and no sun.  But I still had a blast.  And they beat evil Penn State!  I’m not sure what is going on with them.  In August, they were picked to finish dead last in the conference.  But they beat a formerly ranked Northwestern team in Chicago, then came home and beat No. 25 Nebraska…they beat Nebraska!  The first time since 1960!  Whoa. Then they went to Indiana and beat them.  So with the win yesterday, they have won 4 Big Ten games in a row (the first time since 1973!) It is really a fun team to watch…but the last two games are against Wisconsin and at Michigan State.  I’m glad that I was went to a game this season. 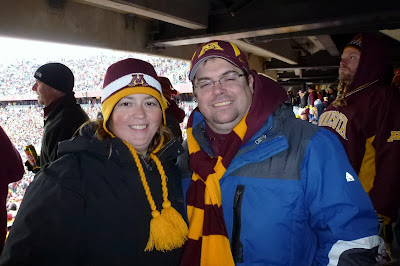