I’m in a Snow Globe 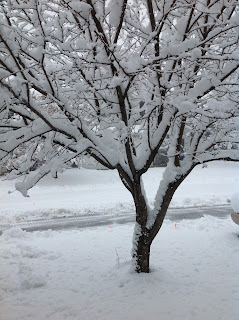 Well my plans for today have been foiled thanks to a nice snow storm.  I don’t normally complain about snow, I love the stuff. It is so pretty to watch it fall. The only time I hate it is when it ruins my plans or makes my commute long. I’d much rather it snowed on the weekends because hopefully by Monday morning the roads will be clear and our commute won’t be long. So right now it looks like we are in a snow globe that just got shook up. It is so pretty to look out and see the big fluffy snow.

So my plan was to go to the Water Park of America.  I bought a Groupon for 2 admissions for $20.  It is a great deal since it is over $22 for just one person. It was supposed to be Eric’s reward for finishing his third semester of his master’s program.  We had good intentions of going. But we drove as far as Valleyfair and realized this isn’t a good idea.  We saw a van in the ditch, visibility was basically zero and the roads hadn’t been plowed.  My hopes of warm water and fun slides had been foiled.  So we made our way home and now I’m baking instead.  I guess either way, I’m having fun today. 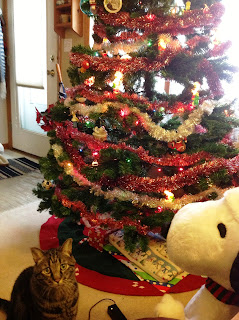 It started snowing Friday night. My commute home from Downtown was really long. I was on the bus and I didn’t have my iPad. Oh so sad! There was a car flipped in the median just south of the bridge so that was the reason for the back-up. It took me a while to drive home from the park-n-ride. Once I got home, I got the urge to put up the Christmas tree, with a little help from Swirl.  As I look at the tree, I realized I need a new one. Ours is 12 years old this year and there are apparent holes and broken limbs…thanks to Swirl.  Here is a picture of Swirl and Snoopy by the Christmas tree. I also put up the lights outside too. Putting them up at night makes it easier to see how beautiful they are and I know it probably wasn’t smart to put lite Christmas lights up while it was snowing but oh well I did it anyway.

Yesterday was quite a busy day for me.  I never really left the bedroom. I did a major cleaning.  It was in dire need of a scrub down. I took away Swirl’s “jungle” so he isn’t happy with me. He laid on the bed and glared at me all day. No more late nights of wonder what the heck is Swirl chewing on. I threw a lot of stuff away.  Reorganized book shelves, picked up all the garbage, dusted all the stuff…the Christmas bears were very dusty, folded all the clothes and vacuumed. It was a major undertaking!  But now the room is clean, organized and feels huge again.

Well my cake is almost done.  Next is frosting. Mom’s chocolate frosting…my favorite!
Posted by KimmerBee at 12:35 PM

Email ThisBlogThis!Share to TwitterShare to FacebookShare to Pinterest
Labels: Snow