Booby Cay, Rick's Cafe and what is that F-ing Beeping?

I'm wide awake early from a very awful night of sleep.  Well the first 3 hours were ok and the last 4 hours were ok...it was the 3 hours in between where I couldn't sleep. I woke up around 12:30am with this insane itching on my legs. It wasn't the jellyfish sting, you can't even see that anymore their potion worked wonders. Jamaica has sand flies here which are like a mosquito   They suck. You can't see or feel them biting you but you get the welt later and it itches like crazy. I have probably a dozen or more bites on my leg and there were all itching at the same time. I scratched my legs so hard I thought they were going to bleed. Finally I got up and put cortisone cream on my legs which helped a lot. I'm so glad I brought that along.  So I tried to fall back to sleep but there there was this annoying beeping noise coming from outside our room.I have no idea what it was but it was driving me nuts.  So I turned on the TV to see the last 30 seconds of the Gopher Bowl game. The first thing I saw was the Gophers throwing the interception and Texas Tech throwing 2 passes and kicking a field goal to end the tied game.  Well that made me a little upset but I'm actually amazed it wasn't a blow out. Way to go Gophers! I thought I was tired enough to shut the TV off and fall asleep...wrong. The damn beeping noise again. Finally I put the TV back on and settled for the first Harry Potter movie and eventually fell asleep but I know it was after 2am.  I'm not sure when I shut the TV off. 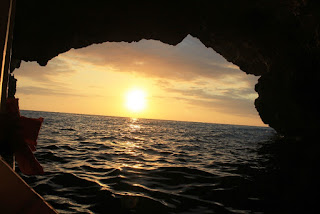 Last night was lot of fun and was kind of an adventure.  We decided to a sunset cruise with the same guys who did the earlier snorkeling.  Well another group had organized a ride out to Booby Cay, an Island not far from here.  Well we got to do both.  We went out the island which was beautiful. I found an awesome seashell...I'm talking a massive seashell. We hung around for a while so they could do some snorkeling and then we went to Rick's Cafe, Lighthouse and caves.  I got a nice picture of the sunset from the cave. Then we went to Rick's where one of the guys in our group jumped from the cliffs. I don't think I would do it from that height. Maybe the smaller ones.  Crazy! The group we were with were interesting.  There were 3 couples and one other guy. They were from all over the US. The one girl was from Michigan and her father lives here part time so they were staying at his house.  The others were from Northern California, Memphis and Atlanta. The were also smoking ganja (aka pot) most of the ride. It was a long cruise but we saw lots of interesting things.
Posted by KimmerBee at 6:44 AM