Look who I ran into

Look who I ran into at the bookstore.  Well actually I didn't just run into her, I saw that she was doing a book signing at Magers and Quinn Booksellers in Uptown (Minneapolis).  Greg, Celeste and Evelyn said they would go with me so that was nice.  Callista didn't know me at first. She introduced herself and I responded with "and I'm your cousin." Then it took her two tries to get my name right.  First she guess from her mom's side and then she said Kim and her eye's lite up. She said that my hair is so long now. I guess that isn't too bad.  We talked for quite a while about the family and about her parent's 50th Anniversary party. It was nice.  I bought her books and she signed them for me. Evelyn got a book too. It was a good day. 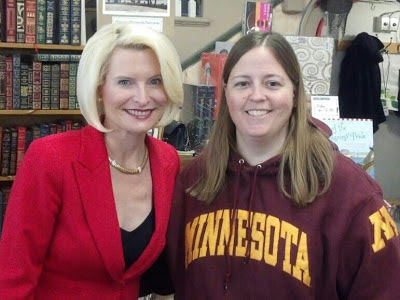 Early in the day I took Greg, Celeste and Evelyn's Christmas pictures. Some turned out really nice. I can't wait to get their card.

Meanwhile...Eric has been working on his paper.  It is due tomorrow.
Posted by KimmerBee at 4:34 PM