It has been a really uneventful week for us. Last Sunday Eric (and I) were working on his paper that was due that day and the Halloween candy bowl was between us. It was a dangerous situation. :-) 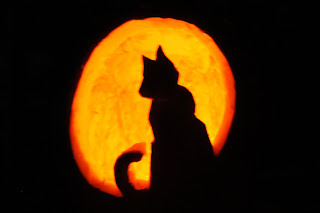 I finally carved my pumpkin on Monday. As you can tell it is Swirl inspired.  It wasn't too hard to do when you have an outline.  I almost decapitated the head though.  Whoops.

Tuesday was a double header in volleyball. Our old captain, Amanda, played with us. She has deserted us this year as she moved all the way to Canada (aka Elk River).

Wednesday was Halloween. We had about 20 kids. It is so sad that we didn't have more.  But we don't have much candy left so that is good.  Swirl is really funny. He would sit by the door.  GROWL and run upstairs. 15 seconds later we had a trick or treater at the door.  He did this over and over again. He is such a silly cat!

Thursday was the typical band night.  We are playing lots of Christmas music. That is the one disadvantage to playing in the band...Christmas music in October.

Eric had class Friday so I had the whole evening to myself.  I went for a run at the community center. It wasn't too bad.  I've really cut down on running...shame on me.  After that I watched a marathon of "Becoming a Dallas Cowboys Cheerleader." I know terrible!  But it was very interesting. When Eric came home from class I was still watching it. He was a bit surprised that I watch that show.

Yesterday Eric had class most of the day so again I was home alone.  I had a Band council meeting but other than I did nothing. After Mass, we went to Greg and Celeste's for dinner. They had the amazing chicken pot pie from Costco. They are so good but huge.  We had a nice evening.

Today we went for a Sunday drive to Hinckley.  We started at Interstate State Park in Taylors Falls, MN, took the back roads to Wild River State Park.  It was closed!  Stupid deer hunters...We weren't allowed in because of a controlled hunting. 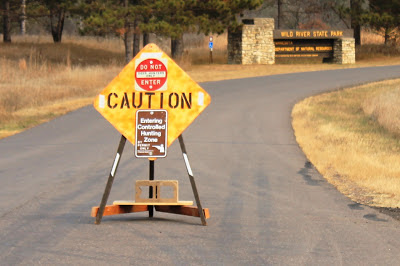 We ventured to St. Croix State Park next and then we went to Grand Casino to meet my Mom, Aunt Bev, and Aunt Grace. We had a nice dinner and I broke even on the machine.  It was a good day (besides the closed park)

Posted by KimmerBee at 9:06 PM