Where did Fall go?

Not much has happened in the last couple of weeks. Soccer is done and baseball is over (at least for the Twins). Summer is over and Winter is here.  Not sure what happened to Fall.  Just like last year, it was 80 degrees earlier this week and today it barely got over 40.  It has been cold and windy the last couple of days.  Not cool!

I’ve gone for some rides on my new bike, averaging about 10 miles a time, and I love it! Last weekend Eric was looking at my new bike with longing so I suggested we go for a ride.  I rode my trusty Townie and Eric rode my new bike. Half way through we switched bikes.  It was pretty humorous to see Eric ride my blue Townie.  LOL! 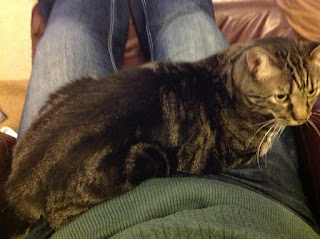 Band practice has started back up.  It has been a 2 month break and it was so hard to get back into it.  I really should practice…but I won’t.  Actually, speaking of music, the Minnesota Orchestra musicians are currently on strike.  They don’t want to take a $20,000 pay cut. They currently make over $100K! Even at $80K I’d be happy to just be playing my trombone.  I choose the wrong profession and should have practiced more. :(


Yesterday and today Eric had class so it has been just me and Swirl.  Yesterday when I got home from work I was trying to clean the house and he followed me everywhere…upstairs, downstairs, here, there, EVERYWHERE! Finally I just sat down so you could sit on my lap.  Just like a little kid! 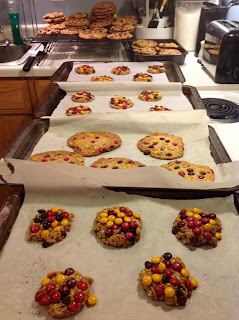 Also yesterday I made Monster Cookies again.  I forgot to make the ¼ recipe and instead halved it.  I was so sick and tired of making cookies.  It was about a 5 hour non-stop venture.  I was able to listen to the Independence/Whitehall football game on the internet while I was making them so that was nice.  Unfortunately, Independence didn’t win their homecoming game.

Volleyball is starting on Tuesday.  I’m so happy to be playing again.  Band and volleyball are the 2 things that get me through the winter.

Posted by KimmerBee at 7:09 PM