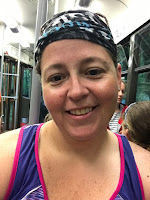 The race I have been looking forward to for two years had finally arrived and I was not ready for it! My training lately has been terrible and with the heat, hills and cobblestone, I was in trouble. We got up early and took the tram to Brussels from the house. We had to drive to the tram stop. There were 40,000 people running this race and there were not enough port-a-potties!  We stood in line forever. We meet a few people that spoke English but mostly it was just Eric and I. They had 6 waves and we were in the last one. They started each wave with a cannon shot. That was a bit freaky.

I wanted to have a good race, then my goal was to finish faster than my half marathons, then my goal was just to finish. This race was rough from the beginning. The first mile was mostly downhill which wasn’t bad and there was a lot of weaving around people who were walking. The first mile was going great but my legs started cramping and they felt like crap most of the way. I ended up with 13:37 for mile one but the next 7 miles were just crap. I’ve never had so many 15 minute miles so early in a race since I started running. I know the heat was the major factor, it was 70 degrees at our 10am start. Before the race it poured so it was also very humid. Yuck! It was a very hilly course as they kept running us down into tunnels and then back up the other side. We did that at least 3 times. I did so much walking because those uphill were kind of steep, short, but steep. 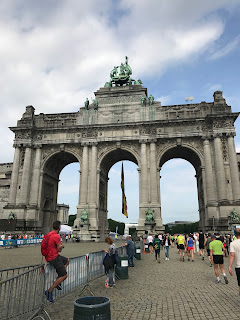 The water stops were well placed but they gave us actual bottles of water so there were bottles and caps everywhere! It was such a mess. The route was mostly shaded in the beginning, thank GOD! There wasn’t wind either so it was a hot, thick air race. We ran through parts of Brussels and in some nice parks. There was music throughout the course which helped, there was much crowd support but there was enough. You know it is a bad race when you are celebrating miles that are under 15. Haha. Somehow mile 9 was my second fastest at 13:51. I’m not sure where that came from but it made me happy. I finished the last two miles walking. It was up hill and there wasn’t much shade. My body had had it by this point and I didn’t want end up on the side of the road like some of the people I was seeing. I was never so happy to see a finish line and get my medal. 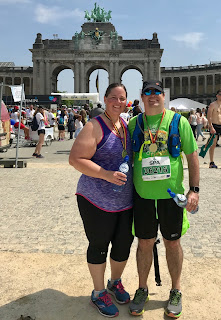 After the race, I felt pretty good. We took Michael and Juliette around the town to the Royal Palace, the Grand place and the peeing boy. 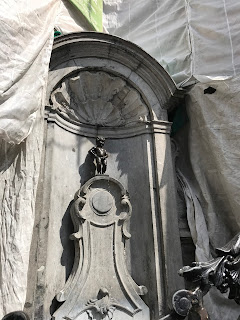 We had Starbucks, ice cream and finally called it a day and headed back to the house. We went out for steak for dinner and enjoyed the night eating chocolates around the table.

Posted by KimmerBee at 4:00 PM