I’m very late in my reviews of the races this weekend. I had 3 races and they were all fun! 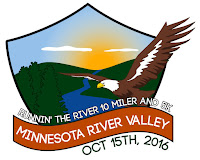 Running the River 5K
The first race was the inaugural Runnin’ the River 10 Mile and 5K. Since we had to pick up Phil at the airport, we had to do the 5K for the sake of time. It was in Huber Park in Shakopee at 9 am so we felt like we had to do it since it was down the road from our house. The run was supposed to go towards Chaska but with all the recent rain, the river was flood and the course had to move to plan b which was running towards Valleyfair on my normal running course. Awesome! The 5K race ran from Huber Park to Memorial Park and then back. When we had to run up to the bridge, I almost ran down under the bridge (my normal training route). Oops!  My goal with this race was to run it sort of fast but not too fast for the other 5K later in the day. As long as I was under 39 minutes, I was happy. On the way back to the finish we had to run on a portion of grass. Of course I found the one large rock and snap, my ankle was on the ground. Crap that hurt, what did I just do?? It hurt like heck but I was pretty sure it wasn’t broken, just sprained maybe so I ran to the finish. I went up to the chiropractor who massaged it and then taped me up for my other races this weekend!  My time was 38:32, a 12:26 pace. 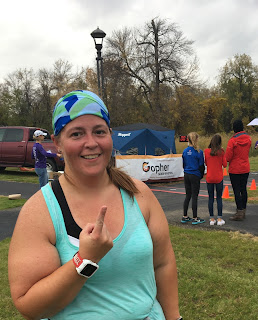 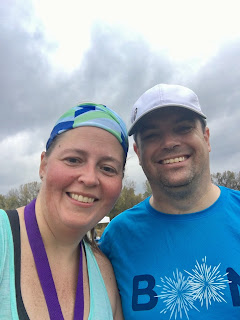 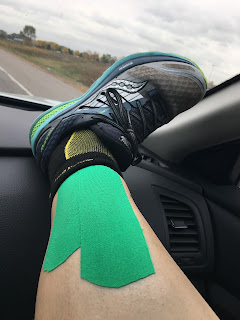 We made it to the airport in time to pick up Phil, ok we were a little bit late thanks to my injury. We stopped for some breakfast before making it home so he could take a nap. After an hour or so we drove down to Mankato. We checked into our hotel, went to the expo and got ready for the 5k.

This is my second pig related race in less than a month. Again my goal for this race was to keep it under 39 minutes and not kill myself for the 10k on Sunday. This is the third year of running this event but my first time actually running it. I walked with Mike the last two years so this was going to be a PR for this race no matter what. My ankle felt ok so I decided to run it. I did struggle a little bit and had to walk some but overall it was a good race. Alec ran it and of course he took off at the beginning. I caught up to him after mile 1.3. He was telling me how he was beating Eric by 15 minutes. Funny kid. I told him we had only been running 15 minutes so he could have done that. He was also saying he was a faster runner than me. Oh those are fighting words boy. He may be able to run faster than me but I have endurance and can run longer. I beat him by over 10 minutes and when was coming into the finish I asked him what happened to him since he was so much faster than me. Haha! My time was slower than the first one, 38:55, a 12:33 pace. I kept to my goal of finishing under 39 minutes…barely! 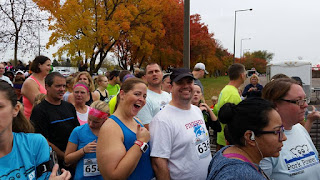 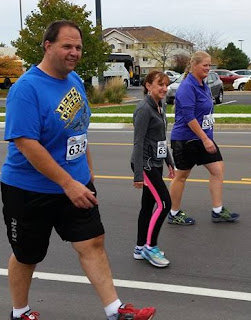 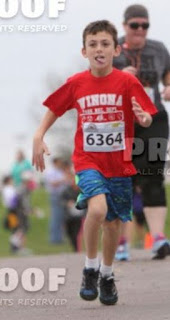 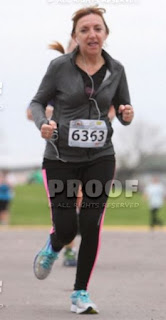 After the race we had a birthday party for Byron. His birthday was the next day. We got pizza from Pagliai's, the best pizza in Mankato! Most of my family was there, including Danielle. And DJ, Abbie, Byron, Paula and Phil from Eric’s side. There were 14 of us. It was a nice dinner. Mom made Byron a carrot cake with cream cheese frosting for his birthday. There was also a decorated cookie that Paula bought. I found a card that said “Tomorrow I will start running” at work on Friday and thought it was the perfect card since he was running a marathon tomorrow. We all signed it. It was a good time. After everybody left I went into the hotel for a bit. It was nice. There was a guy in there bragging that he was going to finish the marathon in 3:15. Well he didn’t finish. He got the half way point but never finish. Haha! I love braggers that get it in the end. Ha! 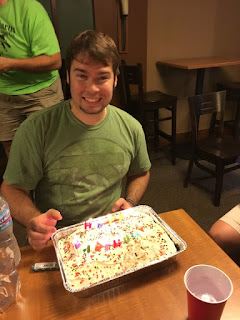 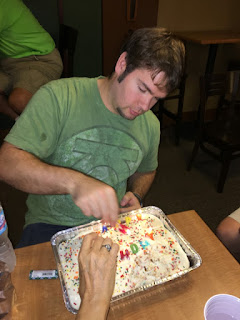 This is by far my favorite race of all time. This was my third time running and I just love the nice long downhill at mile 3.75. I just struggle through the housing development until we pop out on Stolzmann Drive for the long (half mile) downhill sprint. DJ, Eric and I ran this race. Eric was long gone and so was DJ. I eventually caught DJ before the hill. It took me almost 4 miles to catch her. I went back to the 45 seconds running /15 seconds walking intervals. They seem to work the best for me at this point. I kept a very consistent pace for the first 3 miles: 12:40, 12:36 and 12:38. Most of mile 4 is down the hill so my pace was 12:05 and some of the mile 5 is also on the hill but I slowed down once I reached the bottom 12:28. Mile 6 was terrible but at this point I was just wanted to be done. Mile 6 is the worse of this race because I sprint so fast down the hill because I don’t hold back and I get to the bottom and I’m dead. It took me 13:27 minutes to run mile 6. DJ and I sprinted to the finish, I managed to beat her by one second! Ha! My time was 1:16:05, a 12:15 pace according to the official results. My watch said the course was short and my pace was 12:36. Either way all three races this weekend were very consistent. A success in my book! 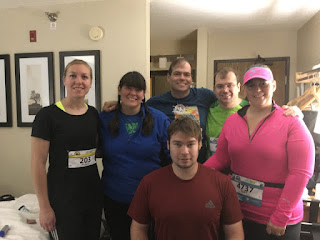 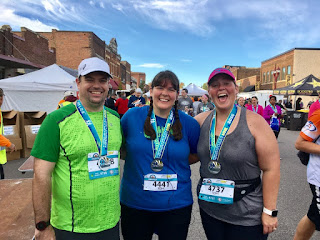 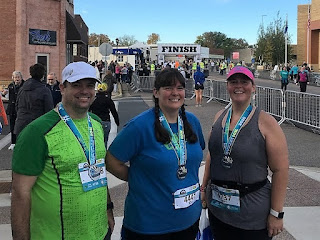 Marathon
After our race, Mike picked us up and we went to Cub for some donuts and back to the hotel to pack up our stuff. We dropped DJ off at mile 11 of the marathon where Abbie was volunteering. After eating donuts and saying our good byes, we picked up DJ and went looking for our marathoners. We saw Phil running around mile while we were driving to our first stop, Mile 17. Soon after we got there we saw Byron and Paula. They looked good, keeping a 10 minute pace. I wish I could run that fast! Ha! Phil came by 15 minutes later. He didn’t look as great as Byron and Paula but was still trucking. We stopped again by mile 21. Abbie met us there. We saw Byron and Paula and gave them some water. Abbie ran with them for a while. Not long after that Phil came by. I got a video from Susan to show him and we gave him Gatorade and water. Abbie ran with him for a while. Almost to the finish line! I think he appreciated it. He looked better at mile 21 than he did at mile 17 so that is good! Eric and I got the finish line in time to see them all finish. It was a great day! 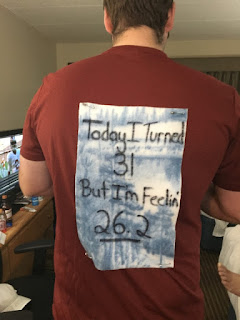 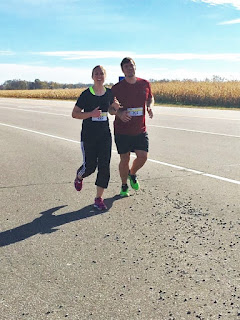 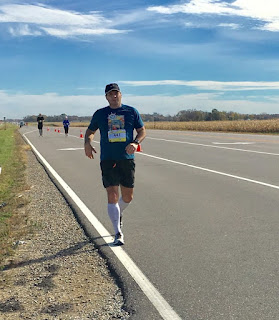 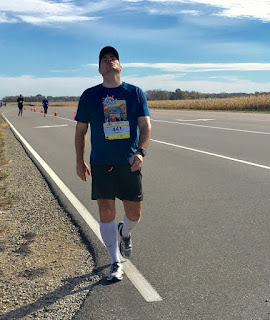 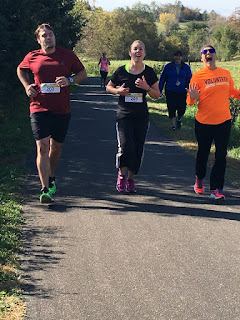 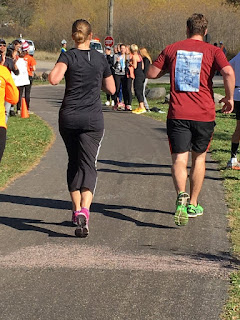 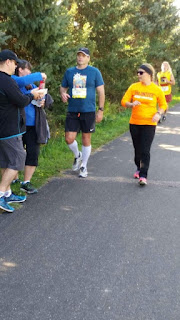 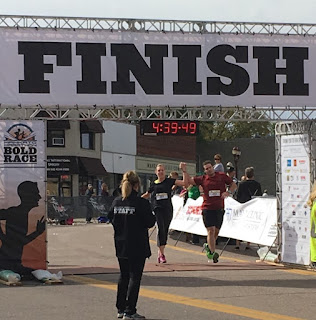 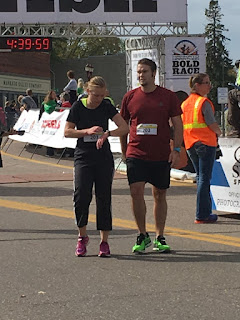 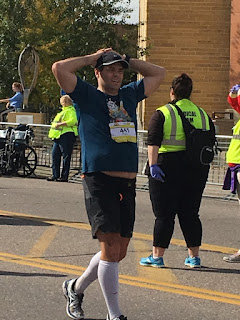 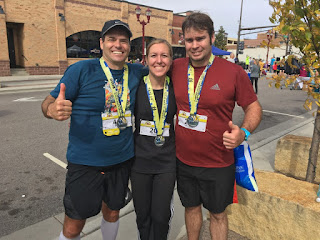