A Race, the Minions and Mini Golf

The title pretty much sums up the weekend. Friday after work we picked up DJ and drove down to Byron and Paula’s house in Sioux Falls for the weekend. We got in a little late Friday so we just watched part of the Despicable Me 2 movie.

Insane Inflatable Run
You would think after last year’s experience with this race I would have known better but being the sport I am, I said I’d do this race again. I think I will now retire from these stupid races. I’m not doing a separate race report for this one because I’m still a little upset and in pain. Last year I got my hand and wrist stepped on by a big guy. I seriously thought my wrist was broken. Well this year I one upped myself. On the hardest obstacle I bounced over a “bar” thinking there was going to be something on the other side (I couldn’t see and the bar was pretty high so I had no choice but to bounce. Well I was wrong. My head (specifically) my face/forehead met the gravel after a 5 foot fall. Yes, I said 5 foot. And I didn’t have my hands to break my fall as I was trying to staying on the damn inflatable bar. I crashed down into gravel. I curled up into a ball and screamed. It hurt so bad…I just laid there for what felt like an eternity. I finally composed myself and removed the larger pieces of gravel out of my shoulder and elbow. And picked myself up and finished the obstacle and told Eric (well actually screamed at him), “I’m never doing this $%&ing race again!” I was very dizzy the rest of the race and basically had to walk the rest of the way. I have nice bruise on my shoulder from the experience. Thankfully my face doesn’t look bad. I had a red mark but no bruising. It wasn’t a pleasant experience…I did not have fun. The other guy in the picture is “Fish.” A friend of Byron and Paula…and a State Representative in the 19th District…Byron likes to tell people that. 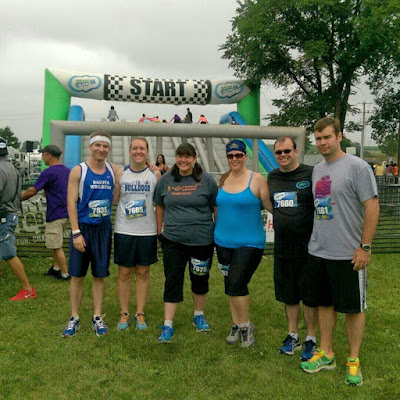 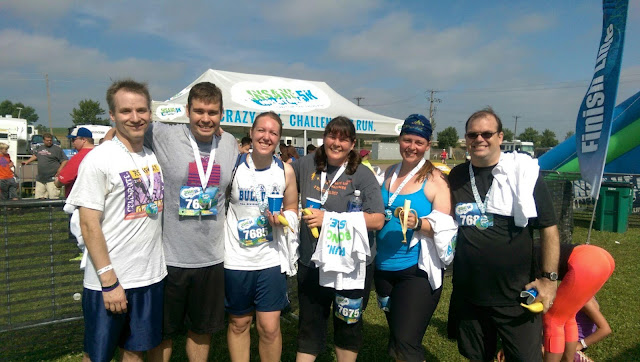 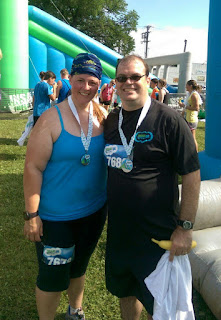 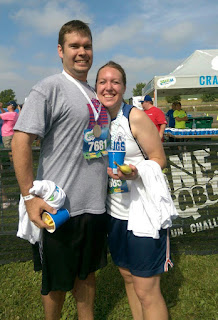 Minions Movie
After we got home and quick shower where I felt the stinging of all the places the gravel had embedded into my skin, I napped on the couch. Around 3pm we met Paula’s parents and sister, Lindsay, for the Minions Movie. I thought it was pretty good. I have seen the first Despicable Me movie and parts of the second one so I knew who they were but not that familiar. It was funny and the fact it was set in London made it that much more enjoyable for me.

Mini Golf
We went to the District for dinner…it was expensive and the food wasn’t great but it was ok. I should have chosen something different to eat…my bad. The service was a bit slow. Next we went to play a round of mini golf. It was so much fun…but I won…by a lot…so of course I had fun! Maybe the fall to the head has made me a mini golf pro? The only bad holes I had were the three after Eric said that I was going to run away with the game. Never compliment me in the middle of a game…it gets in my head and I imploded. But I managed to get my game together to win by 4 or 5 strokes ahead of the Eric who managed to finished 2nd after a horrible front 9 holes. It was a great night…after a horrible morning.


We slept in a bit Sunday morning…and by slept in I mean 7:30. I really wish I could sleep more! Paula made us strawberry waffles and bacon and we just sat around until we had to leave at noon. It was such a hot and humid day that really there was nothing anybody wanted to do.  We wish could have stayed longer but Eric had a soccer game at 6:30 so we had to leave. We dropped off DJ and helped her get her AC in the window. Like I said it was a miserable day. We got home in time for Eric to relax a bit before his game. I went for a run…it was so hot and humid. I managed to get a mile in of actually running and walked the other 2 miles. So far I’m doing well on my everyday challenge (run at least 1 mile every day).  I’m 12 for 12. Well actually 13 for 13 because I ran on June 30th.
Posted by KimmerBee at 5:12 AM