It really is a busy summer. I guess being trapped in the house for 9 months of the year because of the cold I guess we cram everything in during the summer.

Running Around
Anyways, yesterday morning I went for a 3.76 mile run in the heat and humidity. Why such an odd number? Well I wanted to get to 55 miles for the month. I like round numbers so I ran to get a round number. I should have gone for a much longer run but that was all I could muster. The first 2 miles I did straight running and I was slow. The last 1.76 miles I did the run-walk method (Galloway) and I was actually faster. There may be something to this method. I would like to do straight running but for longer races I might have to switch to this method.

After the run and shower we met my Mom and brother in Bloomington to see my brother’s friend’s daughter play in the National Fast Pitch Softball Tourney. We got there just in time to see last inning and the extra inning. Her team won. It was exciting! After that we come home and relax for a bit before heading to Costco for shopping and lunch at Pei Wei. Mike went back to Bloomington for the next game, Mom, Eric and I stayed home and relax some more. DJ and Abbie came over and eventually they went to the Twins/Yankees game. Mom and I went to Julifest.

Julifest
Mom and I went solo this year because of the baseball game. Greg and Celeste joined us for the Polka Mass on the church lawn. It was a hot day and evening. The Polka Mass was great as usual. We walked down to the tents for food , bingo, music and games. I had a hamburger and I was disappointed that it was way under cooked. And there was a piece of wire brush in the burger. I felt this poking pain in my cheek and I was choking on something I eventually got it out and thank GOD I didn’t swallow it. My mouth hurt the rest of the night and of course I was terrified that I swallowed one and it is tearing me up inside. I’m so irrational sometimes! Mom enjoyed her German potato salad. We played Bingo for an hour. Mom won $17.50 and a free hot dog. That was nice that she won. I, of course, didn’t win. We played some of the other adult games in the tent and listened to the music. Before we left we had a piece of pie. We got home around 9pm, just in time for Mollie B’s Polka Party. Haha!  The rest of the family got home just before 10pm and ordered Pizza Hut.

Ribfest
Mike and Mom went to another softball game this morning. They won by a lot. Abbie and DJ left this morning after breakfast; Abbie had to work. Around 10:30 we went to the Mystic Lake Casino for some gambling. Of course I didn’t win. We walked over the Ribfest (it was at the casino). Mike had ribs from two different places. Eric and I split a pulled pork sandwich from Texas Outlaw. Eric didn’t like it. I didn’t really like it either but I ate it. Eric liked the ribs from the Ausom Aussie place.  We had some cheese curds (gross!) and some mac n’ cheese (also gross!). Needless to say the places we tried didn’t win our hearts. Eric said the Ben & Jerry’s ice cream was good. Ha! Before we left we stopped in the tent and played some free Black Jack. After a few hands we each got $5 chips. Eric got two $5 chips because he is better than us. We went over the Little Six Casino on our way home to use the chips. We ended up with $35 in 3 hands! Not bad for something we got for free. Shortly after that Mom and Mike went home.

Julifest Again, Relaxing and Visitors
Eric and I went to Julifest this afternoon to register Abbie for the car they are giving away. We also had to use the free hot dog coupon. It wasn’t really a hot dog. It was more like an Italian. I liked it, Eric did not. We listened to the polka music for a bit and played some more adult games. After about an hour we came back home…it was just too hot. After unintentional nap, Byron and Paula visited to return our chairs we left at their house a few weeks ago. They had their dog Rio along. Swirl didn’t really like Rio. They stared at each other for a while. But they really didn’t have any interaction.

I finished the weekend off with another hot run. So far I have ran at least a mile every day in July! I can’t wait for August 2nd so I can get a day off. :)

Pictures from the Twins Games 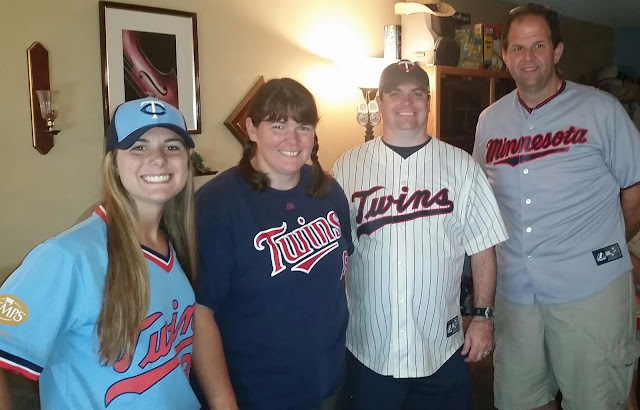