I’m a little late on this but I’m wide awake at 5am in Pahrump so I thought I’d could catch up on the blog. Christmas Eve, after a 4 mile run, we traveled to Eau Claire for a party at my cousin Paula’s house. It was good to see some of my cousins again and the food was good…lots of deserts desserts (I’m in the desert, I got confused on which word)! Thankfully I mentioned that St. Olaf (right by Paula’s house) had 5pm Mass. We were planning on going to the 10:30 mass in my hometown parish. I wasn’t too excited for staying up that late…I’m more of a morning person (which is why I’m up at 5am). I wish I was a night person and could sleep in but alas. I was happy to go the Christmas Eve Mass and see them bless the baby Jesus and the manger. After Mass, we picked up Aunt Bev and took her home. I had an exhausting day and was in bed by 9:30.

Christmas
Like I mentioned above, sleeping in and me don’t work. I was up around 4am. Mom worked me like a horse…if only I could sleep in. LOL! We had a great lunch. Danielle, Dylan and Bradley came down and Becky, AJ and Trevor (friends of Mike’s, Becky and Trevor lived with Mike for a while). We played 10,000. Becky won the first game and I won the second. It was fun. Everybody stayed around all day. The kids left around 6pm. We picked up some pizzas at Kwik Trip for a late dinner, Becky and gang were still there. They finally left after 8pm. Again we were in bed before 10. Even Eric!

Boxing Day
Ok so I know we don’t celebrate Boxing Day but we basically do…we do what they do in countries that have it…shop, shop, shop! But first I had to make some cupcakes. The woman who was going to make Danielle’s bridal shower cake couldn’t make it because of her sick mom. Mom tried to find a store, Hy-Vee, Wal-Mart, etc…to make a carrot cake (Danielle’s request) but none of them made carrot. So we made cupcakes. At some point I had a lightbulb go off and remembered that my friend made a princess cake a while back and it was in the shape of a dress. So I googled cupcake wedding dress and found many examples. I was so excited. So I made the cupcakes and realized that mom accidently picked up a spice cake mix so I had to go get another carrot cake mix. We swung by Mc Donald’s for a breakfast sandwich and to harass my mom working behind the counter. She looks so cute in her Mc Donald’s hat!  After mom got home from work, we picked up Anna and went shopping. We had to get stuff for the bridal shower including a gift! After all that we picked up Aunt Bev, Eric was blessed amongst women on the drive home!

The Cake!
So after we got home from shopping mom and I put the cake together. Mom is amazing at frosting. I bought some pearl Sixlets for the waist. Here is the final result. 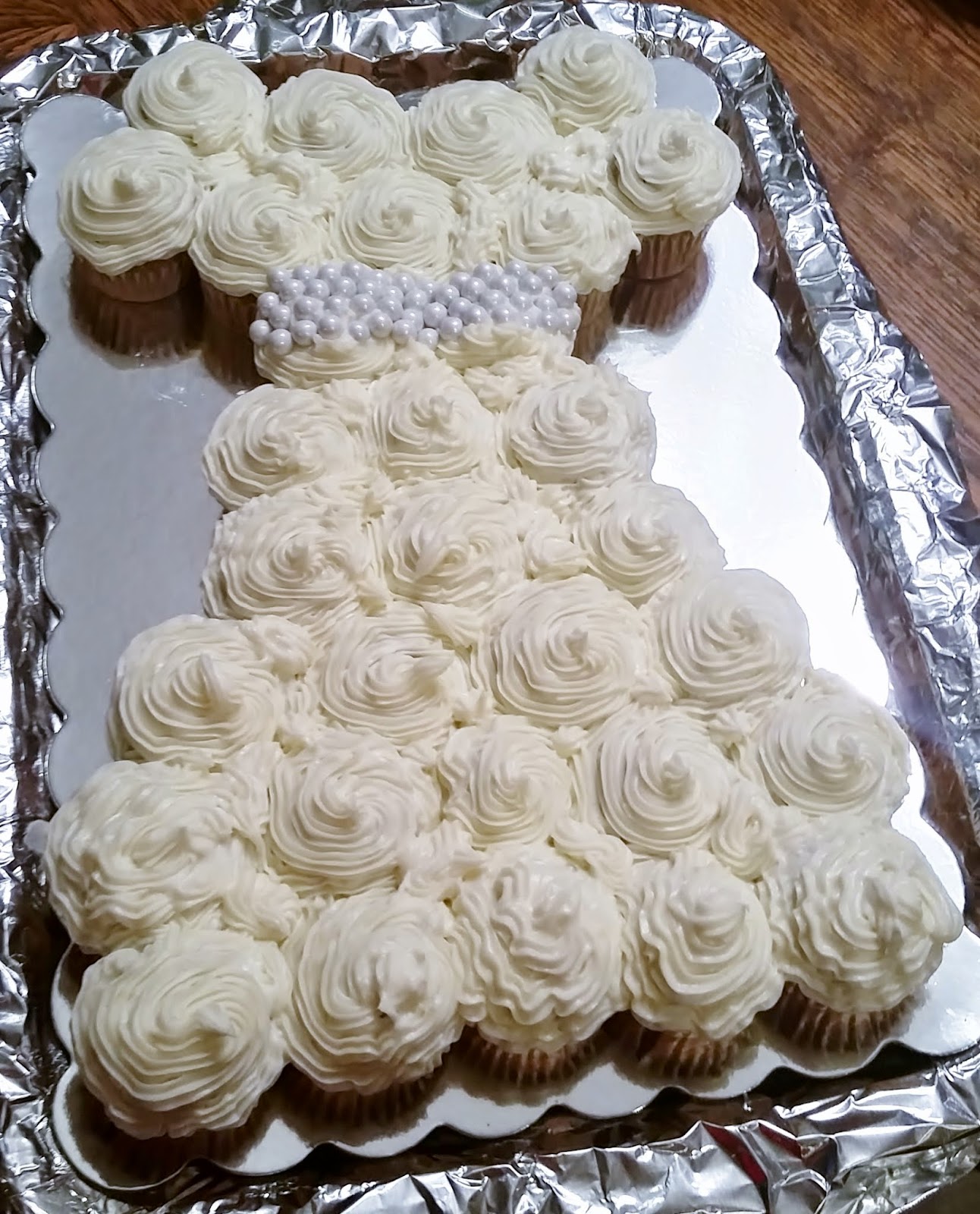 We finished the night at the Newcomb Valley Bar for a Friday fish fry…oh Wisconsin!
Posted by KimmerBee at 7:00 AM