Expo
The Expo was at the Hyatt Regency at the Arcade. It was a cool looking building. The expo was in the basement and was very small but that’s fine, we were out of there in less than 15 minutes.

Pre-Race
We woke up to thunder, lightning and heavy rain. It was not looking to be a great start to this race. I’m not sure where the storm came from because the night before just looked to be hot. We got ready and went to the hotel lobby and realized that walking a mile in this crap was not an ideal thing. It is only a mile walk to the starting line, but I really didn’t want to show up drenched with wet shoes. I hate running in wet shoes. It was already going to be a miserable race. So Uber came to the rescue. Best $15 I spent on the trip, I got to the start line dry. By the time we got to the Rock Hall the heavy rain was done, just a little sprinkle but the lightning display was still going. They delayed the start 15 minutes. We ran into the Rock Hall to use the bathroom and stay dry from the lingering rain drops. 5 minutes before the start we wandered over to the starting line and another big crack of thunder and another lightning strike  and I thought for sure we were going to be delayed again but nope, we started. Thankfully the rain stopped and my shoes were mostly dry. :) 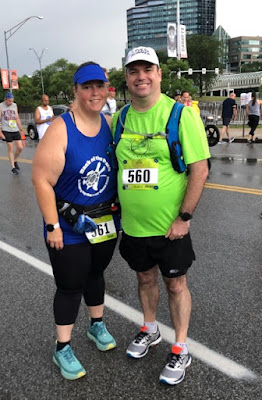 Start
There were only about 900 people running the half, less than I thought. My training leading up to the race was not great. My longest run since Hatfield & McCoy was 8 miles. With all the traveling, I didn’t have much time for running. But that is ok, I got to see Dylan a lot in July and that was more important! I decided to start running 1 minute and walking 30 seconds. I was going to take it slow. I usually run out to fast and then crash and burn. Today I was going to take it slow. I did good for the first couple miles. I stayed on my 60:30 and had to 13:30 miles. During mile 3 I started running with Melody. I veered of the 60:30 and started doing more of 60:60. When I started running with Melody, I got trapped in my mind game that I need to run fast for the 60 seconds and then I couldn’t recover in the usually 30 seconds. I don’t really care because honestly my goal with this race was to finish before the cut off of 3:45.

Now my slowest half ever was 3:30 and that was when I was suffering from strep throat, bronchitis and stuffed up nose. Other than my lack of training, I was perfectly fine for this race. The only thing that could drag me down was heat and thankfully it wasn’t horrible for most of the race. The sun was tucked behind a cloud. When it would peek out it got hot fast but shortly after that it would go back behind the clouds. I’m surprised I did as well as I did for the first 5 miles. I was keeping a consistent pace and didn’t get over heated.  In addition to Melody, we also met Sparks from Philly. He was speed walking, I walked with him for a bit and man he was fast. We decided to stick around him for a while because he made the comment that he always has chest pains for the first 4 miles of every race!!!  What????

Miles 4 and 5 were through some “interesting” parts to town. We also ran through the Cleveland Clinic campus during mile 6. So if I need medical assistance, this would have been the best mile. Haha!

Middle
Mile 7, 8 and 9 were very beautiful. We ran down Martin Luther King Jr Dr. and the Cleveland Culture Gardens.  There was lots of shade and gorgeous gardens. They had gardens representing various countries. The Syrian was the best with the arches, it looked like the perfect place for a wedding.  This is the area we lost Sparks. He beat us by 5 minutes. Haha!

Finish
Beginning of mile 10 was along the lake. We didn’t get to see much of the lake because there was an airport in the way. And it wasn’t an exciting airport with big planes…that would have kept my interest. I had a funny thought on the road when I realized that several years ago, when Eric and I visited Cleveland, we were stuck on this road because we didn’t know there was an airshow going on…it took us forever to get through that traffic jam. I never would have thought then that one day I’d be running a half marathon on this road. And here I am! We could see the Browns stadium for the entire time and it never got any bigger so it never felt like I was getting closer to the finish. By this time, Melody and I were speed walking. I mentioned we could run again and we both cracked up laughing and said nope! When we got close to finish, Melody said we had to sprint so she yelled at me to run faster and we crossed the finish line at 3:17:43. It seems that is my “lack of training” time. Someday I will train and get back under 3. I did it last year at Grandma’s full marathon. 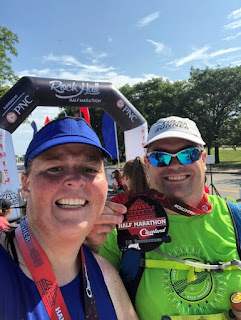 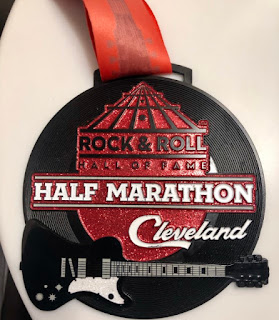 Overall this wasn’t a bad race. I did way better than I expected…I thought it would be another 3:30 time. There wasn’t much at the finish line. I got my huge medal and bottle of water. Eventually found a banana and Eric. We didn’t waste any time at the finish line…we got an Uber back to the hotel where we crashed. 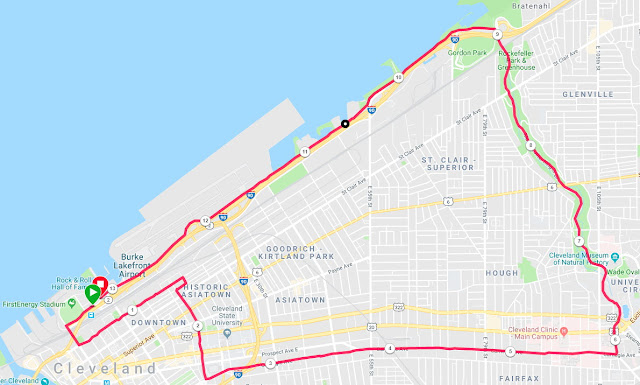 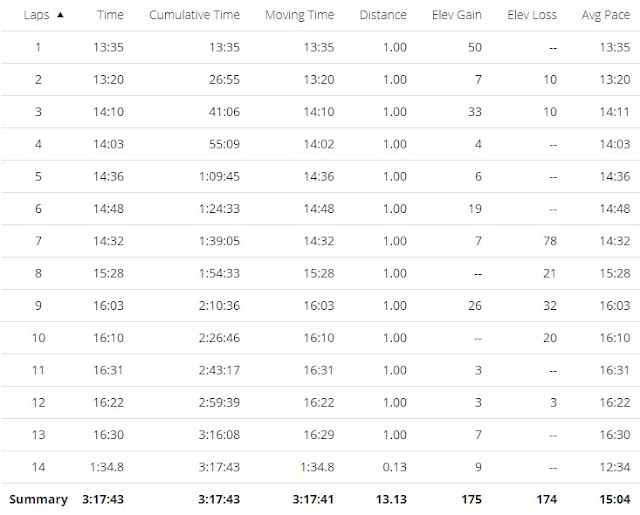 Posted by KimmerBee at 6:14 PM