Our flight arrived super late…almost midnight late. Thankfully I got some $10 promo codes from Lyft so we took that to our downtown Playhouse Square Cleveland hotel. Otherwise it would have been an over hour bus ride. Ick!

Saturday fun!
Saturday morning we started out with breakfast at Starbucks…if we would have known about the cheap diner next door we would have skipped Starbucks! After that we walked to the Expo to pick up our bibs. It was a small expo but that’s fine, we were out of there in less than 15 minutes. We walked back to the hotel to drop off our stuff and headed to the Rock and Roll Hall of Fame. We got free tickets with our race packet. Honestly, I wouldn’t have paid to go see it. But since it was free, why not?

It was about a mile walk from the hotel. It was a great warm up to the walk for the race on Sunday…we started at the Rock & Roll Hall of Fame. We checked out a couple along the way and got some nice pictures of the lake and Brown’s stadium. 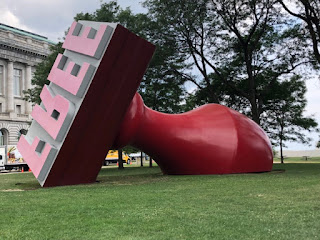 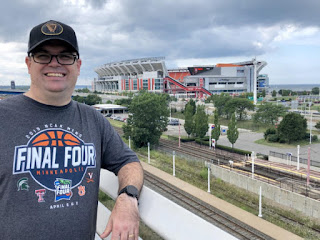 We spent about an hour and a half at the museum before we headed back to the hotel. There was some interesting exhibits but overall I found it boring. The room that actually has the inductees was closed…how lame is that?! 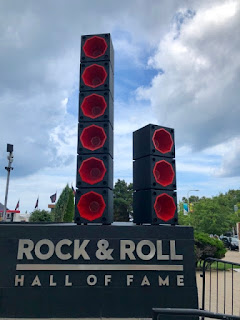 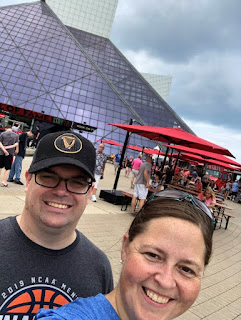 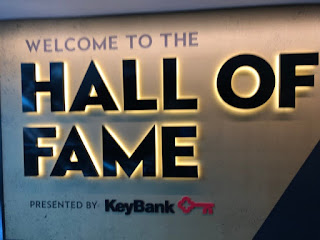 We stopped at the Winking Lizard. Eric had ribs and I had a burger. It was good food and not to badly priced. While we were there it started pouring!  We hung out for a while until I lightened up. It was weird as we walked back to the hotel it was raining on us and it was sunny. Ha!

After 4:30 Mass at the Cathedral (to pray I survive this race), we had some pizza at Guy’s Pizza Co. It was so cheap. Two large pieces of pizza and two cans of pop was $6. Amazing!  We went back to the hotel and crashed. We had an early wake up call!

Sunday…Uber saved the day
I’ll go into specifics about the race in another post but to sum it up, Uber saved the day. It stormed to start and got hot when we finished…best $30 a even spent was Ubering to and from the  race.

After that we showered and napped we enjoyed the hot tub. It felt so good. I was starving by this point and I wanted steak. Well there were no steak places with in walking distance of our hotel so Uber, again, saved the day. Uber Eats picked up my steak and Eric ribs and delivered it to our hotel…Awesome!

We walked around park at Playhouse Square and just relaxed in the beautiful night sky after a hot steamy day. We are such party poopers. Haha! 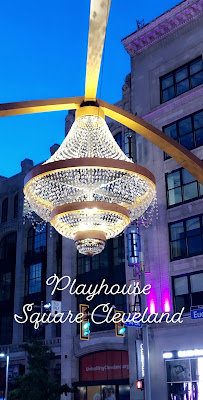 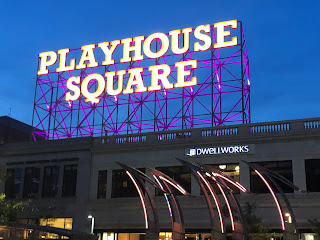 Monday…Lakeview Cemetery
Our flight left at 5:30 so we had plenty of time to do something in the morning. After stopping at the diner we found next door to the hotel for breakfast we hopped on the bus to the Lakeview Cemetery. Now you are probably thinking why are we going to a cemetery…well the answer is history. President Garfield has a monument there and I wanted to see it. We discovered some other interesting things in the park like the Wade Chapel. Wade Memorial Chapel, built in memory of Jeptha Wade, founder of The Western Union Telegraph Company and the first president of Lake View Cemetery, is listed on the National Register of Historic Places. It is one of the few interiors left in the world that was totally designed by Louis Comfort Tiffany and his studios. 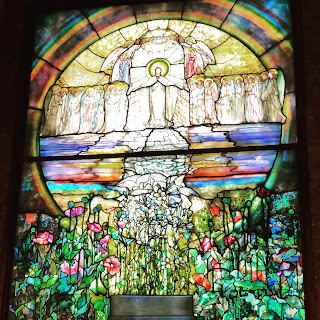 Posted by KimmerBee at 7:05 PM