We had a very tight schedule from the moment our plane touched down in Paris to getting on the train to Lyon. We had less than an hour if there were no flight delays. Of course, we were delayed 30 minutes…CRAP!  Thankfully I purchased the train tickets ahead of time so we didn’t have to waste time at the ticket counter and we didn’t check our bags so we didn’t have to wait for luggage.  We got off the plane and meandered our way from Terminal 1 to Terminal 2 at Charles de Gaulle airport which isn’t an easy task. Ran down the steps to the train station, looked briefly on the board for our track number. Let me tell you, that wasn’t very easy since the train didn’t say anything about Lyon. It listed a whole lot of cities and one was Brussels which made no sense to me. But we got on and before long we were on our way. I didn’t get much sleep on the plane so I napped a bit on the train. I was also hungry so I had a chicken Caesar salad sandwich and some chips. And in less than 2 hours we were in Lyon.

Cathy met us at the platform. She was beyond excited to see us. She was with her daughter Elodie. We got our hugs and kisses in and we were off to tour Lyon. We went to the old city and walked around the very narrow streets. We went into the two big churches, one of which we had to take a funicular up to. Very cool! The church on the hill had a fabulous view of the city. We took the funicular back down and had dinner at traditional Lyon restaurant. We drank wine, ate cheese, ate steak and had sorbet. So French! I even downed a few shots! It was a great start to our European vacation! 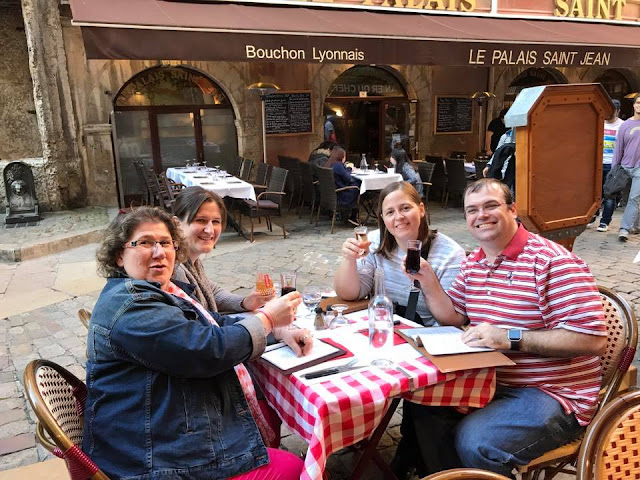