I did it! I completed my first triathlon!  I wasn’t last in any category. I call that a win! 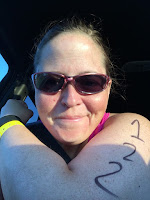 Packet Pickup
Saturday, Eric came with me to packet pick up and course meeting. There were not too many guys around but he wasn’t alone. I got my packet, got my body markings (#122) and got my super tight tank top. It is the largest size and it is a 3XL. Seriously, I’m not a 3XL in any clothes except for women’s running/biking clothes. FAT GIRLS DO THIS TOO! ARGH! The race is about empowering women…how are you “empowering women” when you make somebody like me feel terrible because I’m a 3XL? Jeez.

While at packet pickup, I set up my two transition areas. One by the Lifetime Fitness pool and one by school. The duathletes start at Lifetime Fitness, run to their bikes by the school and when they were done with the ride, they ran from the school to Lifetime. We swam at Lifetime, hopped on our bikes and dumped that off at the school and ran to Lifetime. I really does make sense. Anyways, I dumped my bike, shoes and helmet at the pool and my shoes and headband at the school. My shoes looked so lonely. In hindsight, I’m glad it didn’t rain overnight…I would have had wet shoes. LOL! Eric took me around the bike course one last time…man the hills! They seemed longer and higher this time than the last we drove it a month ago. I went home and relaxed…oh and at pizza.

Wake up!
The 5am wake up came very fast Sunday morning. I was excited but also nervous. I knew the swim was nothing, especially when they shortened it. And the mile was only 2 miles…I could walk if I had to. It was the 14 mile hilly bike ride that had me tied up in knots. I ate my toast and Nutella and drank some water. It was a long time until I hit the pool. I was nervous that wasn’t enough fuel. We drove over the race and Eric was nice enough to drop me off at the pool. I finished setting up my bike area. I have read a lot about triathlons and thankfully I felt fairly well prepared for this. I had my checklist, I put my stuff in what I thought was a logical order. My helmet, my socks, shoes, tank top, capris, etc.

Swim
I begrudgingly stripped down to my swimsuit. I hadn’t invested in tri clothes yet and since this was short swim/bike/run. I figured I can do it all in my swimsuit. I had practiced it a couple times so I knew I was ok. It was a bit chill in the morning and we lined up outside for the indoor swim. I stayed to the back of the line as I know my swim isn’t the best. Slowly but surely, every 5 seconds, one would jump in the pool. It was fun to watch the early swimmers go…they were so fast! There were people that misjudged their abilities as some people were getting bunched up. There was a ladder but everybody was just pulling themselves out of the water…EVERYBODY. Oh no, I didn’t practice this…I’m going to be a rolling whale at the end of the pool…oh God they are taking our pictures when we get out….this is going to be awful!

It wasn’t. I jumped in and started my swim. I was slower than in practice…I’m not sure why. I had issues going under the lines. I don’t know why. We swam down one length of the pool, under the line, swam down the next length, etc.… I passed a couple people but some woman flew past me and others. She definitely was in the wrong order. I got to the end of the pool and was so sad I had to get out I wanted to swim more. I really love swimming. My picture isn’t too bad: 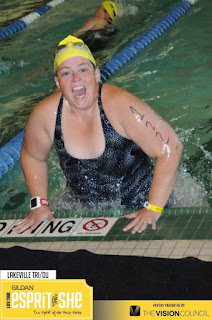 I’m a beast! My swim time was 3:41 (I said it was a short swim). I’m disappointed a bit in that time but with the going under the lines, I think it slowed me down. Oh well. I wasn’t the slowest swimmer, I was faster than 20 people. A win for me!

So I walked out to the bike area, the floor was very slippery at this point as 100+ swimmer had already walked out the bike. It was kind of sad to see only a few bikes remaining. But that isn’t a reflection of my bad swimming…I just lined up at the end for the swim. When I jumped in the pool there were only 7 people behind me.  I struggled to get my pants on. During my two practice runs, I wore different pants and didn’t struggle too much but the pants I picked for the race were a bit troublesome. I throw on my tank, my sunglasses, struggle to get socks on, my shoes were a breeze which is surprising because I usually have troubles with them. Popped my helmet on, grabbed my granola bar and I was off. Transition 1 time: 3:50 (I wasn’t the slowest in that either!)

Bike
The bike started with a couple of rights and some hills. I noticed that the duathlon was just starting their first run. They started 30 minutes behind us. It was nice because when we got the merge spot (we had to bike further), there were no duathletes to get in my way. The first mile was very slow but as Eric pointed out, I started my bike portion when I still had to walk my bike to the mounting line so I wasted a lot of time walking there and getting on. The first part of the ride was a lot of fun. Lots of down hills and some short uphills. I knew the first 3 miles was going to be fun. We got to Cedar Ave. and we had to bike on the shoulder. This wasn’t a closed course route so there were cars screaming past us at 55 mph. Cedar Ave. is a beast. It looked like a continuous uphill. I saw Eric around mile 5. He found me!  At mile 6, the first duathlete passed me. I’m kind of surprise it took her that long, they were cruising at 20+ mph! I was slow on the up hills and was relieved to hit the first “apex” of the race. There were three big uphills. This was the first one. I flew down the hill and I averaged 19.2 mph for mile 7. For me that is fast! I saw Eric two more times at miles 9 and 12. The last two miles were a struggle as they were mostly up hill. I struggled so much that my speed dropped to 6 mph. However, I’m proud I didn’t have to do the walk of shame. I passed a few people on the way into transition. They were slowing down, I sped up to over 20 mph. I really loved the bike ride overall except for the last 2 miles. I did well on the bike. My average pace was a bit slower than I was expecting at 14.7 mph. But it was a hard course and I beat out 52 out of the 138 triathletes.  That was my strongest event for sure! And I got some sweet pictures from it too! 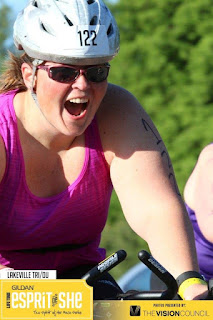 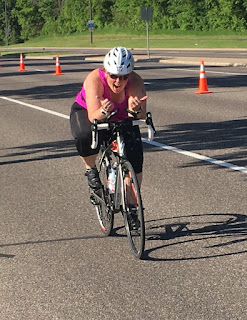 T2
I got to the dismount area and ran my bike into the transition area. I racked my bike, threw off my helmet, kicked off the bike shoes, pulled on the running shoes, slapped my headband on and drenched my head in water. I was hot by this point. The sun was out and it was 68 degrees with no breezy. I don’t do well running in heat. And on top of that my legs were like Jell-O from the hour on the bike. Transition 2 time was 2:29.

Run
The start was a bit slow going. But thankfully most of the first mile was downhill. The thing that motivated me was the really fast duathletes had caught up to me and were running fast so I felt silly walking when they were running. It is a mental thing. I ran the first mile in 12:33. Not bad. I was happy with that. The second mile had a lot of uphills and slowed down a lot and walked more. I was tired by this point and hot. I got near the finisher chute and I went after it. I finished strong my run pace was 12:25 (I think this is wrong). The run was my worst event, I only beat 16 people on the run. I find that funny since that is the sport I do the most! My overall time was 1:31:38. I finished 109 out of 138. I was very proud of my accomplishment and can’t wait to do another triathlon. 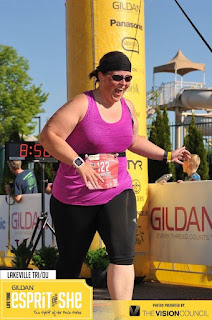 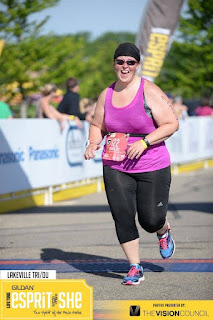 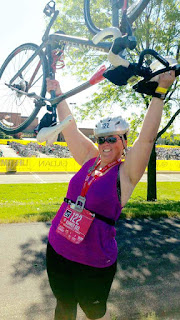 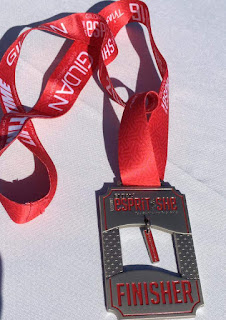 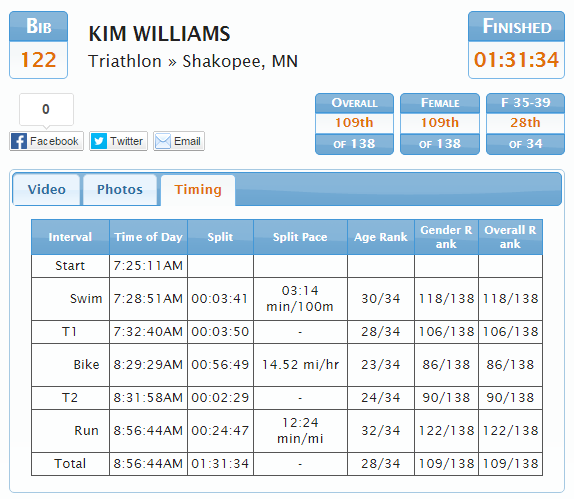