Well I had an interesting April Fools Day…

I did a bit of research at work on the Nissan Altima. My coworker has one and loves it. I rented one a few years ago and it handled the mountain climb to Pahrump really well so I thought what the heck, let’s check them out. The Altima was on my short list of potential new cars. Also on the list were the Chrysler 200 (looks awesome but doesn’t drive awesome), the Ford Fusion….the car I almost bought 5 years ago and the Ford Taurus (because it has a V6).

I test drove the Ford Fusion at the Twin Cities Auto Show. It is a nice car and I still like the looks. It was number one on my list for a long time. Among the nicest features is the keypad entry. I love that feature on our Escape. I had done a ton of research on the car and all the options and I thought for sure I was going to get one. But I waited.

A couple weeks ago, on a whim we test drove the Chrysler 200. Even though I like the look of the car and the interior is nice, it made me feel very claustrophobic. It was almost like I was sitting in a cramped cockpit. It failed my test.

Fast forward to April Fool’s Day. I had some down time at work and decided to do a quick search of the Nissan Altima. I found that you can go 700 miles on a tank of gas. We drive a lot and seem to fill up the tank twice a week so the thought that we could go a couple weeks without filling up was very intriguing. I actually sent an email to the internet sales person. After work, Eric picked me up like normal and asked what I wanted to do and I said lets go to Eden Prairie Nissan. Here is the April Fool's Joke...I told Eric I wasn't going to buy...ha!

We got to the lot and I saw this very nice silver Altima with a sunroof by the front door. I took a quick look and jokingly told Eric, “I want this one.” I was also confused because I searched all the silver cars on their website and didn’t find a single one with a sunroof so I was confused and thought for sure this car was way out of my price range.

We walked in and met Kirk. Like a good salesperson, he asked what I had to have and what I wanted. Well in this cold tundra, I said I had to have remote start. That was really my only “had to have.” Well that options meant I had to get the SV trim level, the middle of the road trim. As far as the “wants” of course it was sunroof, heated leather seats and a back-up camera. So Kirk went to get the keys for an SV model...well he sat down and said that is the key to a 2016 Altima SV. But he said, I want you to check out this car first. So he took me over to a car in the show room that had everything I wanted. It was an Altima SL...the best trim level. He told me that it was one of two identical 2015 models left and the price was slashed and was cheaper than a 2016 Altima SV. Wouldn't you know it, the other 2015 was the one I looked at outside!! I knew then, I was buying a car...I was buying the car I told Eric I wanted when we got there.

We took it on a test drive where we tried a mixture of city streets and highway. I was so impressed. The interior is well laid out, I don’t feel cramped. The car also was pretty zippy for 4 cylinder. Coming from my Grand Prix GT with the big 3.8 L V6 engine, I’m very picky about my pick up and go. This car passed that test. We got back to the dealer and Kirk said, is this your car and I said I think so. My credit was good enough they offered me 0% for 72 months. And so it goes...I’m a proud owner of a 2015 Nissan Altima SL. I have wanted a silver car for 20 years and I finally got one...I’m in love! 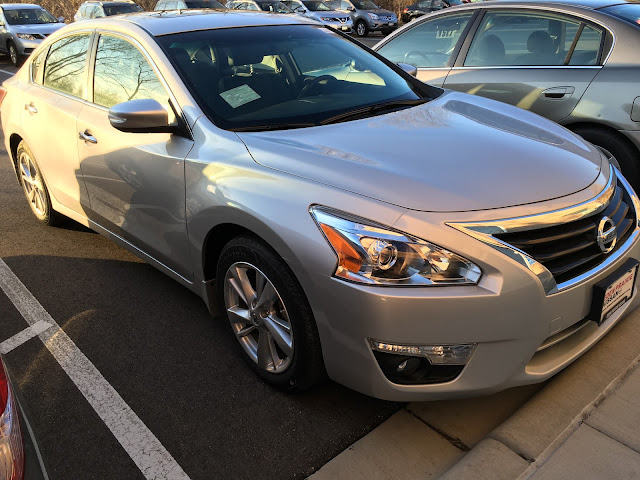 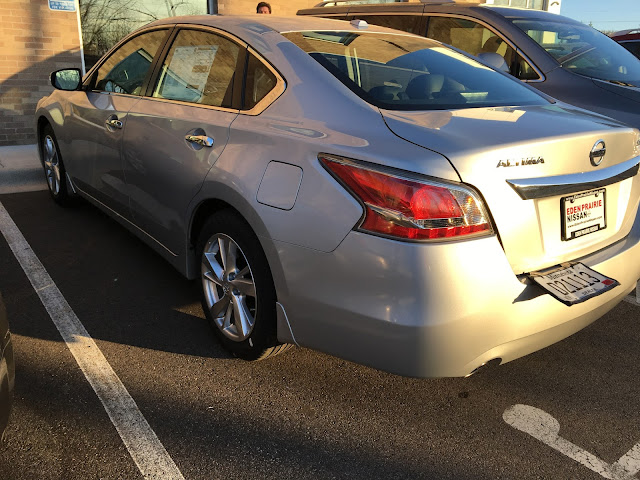 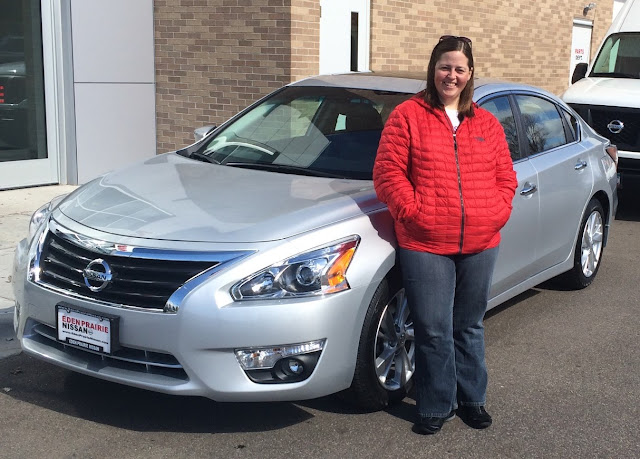