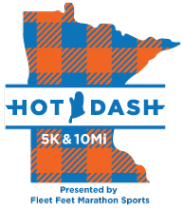 There is not more demoralizing than waking up on race morning and seeing a fresh coat of snow. Yep, it snowed Friday night into Saturday morning. It was the snow plow that woke Eric up. What makes it worse is the fact that exactly a week ago our race was sunny, beautiful and warm. I had to trade in my tank top and capris for long sleeve layers and long running tights. Ugh! On top of the dismal start, the snow and ice caused accidents everywhere. It was a slow drive into Minneapolis. 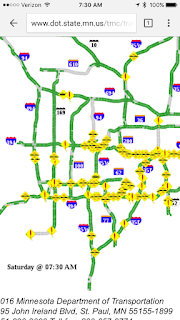 The Start
As we were walking to the start, I saw Jennie, one of my coworkers. We stood by each other and chatted. Eric made a beeline to the porta potties which were all the way back by the 10 miles start (we had different starting points). I eventually saw him in the crowd and we jumped into the line. This race was a free for all, no “pace” groups. As I’ve mentioned many times before this drives me crazy because people who walk the race start up front and then everybody has to run around them. Oh well. The start wasn’t that exciting. I had a great pace starting off with. I was averaging just below an 11 minute pace and I felt great. I was hopefully this was going to be a great race. Just before the end of mile one is the Plymouth Ave. Bridge. I hate this bridge! I didn’t walk up the steep long incline up the bridge but my pace plummeted and my first mile came in at 11:32. Oh darn!

The Middle
Once we past mile one, the fun began. We took a right onto West River Parkway. It was a sheet of ice. It was so slippery. People were falling all over the place. There really was nowhere to go so “shuffle steps” was the only way to proceed. It slowed me a down a bit but the fact I managed to get mile two in under 12 minutes was amazing. The ice was big blow to my hopes of a fast race. Mile 2 was 11:55. (This is 27 seconds faster than the Valentine’s Day 5K mile 2 and there was no ice).

The Finish
We turned off of West River Parkway and onto the Stone Arch Bridge. I’m not a big fan of this bridge. I should restate that I love this bridge; it is very cool…to walk across. The layer of snow made the bridge a little slick. The worst part is in the center of the bridge is a medal drainage plate. It runs the entire bridge. It had snow on it which means you step on it, you end up on your ass. So passing people on the bridge became very difficult as it usually required a stop on the drainage plate. Anyways, it made for an interesting mile 3. After the bridge we had a half a mile on old cobblestone. As you can imagine, with the snow, it was slick. Not as bad as the other road but still not fun running ground. Mile 3 was a smidge faster than mile 2 at 11:52. I tried to sprint across the finish line but it was much slower than I wanted. Sadly my 5K wasn’t super-fast. I was just marginally faster than the last one. But this race was bit long so my overall pace was the best I’ve had since August so I call that a win! 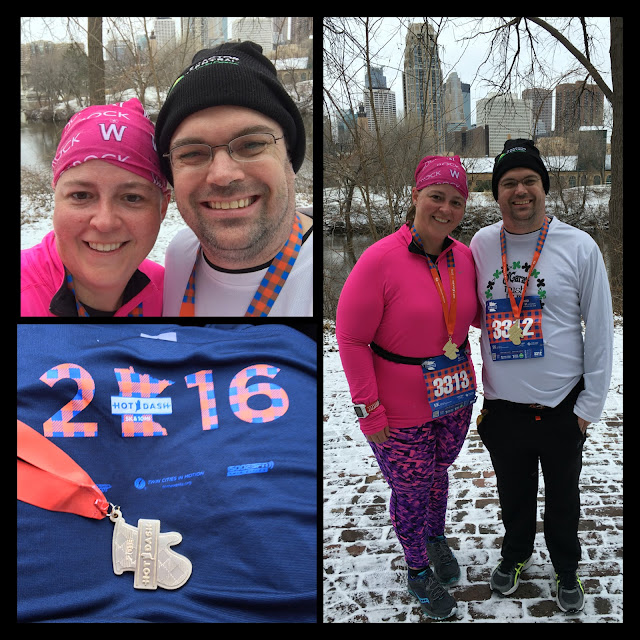 Posted by KimmerBee at 9:55 AM