The Start
The start was right by the Union Depot. The temperature was really nice at 52 degrees. The sun was shining and there was a slight breeze. As usually, I overdressed. I should have left the long sleeves in the car. The start line was under a bridge. What a weird start line. Thankfully I’m slow so I didn’t have the problem of my watch not connecting to GPS like the fast/elite runners that were queued up under the bridge. Fail on Team Ortho’s part. You cross the start line and make an immediate left on to Shepard Road. I have no idea when they did it that way. You would think they would have lined us up on Shepard Road but nope…whatever! We ran 3/4 of a mile east and had to turn around in the median which was full of sand? What the heck was that? The first mile was great even with the sand. I ran it straight and managed a 12:12. The other fail on Team Ortho’s part was the mile markers were way off. By the time I hit their mile 1 sign I was already at 1.1! It got worse as the race went on. I was so hot when I hit the mile marker I had to walk and take off my long sleeves. It was more difficult than usually because I was wearing my water belt. Anyway, my slowdown during mile 2 makes sense. Mile 2 came in at 12:35.

The First Intervals
I was starting to feel the lag after mile 2 so I decided now was a great time to jump into the intervals. I decided to start with 2 minute run, 30 seconds walk. There were a bunch of us doing intervals so that was cool. I know that intervals are not a bad thing as mile 3 was almost as fast as mile 1 at 12:17. I continued with this interval during miles 4 and 5. Mile 4 was a bit slower than mile 3 because there was a water stop. Now normally that wouldn’t be a big deal except I was choking on the water. I was trying to drink it fast and of course it went down the wrong “tube” and I was coughing like crazy. So I had to walk a bit longer to get over the choking. Mile 5 was slower too. I was really struggling and I’m not sure why. It came in at 13:09 which isn’t horrible but it was slower than I would like.

The Second Intervals
After mile 5, I struggled to run the 2 minute intervals. I really need to go for longer runs! So I switch to 1 minute run/1 minute walk (1:1). A lady was doing this interval earlier in the race and flew past me. The thing was when she was running, she wasn’t running that much faster than me. But when I started to fade, she kept going strong. So I thought what the heck, how can that be? Well I had almost 3 miles left to go, so I said screw it, let’s try 1:1. Mile 6 was a disaster. There is a long gradual up hill. On top of that this part of the course was an out and back so there was a hoard of people running at me and the runners that were running at me for some reason thought they should be as far over to their left (my right) as they could be. Well I was running there too. Boy did that piss me off! My mile 6 time was 13:50. I was very irritated with myself but I carried on with the 1:1 ratio.  Mile 7 was great. When I was running, I looked forward to the walk, when I was walking I was looking forward to my next run segment. I felt great again. My time wasn’t super-fast at 13:00 but it was faster than Mile 5 and 6 so that made me happy. Maybe this 1:1 isn’t such a bad idea!

The Finish
After my great mile 7, I slowed down for some reason during mile 8. It wasn’t as bad as mile 6 but it wasn’t great. Like I said before, I need to go on more long runs! I don’t’ remember much of mile 8. When I got the mile 8 marker my watch said 8.2. The course was long!  Mile 8 was 13:26. I had just under a mile to go. There was this annoying women in the crowd who looked at me and said you need to start running now. You are almost there. I was ready to punch her in the nose. I was during my “walk” segment. She kept walking along with me and telling me “you need to run now.” She seriously pissed me off. I didn’t even acknowledge her. I started my next run portion and basically ran to the finish. The total distance was 8.85 miles (that was .15 longer than a 14K) and my time was 1:54.05. I was glad to be done. I got my medal, met Eric and walked to the Union Depot for the food. I’m not completely happy with my time but I wasn’t prepared as I should have been so I’m not surprised. 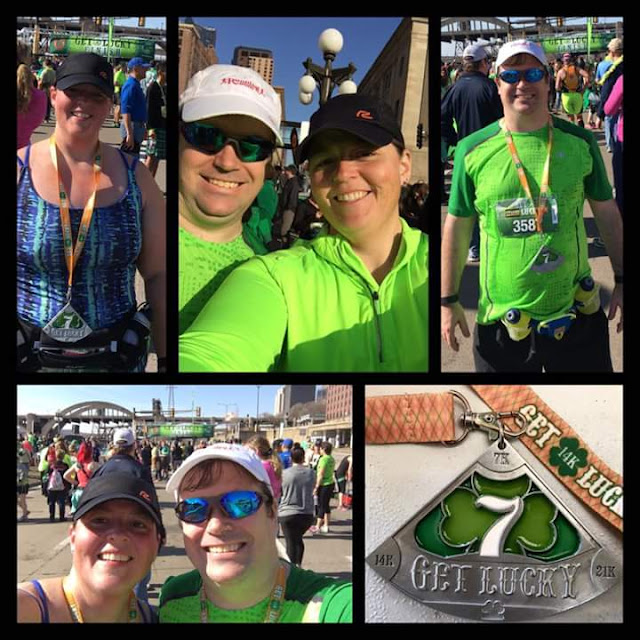 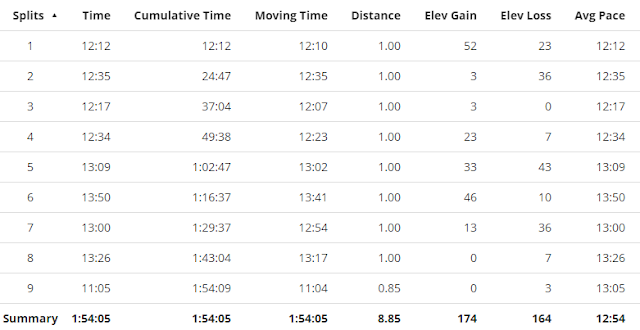 Posted by KimmerBee at 9:19 AM