Here it is the Tuesday after Labor Day and I haven’t written in a while. I’m not sure how I forgot to write about the State Fair!  I’m so bad! Well, this past Saturday my mom, Mike, Eric and I went to the “Great Minnesota Get Together” also known as the Minnesota State Fair. I have talked about the state fair many times. It is really one of my favorite things about summer. The only bad thing is it signals the end of summer. :(

Hop the Bus
We left the house a little before 8 am to get to the State Fair bus. It is such a big deal that most of the Twin Cities park and ride lots have State Fair bus service. It is really the easiest and cheapest way to get to the fair. You park your car, hop on the bus and it drops you off basically by an entrance…awesome!

Milk and Cookies
The morning was rainy, hot and humid. Not the best state fair weather but what can you do? I grabbed a couple of umbrellas but we never used them. The first stop was Sweet Martha’s cookies and from there you make a beeline to the All-You-Can-Drink Milk for $2. They doubled the price this year! The milk booth doesn’t open until 9am. Big mistake on their part since Sweet Martha’s opens at 7:30. That is a solid hour and half of missed sales. We waited for about 5 minutes for the milk to open and I was standing under an awning as it was raining pretty hard. The window opens up and I get Eric’s milk. Well I managed to piss off a couple people who think I cut the line. I’m not sure how I did that as I was standing right there the whole time, but whatever…and not only that I knew exactly what I wanted, one white milk. When I left they were still grumbling that I cut in front of them but the best part was they still didn’t know what they wanted! “Do we want 2 white and one chocolate, oh no wait, 2 chocolate and one white.” Give me a break people! Trees, Apples, Pumpkins and Beer
We walked through the Horticulture/Agriculture building. One wing had Minnesota Grown Christmas trees; they were amazing and the smell…ah. We walked around the apples and the vegetables. The largest pumpkin was 1,400 pounds. It weighed 300 pounds more than this year’s largest boar! Another wing had Minnesota brewed beers. Mom, Mike and Eric shared a flight of 4 different beers.

The Needle, Tractors and Apple Dumpling
We left Mom at Leinie’s Lodge/stage and went up the Needle Ride. I’m not sure what it is called but it goes up and down this needle and get 360 view of the surround area. Very cool! We went to the Education building and Machinery hill. Of course Mike knows somebody working the John Deere tent. Everywhere we go, he finds somebody he knows. Crazy! Somewhere along the way we found the best apple dumpling ever. I was so delicious! 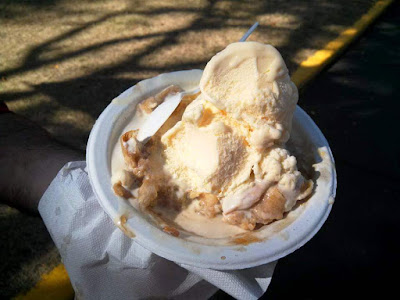 The Willis Clan, Cheese Curds and Pineapple
We eventually made our way back to Mom and watch The Willis Clan perform. They were really good. We watched the rest of the first performance and when they had a 30 minute break, we headed to the food building for lunch. I went straight to the cheese curds. Eric got the 1919 Rootbeer, Mike got a wrap (of course!) and Mom got a drink in a pineapple. OMG was that good. It was like a thick Pina Colada without the alcohol with chunks of Pineapple.  We went back to the Leinie’s for the second performance of The Willis Clan. 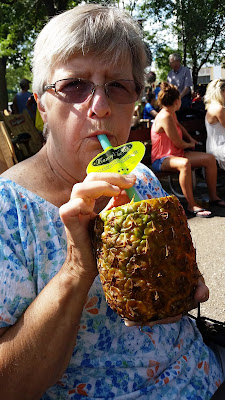 The Skyride, Blue Grass and Shopping
After the last performance we took the Skyride to the other side of the fairgrounds. There was a bluegrass show at the Schell’s amphitheater (all the stages/amphitheater seemed to be named after beer!). We didn’t stick around there very long, after the great performance from The Willis Clan these guys were just not that great. I tried the new “Snicker Salad” from the Blue Barn. It was pretty good but expensive. We walked around the shopping area of the Grandstand before eventually making our way back to the bus. It was a fun-filled, food-filled day.