This past weekend was busy! Friday after work, we had to pick up our race packets in Eden Prairie and rush home. Eric was refereeing games at the Shakopee Cup. We got home and quickly changed clothes and I dropped him off at the field on my way to the Spring Lake Regional Park for a run. It wasn’t my best run but I was suffering from a tight chest…I think I suffered bronchitis again. I managed 4 miles on the hilly course before I headed home. Around 10:30 I picked Eric up from his third soccer game of the night.

Valleyfair
Eric left early Saturday morning for one soccer game. DJ, Beth and Abbie came up and we went to Valleyfair. Our race packet included 2 tickets to Valleyfair. Since I have a season pass, I gave the two tickets to DJ and Abbie and we bought on for Beth. I managed to get on 3 rides (Monster, Corkscrew and Tilt-a-Whirl) before Eric called that he was on his way to pick me up.

Twins Game
It was Dairy Queen Hat Day at the Twins Game. It isn’t a bad looking hat. 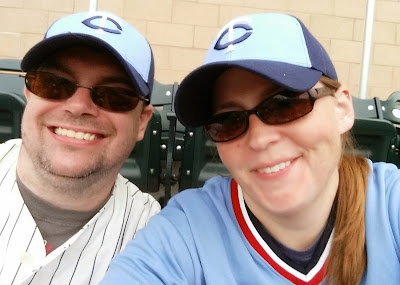 The irony is the hat colors match the Tampa Bay Rays team colors which is who we were playing. Oops! We watch most of the Twins game. It was a beautiful day for a game. Not too hot, not too cold, a little breeze. We left after the 7th inning stretch so we could relax at home a bit before I went back to Valleyfair and Eric went back to the soccer fields. We listened to crowd roar as we walked to our car…we missed it…the Twins won!

A Non-Water Ride
DJ, Abbie and I went back to Valleyfair…Beth sat this time out. DJ decided to get season passes…it was a nightmare to get it all figured out because the woman in the ticket booth didn’t know what she was doing. And then her printer ran out of paper and we had to go visit guest services and almost an hour later, they had their season passes. We went into the park and hit a few rides. I had my first Cheese on a Stick. I have one each year so I can remind myself why I don’t by them all year long but this one was actually very good! Darn…I want another one! Just before 9pm we jumped on the Monster again. There was lightning sighted so all tall rides had to stop. DJ and Abbie got on right before me. But we were on the same “ride.” Well it started to sprinkle a bit. The let the first group off, then the second group…the one with DJ and Abbie and then as they were loading for the next one the downpour hit. All the people who were just loaded were getting taken off. The other 4 of us stuck on top were like what the heck. Then we waited. By this time it was pouring and DJ and Abbie had sprinted for cover. I was stuck on the top of Monster with nothing to cover me. My “car” was facing up so the rain started to collect where I sat. It was cold and miserable. They left us there for maybe a couple minutes. Before Anthony, the life guard by day, saved us. He said your ride just became a water ride but don’t work I’m a life guard, I’ll save you. Apparently the policy is not to move a ride when it is raining and lightning…smart right? So we were stuck. But as soon as the supervisor left, Anthony brought us down…he rushed us off, I’m sure because he didn’t want to get in trouble. I was soaked. Thankfully DJ had a sleeping bag in her car that I could wrap around myself to stay warm.  I was so glad to get home!

Sunday
After the 10K race (previous post) we took a quick shower and headed down to Amboy for Danielle and Bradley’s wedding shower in the church basement. It was nice to see the family again met some of the people who to the church. It was a nice brunch. We went to Bradley’s parents’ house afterwards and chatted for a while before we headed back home. It was a long busy weekend.