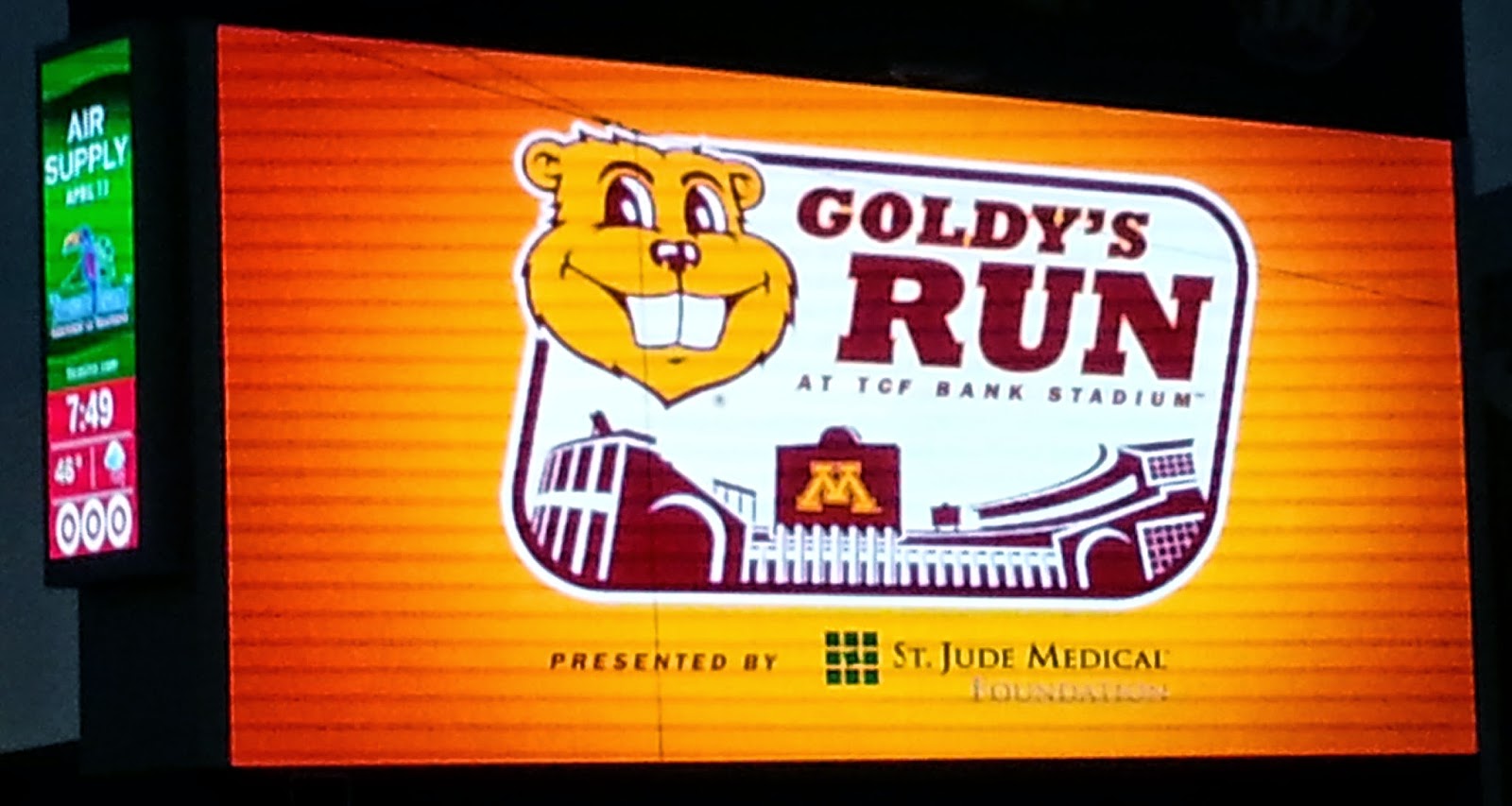 Another race, another miserable day. I am cursed. It wasn’t the most unpleasant run, how can anything beat the below zero races? But it was rainy and windy and those two elements together made it cold.  The race started right outside the Gopher’s football stadium. Our warm up area was the concourses of the stadium. We tried to walk around Goldy’s Locker Room shop but there so many people in there trying to warm up and stay dry that you couldn’t really walk around. We went up into the concourses to use the bathroom and I ran into my friend, Amy. Amy is the crazy Ironman woman. She runs tons, bikes tons and swims tons. She has done numerous marathons and half Ironmans and last year completed her first full ironman. She started swimming before I woke up and the only reason I stayed awake was to see her finish. She worked out more that day than I was awake! I can’t believe that I ran into her considering there were over 5,000 people there.

Rain!
Right before the 10 mile races started there was a major downpour. Yuck!  They started and it was still raining pretty hard.  How miserable! We eventually made our way to the start line; we stayed under cover for as long as we could. By the time we started it was just drizzling. I started out very strong and had to dodge some strollers…there were a lot of them.  Most of the first mile was just straight down University Ave. The strollers still got in my way and of course the people who sprint the first half mile and then barely are walking the next half mile got in my way. I did a lot of aggressive moves that first mile. The crowd spread out a bit and I was able to get into my stride. The first mile was very fast for me. I couldn’t believe that I got it under 11:30. After the first mile there were a lot of turns. Check out the map under the splits. We turned every block almost. But that was ok because it was a run through campus and the U of M is such a cool campus, it was nice run. Mile 2 was my slowest, of course, I had a shoe lace to tie somewhere in there. Eric had to tie his twice. I’m not sure what the problem was with our shoes! The last mile was a struggle. I’m not sure how I got it back down to 11:32, it felt a lot slower. Again I was dodging walkers, apparently people do understand race etiquette…get out of the way! The stadium eventually came back into view, that was exciting, but we had to run around it to get into the chute to get onto the field. 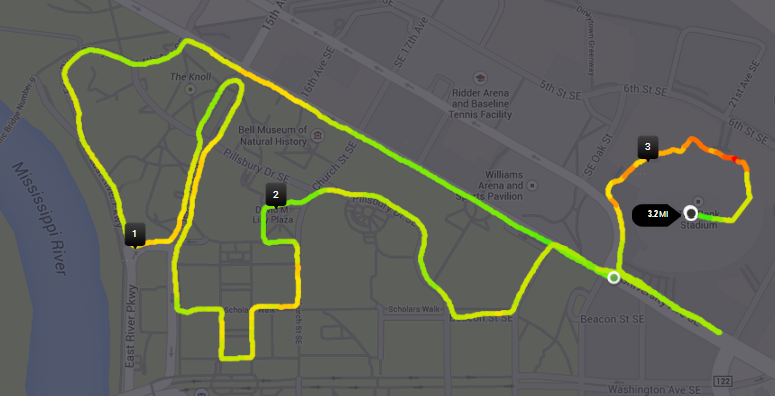 The Finish
The finish was on the 50 yard line. It was really an awesome finish, you run through the players tunnel and onto the field and you are on the big screen as you cross the finish…well you are supposed to be but some woman in front of me was hogging the whole freaking screen. I eventually saw me. Eric took off on me again, he claims he thought I was behind him the whole way…yea right! There were over 100 people that finished between us! We got our medal (very cool) and some water. I didn’t realize the food was up on the concourse. There wasn’t any signs saying where the food was, I thought we only got water. The first 10 mile runners were also in. The first 10 mile runner finished around the same time we finished the 5K. They had a 15 minute head start but that really puts into perspective how slow I am! We walked to the car to change into some dry clothes and get some money for the store.  We got back and found the food and I saw Amy finish the 10 mile race on the big screen. I caught up with her on the field. It was a great run.  My time was 37:37, my fastest 5K ever. 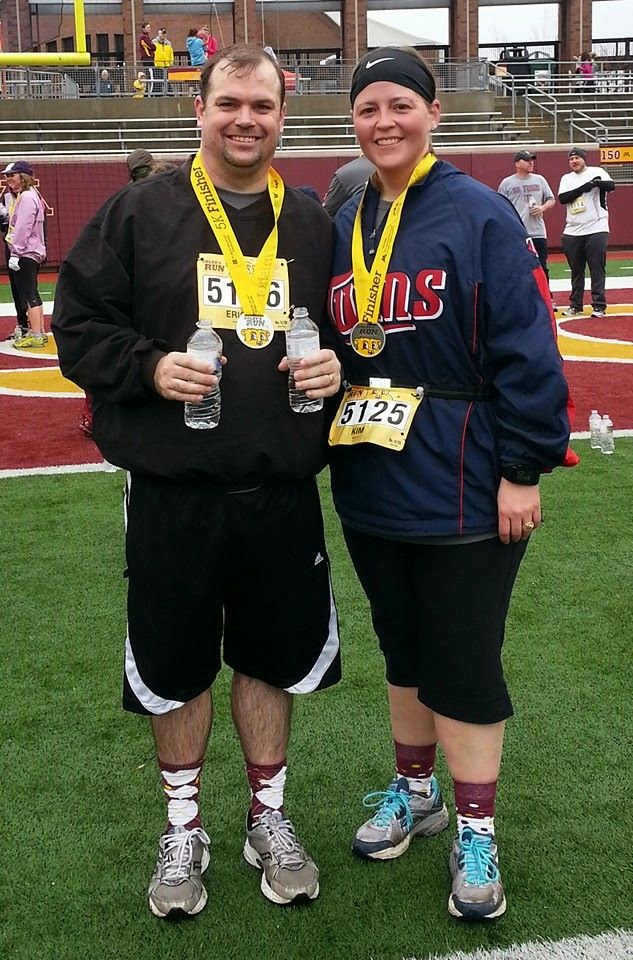 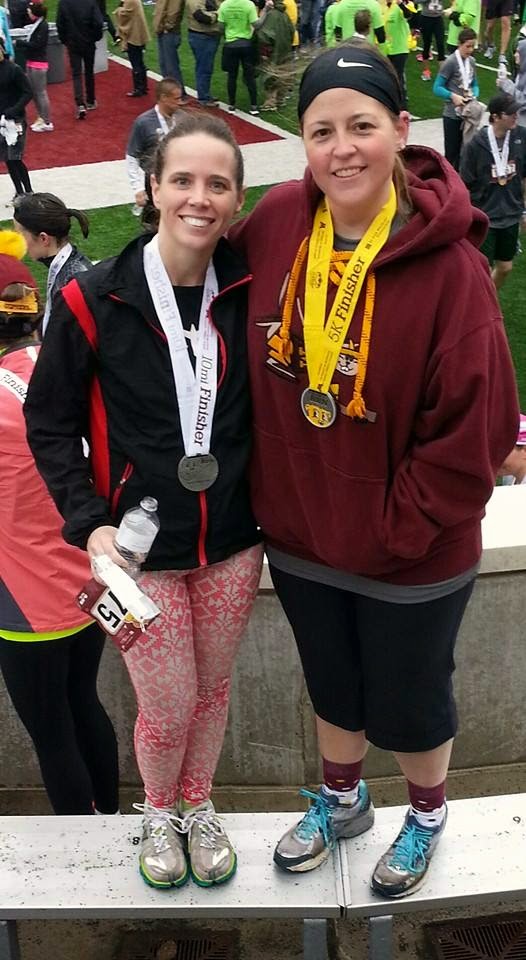 The Parking
I was so cold after wards I was so excited to put on the seat warmers on the car. We sat for almost an hour in the parking lot trying to get out. Parking at the U of M is notorious. After a Gopher Football game it took us almost 2 hours to get out of the lot. We just hung out in the car and warmed up. Eventually we got out and made our way home.

I had an off week. I ran Sunday in Rapid, Monday we biked a short 5 mile ride, Tuesday I had a double header in volleyball so no other activites, Wednesday I got back to swimming, Thursday I didn't run on because of splitting headache and Friday I wanted to rest before the Goldy's Run.