The 5am Wake Up Call

Ok, Swirl, I get it. The birds are making noise outside so you think it is time we wake up. BUT it is 5am. I still have another hour of sleep so STOP MEOWING!  And it wasn’t the ordinary meowing, it was that LOUD, deep, whiny meow with his friendly bee in his mouth so it sounds really gargled.  It almost sounds like a crying baby.

Swirl has a habit of doing this in the evening.  He constantly meows as he brings his bee upstairs.  He doesn’t stop meowing until he comes into our bedroom and we say “Good job Swirl.” Then he spits out the bee on the floor (directly in footpath to the bathroom so I get to step on it in the middle of the night). If we don’t say “good job Swirl,” he continues to meow. It doesn’t matter where in the house the bee is at the time he starts this process.  If it is already in our bedroom, he will come get it, go downstairs and start the long, loud trek up the steps to the bedroom.

Swirl really loves his bee. It has been all over the house. On the bed, in the bathroom, on the steps, in the living room, on his recliner.  And it is always moving around the house, but we never see him move it. It is really weird.  The bee could be on the floor in the living room when we go for our evening walk and by the time we come home 30 minutes later it will be in some other completely different place.  He doesn’t like to move it when we are around…except for 10pm at night.  And when I hear him coming up the steps and peak outside to see him, he spits it out turns his head around and acts like nothing just happened.  “Nothing to see here.” We aren’t really sure if he always meows like this when he is moving it around when we aren’t home. Or if that meowing is just for our “benefit.”

I’m hoping this morning was just a one off and he won’t be doing it again, but if this becomes a habit, I might have to take the bee away at night.

What a goofy cat!  Nonetheless, he is our Swirl. 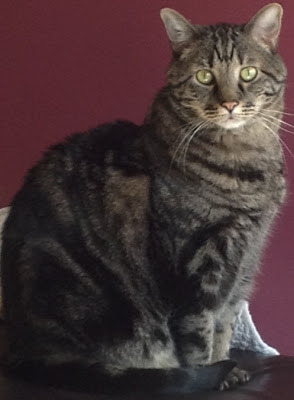