I love long weekends, but coming back to work is tough. I don’t want to get out of bed, I want to sleep some more.  Why do they have to go by so fast?  ARGH!

This weekend was busy.  Saturday I went to the local Laundromat to wash my oversized comforters. Interesting experience…interesting clientele…but I won’t go into that.  I also donated a bunch of stuff to Goodwill. I had a clean out.  After that we went out to lunch with Greg and Celeste and did some shopping. I got a nice frame for my new painting for $10 at Michael’s. It was in a bin outside, originally priced at $60.  So I got a good deal! The afternoon we spent shopping for things for the house and of course a visit to Kohl’s. I’m addicted to that store. But I got $20 in Kohl’s cash that I need to use soon! We finished the night with a walk.

Sunday was Eric’s running test for soccer in Eden Prairie. He passed! It was a very windy, cold morning which is typical for his test. Every year it is cold, windy.  This year it didn’t snow so that is good. I few years ago it was snowing. After his test we hurried down Hwy. 35 in Wisconsin to Arcadia for the Broiler-Dairy Days Parade.  It was cold and wet.  It rained for most of the parade. Mike was in the parade pulling some of the mini tractors that were pulling in the evening.  I was disappointed there were only 3 bands.  The Arcadia HS, Arcadia MS and the Winona HS.  The middle school band looked better and sounded better then the high school band.  Very sad!

After the parade we headed up to the Pavilion for some charcoal chicken.  Yum!  Since Mike was the organizer of the tractor pull we got a front seat spot in the car. It was so nice to be able to sit in the car where it was warm and a sound buffer for the really loud tractors.  It was a good afternoon.  After the tractor pull was done we stopped for a pizza and went to Mom’s place. The day of being outside really made us tired, we went to bed before 10pm! 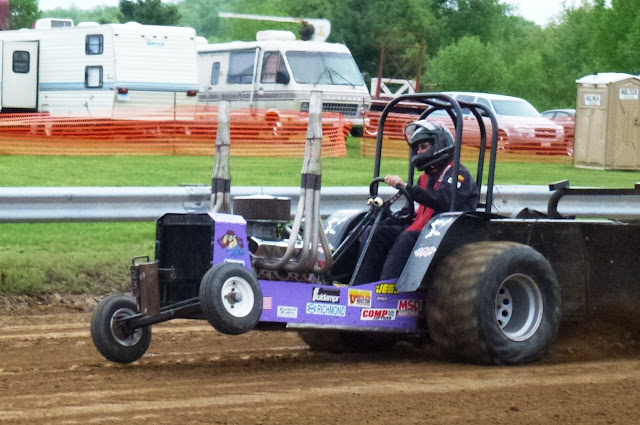 Yesterday we went to Red Lobster for lunch and then over to Grace’s house. It was her 80th birthday.  We stayed for a while. I was able to beat the level she was stuck on in Candy Crush.  Actually I did so well she was number one of all her friends.  Eric had to share it and put, “I’m better than Kim.” Nice!  The drive home was very chaotic. There was a lot of traffic and it rained most of the way and people were driving stupid.  I was so glad to finally get home.  It was good weekend.  Now I have the week ahead to look forward to.  And only 3 days of work. :)
Posted by KimmerBee at 9:11 AM