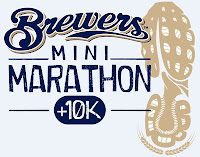 It has been just over a month since our last race so I was feeling a little nervous in the beginning. I knew I could cover the distance it was a matter of how fast. I’ve been in a major running funk. Since the last half marathon, my pace has been slow and the longest I ran was 4 miles. Not great training for 10K, let alone a half that I have in two weeks. (Yikes!)

The Pre-Start
I woke up around 5:30am, before my alarm, and started my usually race morning routine. I quickly got dressed, filled my water bottles, ate two pieces of toast with Nutella and just tried to envision the race. I really didn’t think about anything other than it was too early in the morning. Ha! Because of all the street closures, we had to get to park before 6:30. It was nice to use indoor bathrooms before the start in Miller Park. Eric and I ran the 10K which started at 7am, 15 minutes before the half and 5K. Mike and Linda did the 5K. Eric was in Corral A, I was in Corral C. Surprisingly that was not the last corral! Yay me!
The Start
I stayed to the back of Corral C just because I didn’t feel worthy of being in a corral that wasn’t the last one. The time I submitted was Valleyfair’s time in May when I was much faster. The start was around the stadium and up a little hill on Fredrick Miller Way. Once we got the end of the parking lots, we turned left. I ran all of the first 2 miles with some guy named Tom. He was from Milwaukee, his wife was from Edina originally. He was older, he was in the 70+ category. He had been running for over 35 years and has done 90 marathons. Yep, 90! There you go Phil, beat him! His fastest was 4:01 his slowest was 5:59. He has ran both the Twin Cities and Grandma’s marthons a couple times. He was interesting to talk to. I had to walk for a bit after mile 2 so I let him go. But he was never too far away. We passed each other multiple times on the course. As we were running down the finishing chute, I had enough oomph to sprint him and I said we made it.  During Mile 2 we ran past the Miller Brewing company. So that was cool. The route wasn’t that exciting.
The Middle
Mile 3 and 4 were just tough. We ran along State St for most of these miles. There were some spectators out but they were few and far between. I caught up to Lucia. She was very short. We ran for a bit together but eventually I left her. It started to rain and then pour. Mile 3 was all about the rain. I was soaked. I don’t mind running in rain, I actually enjoy it but some of this hurt it was so hard. Mile 4 was all about the hills! For only being a 10K there was 215 feet of gain and most of it was during mile 4. I was so happy to get to the top of the hills.
The Finish
Mile 5 was great. It was all downhill. I like downhills! During this mile, I walked a bit and Lucia came up from behind and yelled at me to get going. She "kicked me in the butt." She must have caught up to me because of my long walk up a big hill during mile 4. I also ran into my buddy Tom. Like I said before, we kept meeting each other. Mile 6 was cruel. You could see the stadium most of the way and when you think you are getting close they throw a loop around the parking lot. I was struggle to run this mile. I had some water at the stop and kept going.  Eventually we entered Miller Park and ran down the third baseline, around home plate and out the first baseline. There were people in the stadium cheering us on and we got to see ourselves on the big screen. We ran out of the stadium...why we didn't finish in the stadium is beyond me...to the finish line. It was an uphill finish which is so cruel!  Overall my time was slow, 1:21:29...but considering I haven't trained for this race I'm happy I ran most of it. 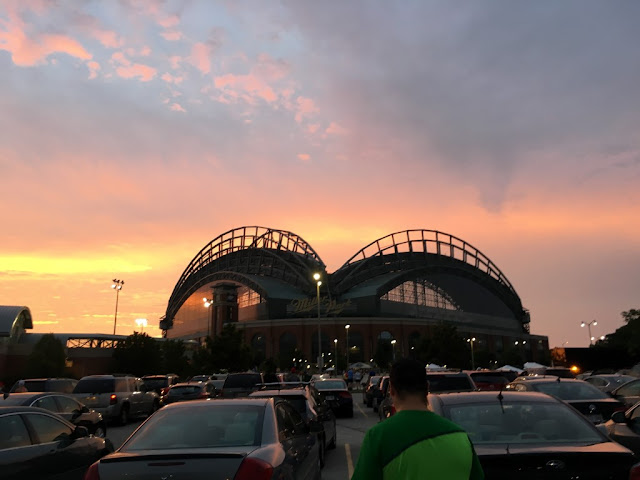 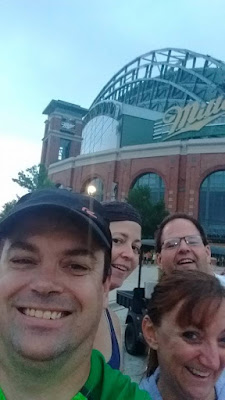 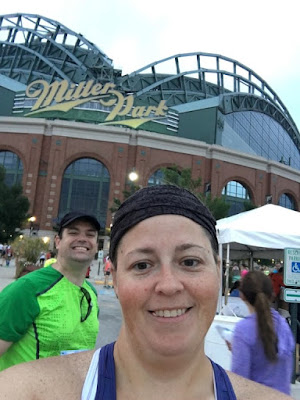 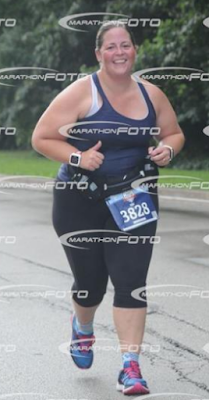 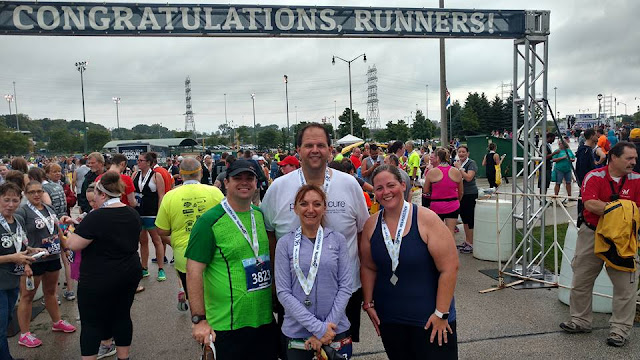 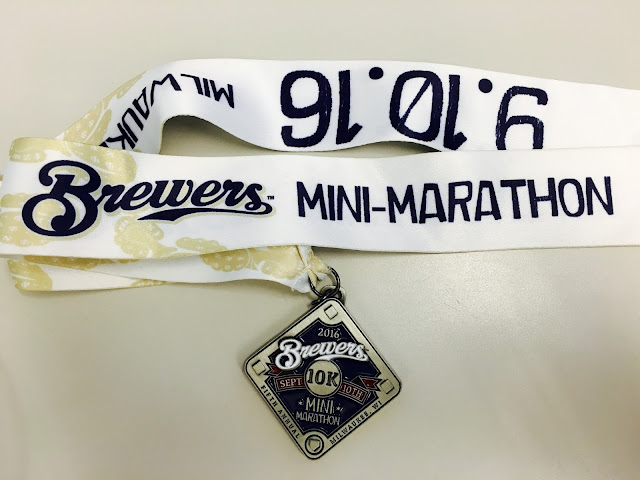 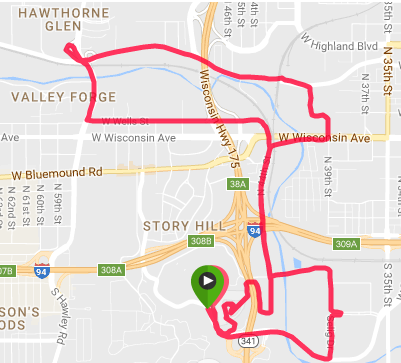 Posted by KimmerBee at 8:22 PM