I can sum up this race in three words: HOT, HUMID & HILLS. 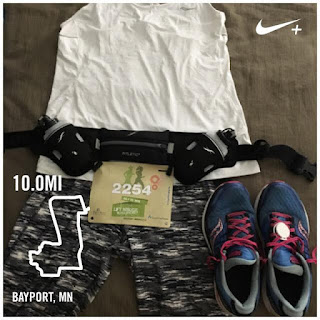 I’m a wimp. At the last minute, I booked a hotel room in Stillwater so I wouldn’t have to wake up super early for this race. It really wasn’t necessary. The race was only an hour from home, so we could easily have gotten up early and gone but I wanted to go to packet pick up Friday night and drive the course beforehand so I knew what to expect. Also I wanted to relax the night before and get a good night sleep. Which I did for the most part except for the rude loud neighbors at 1am. I eventually went back to sleep but I was plotting in my awaken daze to get even with them. But I did not. My plan to sleep in didn’t work as I was up at 6 something anyways. But at least I didn’t have to stress of driving an hour to the race start that I was unfamiliar with. I had two pieces of toast and some Nutella, my race day ritual.

The Beginning
I knew going in this was a small race and a near last place finish was a strong possibility. With the hot, humid weather, I knew that there would be some people who would not show up. It was a very small field, smaller than previous years with only 223 participants. The only nice thing about a small race is parking isn’t an issue. We parked a block away from the park and made our way to the start with a quick stop at the porta-potty. As we were walking from there to the start, the National Anthem was playing and I’m like shoot, that doesn’t give me much time to chill. So after that they sounded the gun. I was one of the last people to cross the start line…I thought for sure I was going to be last the whole way. ARGH!

The first half of a mile was flat along the railroad. I had the 11:00 pacer in my sights for this stretch. I was running pretty fast and I felt ok but I knew that if I tried to keep the pacer in my sights I would fizzle out in no time. It didn’t matter because I fizzled out anyways…I’ll get to that later. We turned up 5th Ave. and crossed Hwy. 95 as we made our way up the hill to Stagecoach Trail. I ran for a bit with a couple of ladies that I noticed were doing intervals. They were doing 2 minute running, 2 minutes walking. That was a bit too much walking for me so I bid them good bye during mile 2. Mile 2 was a long straight stretch with a modest incline of 75 feet. I noticed a lot of people walking during this mile up the one big hill. I tried to run most of the hill. We were rewarded with the first water stop at the end of the hill and mile 2. Mile 3 continued down Stagecoach Trail and eventually turned into a housing development and what would be the start of the uphill climbs. Mile 1 = 12:46; Mile 2 = 13:24; Mile 3 = 13:18

The Middle
Oh the hills…I knew they were coming, I saw it on the elevation chart when I signed up for this race and because we drove it the day before I really knew they were coming. Like with the other hill during mile 2, I tried my best to run most of it. They had race cones up every so 100 feet or and I would tell myself “run 2 cones and then you can walk to the next cone.” That really was my mantra for miles 4 and 5. The serious climbing was during mile 4 with over 120 feet of elevation. I know that doesn’t seem like much. Everybody around me was walking. I was the only one running at least part of these hills. I would get close to catching other people but I could never quite overtake them. This is really were I fizzled out. I thought I could recover by it wasn’t going to happen. The heat, humidity and these damn hills killed my legs. At the end of mile 4 was the next water stop. The volunteers at these water stops…all of them…were awesome. There was short downhill section after that but when we turned the corner at the bottom of the hill was the next climb. This one was worse than the ones during mile 4. This hill was almost 100 feet and it was a less than quarter mile. It was steep. I walked it, I didn’t care. Everybody around me walked it.  Once on top we started on a newly graveled road…thanks for that! And shortly after that was a nice long downhill. My quarter mile walk killed my pace for mile 5 and I never recovered, it was one of my slowest miles. During mile 5 I was passed by a speed walker…yes, walker. It was so crushing but boy could she move. I was amazed. I kept her in my sights for the next 3 miles but never could overtake her. Mile 6 was rolling but it was a net elevation loss of 20 feet, I managed to get back some time but my pace was still in the 14s. At the end of mile 6 was the second water stop. These guys were the best. They sprayed me down with water which felt amazing and they were so encouraging. They were truly the best and it made me feel good for the next 4 miles. Mile 4 = 14:26; Mile 5 = 14:40; Mile 6 = 14:19

The Finish
So those wonderful volunteers at the end of mile 6 gave me a boast and I had another under 13 minute mile for mile 7. Another thing was the nice downhill during mile 7 and running fast so the cops can let traffic through. Half way through mile 7 we popped back on to Stagecoach Trail. It is a fairly busy road and I didn’t want to make traffic wait for me any longer than they had too. During mile 8, we ran to Hwy 95. Hwy 95 is very busy road and we ran on the shoulder for over 2.5 miles. I continued counting cones except now it was run 3 cones, walking one. Just before the end mile 8 was the last water stop. Again they sprayed me which felt great. I refilled my water as I knew this was the last stop and I had two miles to go. I also tried some Gatorade…big mistake. Even though it was really watered downed, it did not agree with me. It really made the last two miles miserable. I should have just stuck to my water. Oh well. The time I wasted refilling my water bottles really effected my time which is why I had an almost 15 minute mile. I bet I wasted a minute refilling which means I probably would have had another under 14 mile. After the mile 8 water stop was a nice downhill into town. One benefit of running a major road is the wind of passing semis. There was no breeze which made the hot humid conditions unbearable. The occasional semi driving past gave enough of a breeze to temporary cool me down a bit. The down side to running on a major road was the massive amount of road kill you have to dodge. It was really gross and with the weather the past week you can imagine the unpleasant odor. I spent a bit of time plugging my noise! I was very happy to see the end of mile 9. Only one mile to go! The course turned down a residential street back to the park. They had volunteers at each street corner cheering us on. That was cool. One lady said, “you are going to beat the rain” I told her I wish it was raining! I was very happy to see Eric around a half a mile left to go. He had an ice cold water which was greatly appreciated. I rounded some corners and “sprinted” into the finish. Mile 7 = 13:58; Mile 8 = 14:58; Mile 9 = 14:43; Mile 10 = 16:03.

My total time was 2:23:22, which is over 7 minutes slower than the first 10 miles Grandma’s half marathon. I’m not happy with the time but considering the course and weather I’m ok with it. There were not too many people around at the finish line. They had a lot of ice cold water along with the usual post-race food: bananas, pretzels, and fruity snacks. Overall it was a nice run. The course was fine but if you don’t feel comfortable running on a shoulder with traffic flying past you at 55 mph, I wouldn’t recommend it. The first 5 miles of hills killed me. I should have trained more hills. But I don’t feel so bad because Eric struggled too and even (GASP) walked up a hill!

While sitting around the park trying to cool down, we could tell the storm was coming in and thankfully everybody finished before it hit. The temperature plummeted (after we were done of course!) And we drove in it all the way home. It was a slow drive home as a lot of people were stopping on the interstate. 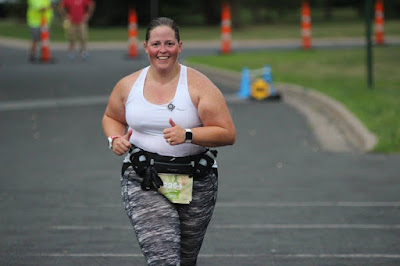 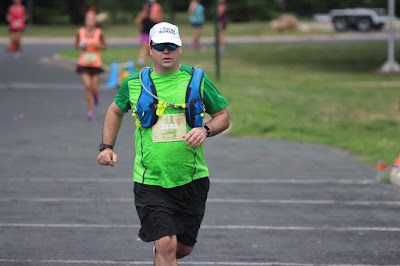 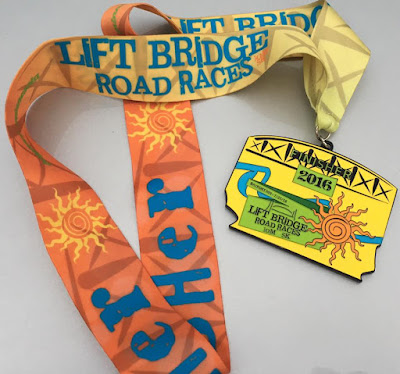 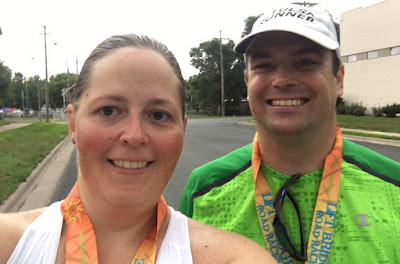 Posted by KimmerBee at 6:29 PM