July is always busy. With Eric refereeing soccer, my band concerts, Twins games and visits to Valleyfair our evenings can be busy. Since I last wrote, Eric had an emergency soccer game he had to ref, I had two concerts in Chanhassen and Hopkins and we had two Twins games…that was all in 1 week!
Valleyfair 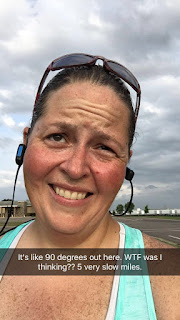 We had planned to visit Valleyfair’s waterpark on Monday since it was the hottest day of the week. But a last minute phone call from Eric’s soccer assigner meant he had a game in Minnetonka. So rain check for Valleyfair. Instead I did a 5 mile run. Well I only ran 3 because it was so stinking hot and walked 2 miles home. I was a hot sweaty mess! Like my “Snap” says, WTF was I thinking? It was 90 degrees but with the humidity it felt like 98 degrees. It was probably a bad idea, but I got the miles in.

So on Tuesday, after work, we went to Valleyfair. We ate some pizza and went to the waterpark. We hummed and hawed about if we really wanted to get wet. It was sort of warm at 80 degrees but it was WINDY! We finally decided what the heck and went on a couple of the tube rides and three times around the lazy river. We decided to do a couple other rides too. We spent a couple hours there.
Tempo Run
On Wednesday night I tried running again. This time it was much cooler at 81 degrees…hahaha. But the humidity wasn’t bad and there was a bit of a breezy so it wasn’t too bad. I got 4 fast “tempo” miles in and a 1.5 mile cool down to make it another 5+ mile day for me.
Chanhassen Concert
Thursday was a very weird day. It was cold and rainy. I wasn’t sure the concert would be happening. We had to stop at the EP Mall before to pick up my new contact lenses and on the way to the park in Chanhassen it poured. My concert looked doubtful. I get there and it wasn’t raining and the band was set up so I grabbed my stuff and set up. We played a warmup piece and then the rains came. It was about 5 minutes before the concert start time so we all tried to cover our music and wait for a decision.  Well the rain left and the radar said we were in the clear so we played on. The concert wasn’t too bad. There were a few brave souls that stuck around after the rain to hear us play so that was nice of them. I was soaking wet after the rain and the temperature was in the 60s so I was freezing the entire time.
Twins vs Indians (Game #1)
Friday after work, Eric and I went for a 3 mile run around Lake Harriet. It was a busy place since it was hosting the 2016 ILYA MC Invitational Regatta. There were people setting up chairs for the big event.  Of course there were the people in my way playing the new Pokémon Go game. It is some silly craze that hopefully will go away. Haha! After the run we went to the Twins/Indians game. It was DQ hat night. Unfortunately the hat is kind of lame. I don’t have a picture of it but trust me it isn’t cool. We stuck around until 9pm. My mom came up early and was sitting at my house. I was feeling like a bad daughter and wanted to get home to see her. We left it was tied…the Twins ended up losing so no big deal leaving early.
Hopkins Concert
Saturday was the annual Hopkins Raspberry Festival Battle of the Bands. We were the first band to play. It was a beautiful day for a concert. The weather was perfect. After the concert we transferred mom to my old phone. Her phone need replacing and my old phone wasn’t that old so took care of that and some other shopping. We had a cookout with our friends for dinner. It was a nice night too…until the rain came.
Twins vs Indians (Game #2)
I went for a very slow 8 mile run yesterday morning and then my brother, his girlfriend and her kids came up to go to the Twins game. It was a bit warm in our seats. We sat in our old section and I forgot that our seats were in the sun for the first 3 innings. My legs are sunburned! We had a fund time. The Twins lost (of course). After the game, my family left and Eric and I did some grocery shopping and just crashed on the couch and watched the movie “Eddie the Eagle.” 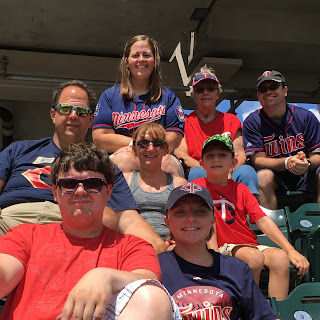 Another fun and busy week.
Posted by KimmerBee at 7:43 AM