We made a very quick trip to Chicago over the weekend for the Hot Chocolate 15K. Overall it was a great weekend.

The Chicago Expo was HUGE!  It was like the MCM expo. There was a ton of stuff and a very small space…at least it felt small. It was also very confusing. Getting the bibs were easy, finding the goodie bag not so much. But I put the blame on the guy who gave us our bibs. He directed us the wrong way. Oh well…volunteers. Since we are Hot Chocolate Alums (2015 Hot Chocolate Minneapolis), we get a special embroidered jacket with the city’s logo. So when we run the 2016 Hot Chocolate Minneapolis we will get one with Minneapolis skyline on it. How cool is that?  I really like Ram Racing the group that runs these runs. They are very organized.

The Start
We were in Corral P. The corrals started with A and went through W. 5k and 15K runners were mixed together in the corral as the first 2.5 miles was the same for both races. There were over 23,000 people in the 5K and over 12,000 in the 15K. It was an insane amount of people! It took us over an hour to get across the start line!

It was a chilly morning at 37 degrees at start time. Eric and I went to Goodwill on Friday and bought some cheap sweatshirts to wear before the race started and then we ditched them along the road before we actually started. It is a common practice and it benefits the poor as the clothes are collected and donated to area shelters. (And based on our quick tour of the city there are a ton of homeless people. They are everywhere. I’m not used to that in Minneapolis.)

The horn sounds and we are off…9.4 miles here I come. I was nervous about it for some reason. I wasn’t this nervous before the TC 10K and 5K but I guess I compartmentalized the two races so I wasn’t as scared but this freaked me out a bit. I know I can cover the miles the question is how fast and how will I feel!?

The First 5K
The first 5K was horrible. Not time wise but just scenery and smell. They start us off north on Columbus Street or something, I don’t remember. Soon we enter a tunnel or underground street. This messed up my Garmin and Eric’s Nike watch. My watch kept going but its pacing was screwy. Eric’s just stopped at .37 and stayed there for 4 miles. Ha! So anyways these “tunnels” were dark, dingy and smelled of sewer gas. It was horrible. We were “under cover” for the first couple miles and when we popped out they made us running under the “L” train elevated platforms. Not cool Chicago! I was so relieved when we eventually got to Michigan Ave and could be in the sun and away from the smell. Just before mile 3 the 5K’s turned left and we kept going for another 3 miles down Michigan Ave. There wasn’t much spectator support on this course and after the 5K turned the runners thinned out a lot. Don’t get me wrong, there were still a lot of runners but we weren’t on top of each other. My 5K time was 38:12 which seems a bit slow, I had 37 something. But whatever!

The Middle 5K
For miles 4 and 5 we continued down boring Michigan Ave. Like I said, there were no spectators so it was a lonely 2 miles. There was a water stop after mile 4. I stopped for some water and I had the most tremendous pain my left toes. This isn’t a new problem. My toes on my left foot always hurt at some point when I run. I blame my horrible toes on the Stai family. Anyways my left toes always hurt but I usually can walk or run through the pain. But the pain was the worst I ever felt, I actually started crying. I really wish I could figure out why they hurt so much. Well I walked a bit and then started running and then the pain just magically goes away. I don’t get it. I blame the toes for my slower mile 5. Mile 6 is a very annoying mile. It was an out and back. We ran a half a mile up turned around and ran a half mile back. It was in this area Eric and I had our usually pace fight. He said “that mile was 13 minutes” (which it wasn’t, it was 12:22). I told him “I don’t care!” My 10K time was 1:16:35 which was almost exactly what my watch said. It was very even with the 5K time too. Not my best (a minute off of TC 10K) but not horrible either.

The Last 5K
Right past the 10K marker, the Olivet Baptist Church choir was sing songs of praise for us. Not bad, what you would expect from a Baptist choir upbeat with lots of dancing. That was about it for crowd support. Mile 7 was where things fell apart for me. I was having a hard time running and wanted to just walk. I know that is bad. I still managed to get the mile in at around 13 minutes. During mile 8 we had to run another tunnel. I was exhausted by this point and walked the tunnel. It was just short of a quarter mile and surprisingly Eric walked the entire tunnel with me and never said anything about not running. We decided the best thing for him was to leave me and sprint to the finish. I’ll get there when I get there. I told him to leave me earlier but he made sure I got through the tunnel before taking off. I was so relieved when he left. I could walk if I wanted to without the guilt. I started running quarter mile intervals and walking 30 seconds afterwards. I think that was the only way I was going to make it for mile 8 and 9.  Shortly after we got out of the tunnel there was a marching band from Kelley high school. I love a good marching band! They pepped me up! The last few miles were crazy we did a lot of zig-zagging in parks and such. I don’t really know where all we ran. I know that we ran past Soldiers’ Field (which Eric didn’t even realize). There some mean hills during mile 9. This course is flat, except for mile 9. Bastards! I knew I wasn’t going to PR but I still wanted to finish in less than 2 hours. I sprinted (the best I could) the last 0.4 miles to the finish banner. I was so happy to see it. My time was 1:59.12. I beat 2 hours!!

The Pictures, Splits and Maps 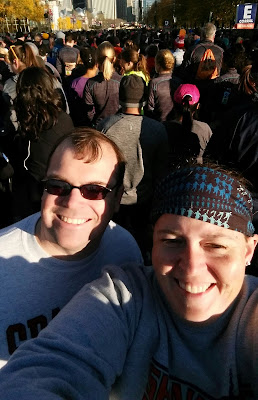 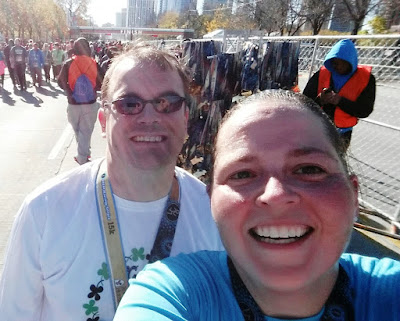 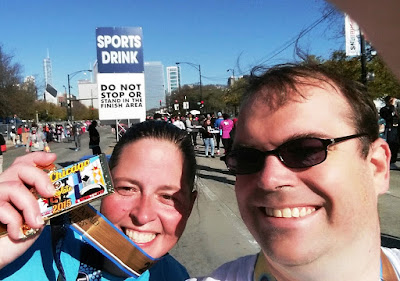 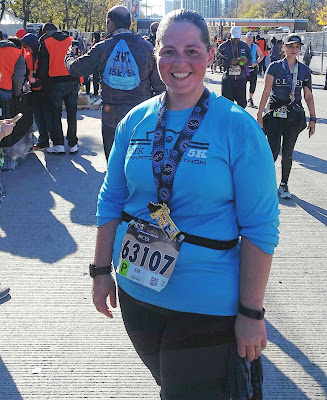 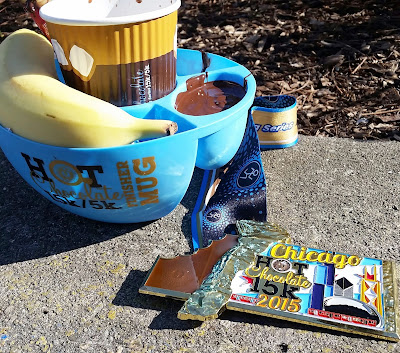 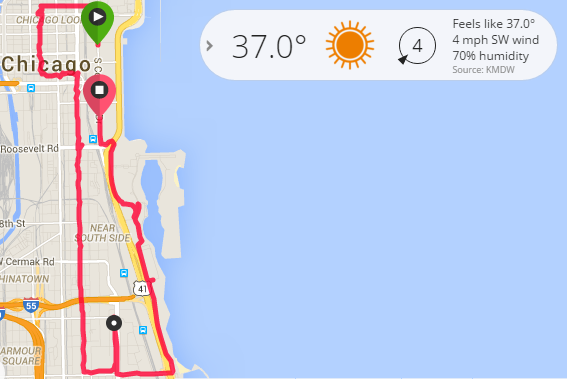 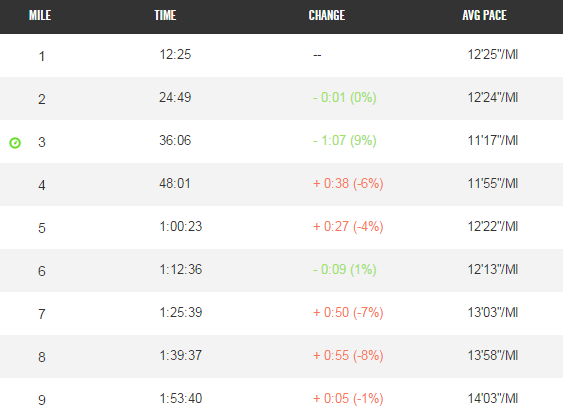 Posted by KimmerBee at 5:27 PM