I'm slow...very SSSLLLOOWWW.  My fastest pace is inside on the track.  Eric thinks I'm weird because he said that everybody runs faster outside. I think part of the reason why I run faster inside is I have desired pace per lap and so I run faster to make sure I make my goal.  When I'm outside, I don't have a consistent "lap" so I'm just doing it for...well...fun I guess. (GASP!)  I like to take in the scenery and as a result I am slower.

Yesterday I got a new toy. My "reward" for helping Eric type his paper for Cluster 2 was the Nike+ GPS SportsWatch. I'm in love with it!  It motivates me to keep running and run faster.  It shows my current pace and when it gets to slow I kick my butt into gear.  After each run I plug my watch into the computer and download my run. It is so cool because it shows a map of my run with the distance, pace and elevation.  And it is so much more accurate then my stupid iPod Nano (which I broke the screen recently)

Here are my runs by month. 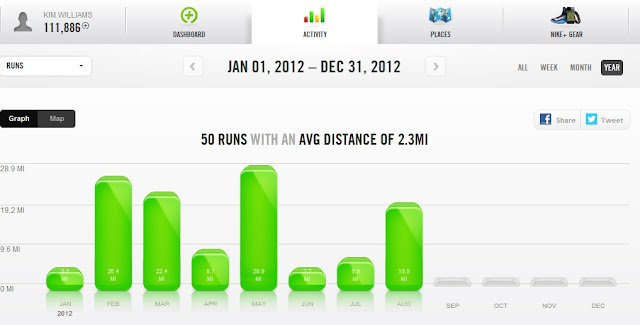 Posted by KimmerBee at 8:06 PM