My brief description of this race is “WET & MISERABLE.”

I didn’t enjoy this race at all. It was a very miserable from the pre-start of the race until the end. It was pouring when we started. I shouldn’t say it was all bad. My first 2 miles were really good. As I’ve mention numerous times in other posts, I’ve been running intervals lately to survive the longer distances. As a result, my ability to run straight has gone down the toilet. I managed to run almost 2 miles before I did a walk break…2 miles!  I felt pretty good. But the first few miles were flat, I knew what was coming up so I was banking some miles beforehand.

Around mile 2, I ran into Brenda. Brenda and I have seen each other at many different races in the Twin Cities and spent quite a bit of time on the relay bus and at the finish line of the Lake Minnetonka Half marathon, waiting for our relay teammates to finish the race. When I caught up to her on this day, she wanted to quit. I told her she absolutely could not quit. I don’t blame her for wanting to quit, it was miserable. It was still pouring. She asked if she could tag along with me and I said absolutely, I promised I’d get her to the finish line.

The course this year was different than the last couple years. We ran on West River Road which has been closed the last few years because of a landslide. I kind of wish it was still closed because it is hillier than all get out. And the hills are long which means going out is fast but eventually you turn around which means you are running up these long hills. Ugh!  For this particular race, the long up hill was mile 7. I could tell on the way out to the turnaround that I’d be walking up mile 7. I’m just not trained for hills and I don’t want to kill myself.

When Brenda and I got to the turnaround point there were very few people behind us. It was strange. I know there were more people behind us but where did they go. The police car, following the “last” runner was less than a half a mile away from me. What the heck was going on?  And where did the 15:00 pacer go? Where did the Sweeper go?  The course time limit is 15 minute miles. And we were well under that pace. I found out after the race that for some reason, race officials made the slower runners divert to a shorter course. Basically they told them to turn around over a mile before the actual turnaround. Eric said the diverted runners only did 7 miles of the 9.35 mile course. I have no idea why, my guess is the weather was a major factor. So Brenda and I were literally the back of the pack. I think 30 people finished behind us.

On the way back to the finish we did a lot of walking. Most of the first 5 miles were flat or downhill so we were paying for it now. We would run occasionally but mostly we walked it. Ha! We ran into a couple of people that we talked with but ended up leaving them when they stopped for this or that. As far as course support goes, it wasn’t great. There were no candy stations this year, I think the crappy weather was the reason. There were a few occasions I was relieved I brought my own water because the water stops were so far apart.

When we got to the last quarter of a mile the cop actually told us to get on the sidewalk. We thought it was strange because we were only 20 yards behind the people in front of us who were allowed to continue on the road. Brenda and I said screw it and went back to the road and sprinted to the finish. When we got to the finish line they were already taking it down! What the heck!  We were still over 5 minutes ahead of the course time limit so this was just ridiculous. Thankfully I still got my chocolate at the end!

Eric and I decided that we probably won’t do the Minneapolis Hot Chocolate 15K run again unless the medal is too fantastic that we have to. I’m ok with this as my goal is half marathons now.  My mile splits are terrible but I have to remember, I was getting Brenda to the finish line so I probably wouldn’t have walked as much as I did.  But for sure mile 7 was screwed no matter what. 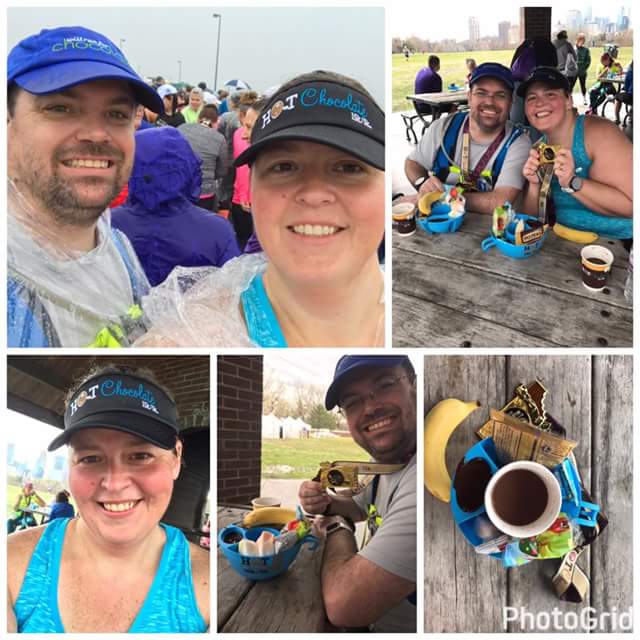 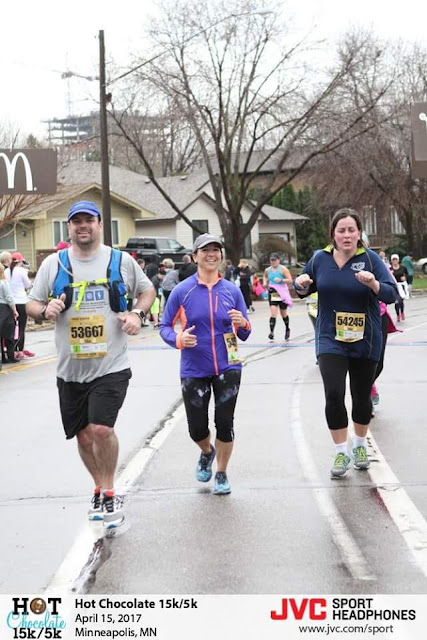 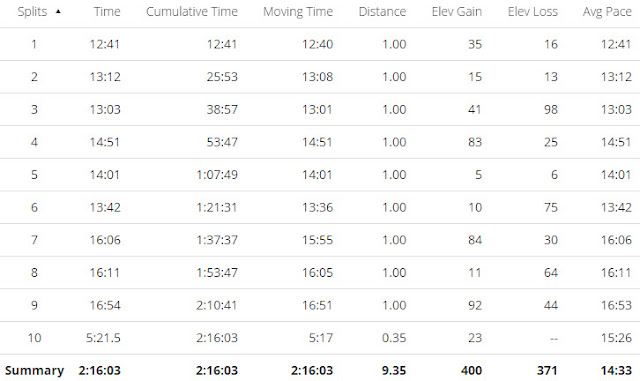 Posted by KimmerBee at 9:51 PM