Well our road trip is going pretty good so far.  We drove to Lamoni, IA last night (about 3 miles from the Missouri border).  Nothing too exciting yesterday

Today we started off heading toward Kansas City.  They finally finished the new bridge they were building the last time were drove through. It is very cool looking.  Our first stop was Fort Scott, KS.  That was after a 6 mile oops when we got on Hwy. 69 too early. Stupid highway crisscross Interstate 35 so many times and I got suckered in to taking it too early.  So we had a 6 mile tour of Overland Park, KS.  We eventually got on the expressway.  Fort Scott has this this very cool fort. It was started in 1842 as part of a line of forts lining the "western" part of the US.  It was to fend off those Native Americans.  It was also used during the civil war.  It was very interesting...but boy was it HOT! 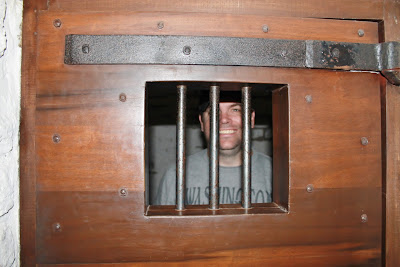 After Fort Scott we made the long way to Arlington, TX.  The one thing I can say about Oklahoma is they have a lot of phantom construction areas.  Rarely when the sign said you were entering a construction zone did you actually see construction.  One section said "Road Construction Next 30 miles" Really?  Never saw any construction.

Like every other road trip we have ever been on, we forgot a few things and need to stop at Wal-mart/Target.  Well lucky for us there is a Wal-Mart just a 1.5 miles away from our hotel.  We decided that we would stop there first before going to the hotel...MISTAKE!  Well the Wal-mart is across the street from the new Cowboys Stadium...and the Cowboys have a game tonight.  Every road around the stadium is closed with cops around.  We drove around and around and could not get into the parking lot. ARGH!  After 20 minutes of trying to get there we finally gave up and came to the hotel.  So no sunscreen, toe nail clippers or Q-tips for us tonight.  I think we will survive.

Here is the awesome stadium at night: 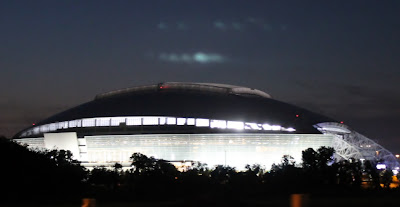